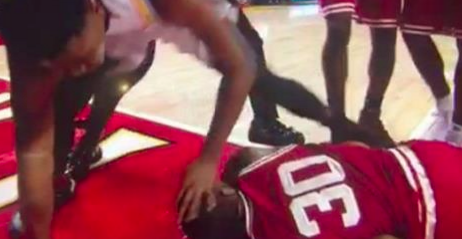 Last night the Maryland Terrapins were playing the Wisconsin Badgers in a little college hoop action. Things were running as planned until Maryland’s Diamond Stone decided to pull the ultimate dick move when he became a baby and lost his cool. Here’s Stone crushing Badgers’ forward Vitto Brown’s head into the court.

Here’s a slow motion look at it.

Even though the ref was right there, he missed this cheap shot and Stone was allowed to stay in the game.

Biggest indictment of #B1G officiating I've ever seen is Diamond Stone not getting ejected for this. #WISCvsMD https://t.co/v57G87505Q

Who could possibly be surprised that a ref missed that? I can’t say that I am, considering just how bad they’ve been in all sports over the last few years. Stone should be suspended immediately for that coward move and the refs NEED to be addressed for missing this.