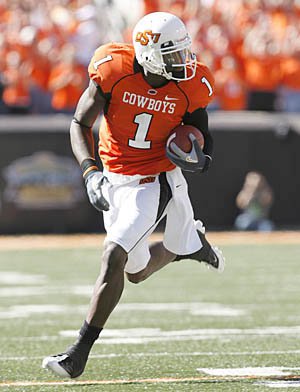 When a major college football program unveils new uniforms these days, it has to be a big spectacle in and of itself. It says so in the rules somewhere. Notre Dame was the unofficial winner in 2015 when coach Brian Kelly pulled the curtain on the team’s green Shamrock Series uniforms, and then awarded a scholarship to a walk-on.

This year, the Oklahoma State Cowboys are the current clubhouse leaders after bringing in a few masked models on Wednesday to show off the new unis and get the squad fired up. As it turned out, former All-American Cowboys’ receiver (and current Cowboys’ receiver) Dez Bryant was one of the three men under the helmets, along with fellow alumni Brandon Weeden and Dan Bailey. The team’s Twitter account captured the moment below:

When @DezBryant, @bweeden3 and Dan Bailey help you unveil your new uniforms to the team. #okstatehttps://t.co/lg69agZtOj

No word on whether Jeffrey Lurie plans to finally listen to Eagles’ Nation and bring back the kelly green uniforms. If so, here’s hoping it’s Randall Cunningham, Seth Joyner, Clyde Simmons and Wes Hopkins modeling the old gear with “Buddy’s Watchin’ You” blaring in the background.