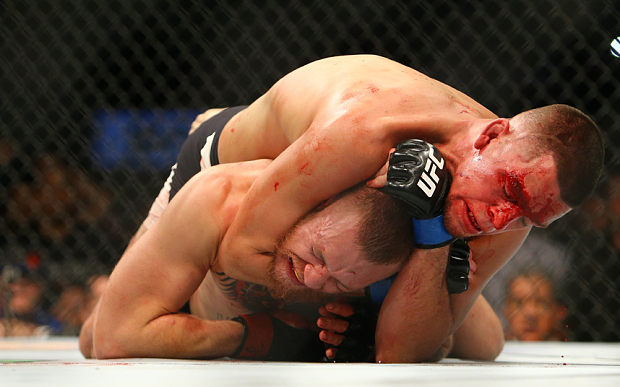 It was quite the entertaining night at UFC 196 last night. Two of UFC’s “best” got choked the hell out and now UFC President Dana White is left dealing with the fallout. In the night’s main event, Conor McGregor suffered his first UFC defeat at the hands of Nate Diaz. Here’s how it went down.

A lot of people were shocked with that ending, but one guy that wasn’t was Diaz himself. Take a listen to this from Diaz, which is NSFW.

Meanwhile, it looks like Holly Holm’s 15 minutes of fame are up, as she suffered the the same fate as McGregor did. I’ll give Holm credit though, she fought a good fight. Miesha Tate dragged Holly Holm to the ground and choked her out in the fifth and final round to become the new UFC Women’s Bantamweight champion.

Holm was scheduled to fight a returning Ronda Rousey next, but that fight will not happen. According to Dana White, Tate will now defend her title against Rousey.

Of course, the Internet had a field day with both McGregor and Holm losing. Check out some of the best reactions on twitter.

Dana White's plans for McGregor and Holm after #UFC196 pic.twitter.com/60pmBpQaxp