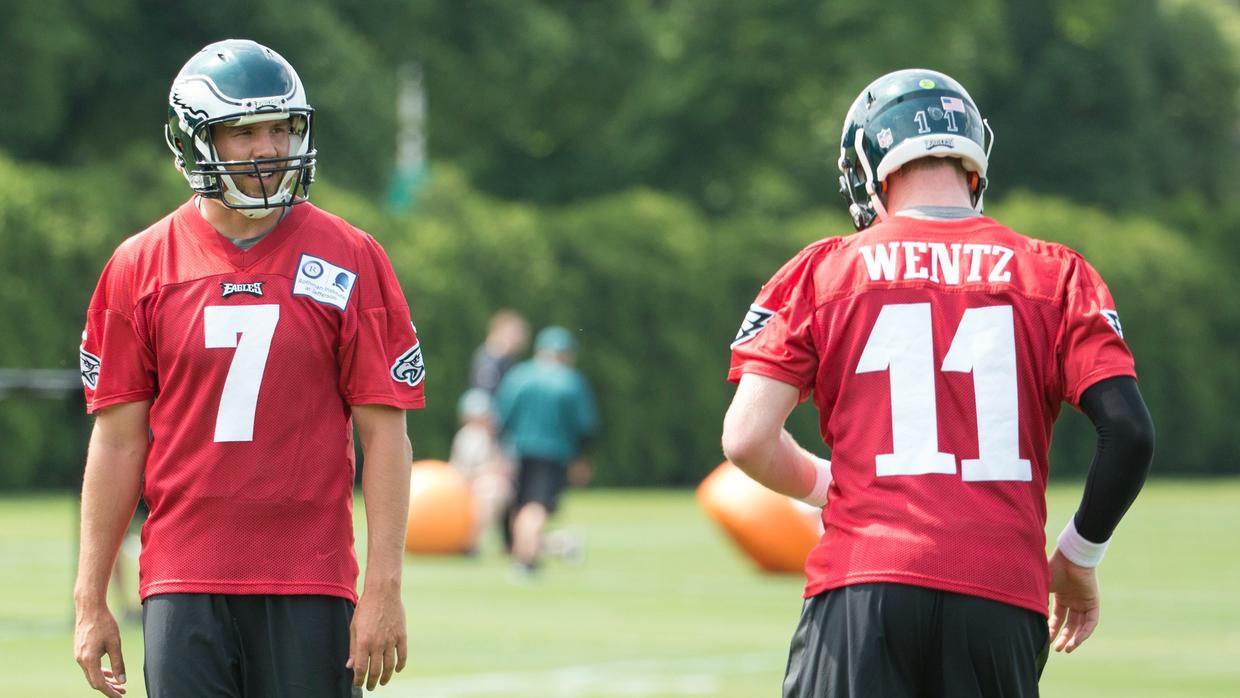 Philadelphia Eagles head coach Doug Pederson and vice president of football operations Howie Roseman have insisted time and time again that Sam Bradford is the starting quarterback for this team heading into this season.

Many fans, meanwhile, can’t wait to run Bradford out of town.

Offensive Coordinator Frank Reich didn’t help matters last week when he stated on the WIP Morning Show that Bradford is not the clear-cut starting quarterback. Then came the following report from NJ.com’s Matt Lombardo this past weekend.

The rookie Carson Wentz is reportedly learning Pederson’s offense quicker than Bradford, who is yet again digging into a new playbook.

One of the biggest question marks facing Wentz after he was chosen No. 2 overall out of North Dakota State was; how will his game translate at the next level? It has only been two public practices, so there can’t be enough of a sample size to make an absolute determination, but so far so good. Wentz has shown a plus-NFL arm, accuracy to make every throw on the route tree and an ability to move the pocket and buy time”Not for nothing, but Wentz also seems to be ahead of Bradford in terms of mastering Pederson’s offense,” Lombardo said.

This is being overblown. Sure, it’s nice that Wentz is grasping the playbook quickly, it’s nice that he doesn’t seem overwhelmed making the transition from the FCS to the NFL, but we’ve still yet to see how well he can grasp reading an NFL defense.

I just talked about this sort of thing in my weekly Catching up with the Birds post. It’s May and the Eagles are practicing without pads. Don’t take anything you see or hear right now too seriously.

Lombardo hinted at that as well.

And hell, it doesn’t even surprise me that Wentz is picking up the playbook faster than Bradford. He’s off-the-charts smart. Wentz never had anything less than an A in school and scored a 40 on his Wonderlic test at the NFL Scouting Combine, which bested all the quarterbacks.

Maybe Wentz is just better at soaking up new information, or perhaps Bradford is still a bit perturbed about the Eagles trading up for a quarterback and his head still isn’t in the game.

I’m not putting too much stock into this.

So I guess Chase Daniel should start, he knows the playbook more than anybody.