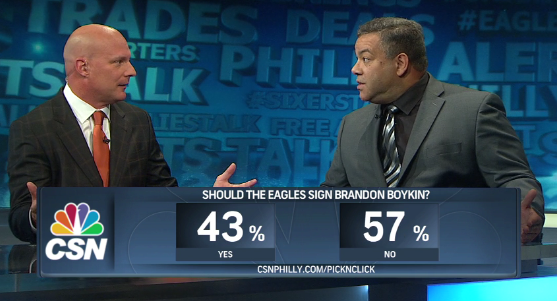 Earlier today on Philly Sports Talk, Dave Spadaro and Marcus Hayes were ready to play a rousing game of Quick 6, but their disagreement over whether the Eagles should re-sign Brandon Boykin after he was released by the Panthers earlier in the day took precedence over everything.

Ellis walking off the set was a nice touch. But that wasn’t all. Spadaro took a shot at Hayes after Hayes took a shot at Spadaro. Spadaro said the newspaper business sucks and Hayes was none too pleased. THE GLOVES ARE OFF!