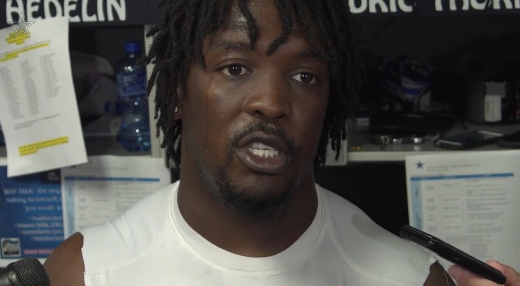 Cedric Thornton was a good player for the Eagles. He became an unrestricted free agent this offseason and decided to sign with the Dallas Cowboys. With Howie Roseman going on his re-signing rampage for all of the current pieces on the Eagles’ offense and defense, letting Thornton go probably won’t hurt the team much in the long run.

Thornton is already making waves in Dallas, and it might be for the wrong reasons. Organized team activities are generally to get up to speed on the team’s offensive and defensive schemes and have less to do with contact. In fact, there’s really little to no contact in those drills during OTAs.

Thornton probably didn’t think much about that as he talked to Dallas media on Wednesday. When talking about how he was adjusting to the Cowboys’ OTAs, he described it like this:

A lot more aggressive,” Thornton said. “A lot more impact in our walk-throughs, and expects us to be more conditioned than we was in Philadelphia.

I mean, it’s fine for him to say that now in regards to playing for a new team. He’s working under a new head coach in Jason Garrett and Chip Kelly’s practices were often criticized by his own players. And the Eagles under Doug Pederson have a differently run OTA schedule than Kelly had, so it’s not the same this year than it was last year.

But Thornton specifically said it was more aggressive and and had a lot more impact, and that may have piqued the NFL’s ears a little bit. Too much contact will be looked down upon and the Cowboys could face possible discipline if their OTAs and practices are deemed not in line with the current collective bargaining agreement.

And, yeah, this is my way of fueling the Eagles-Cowboys rivalry in the summer. Sue me.