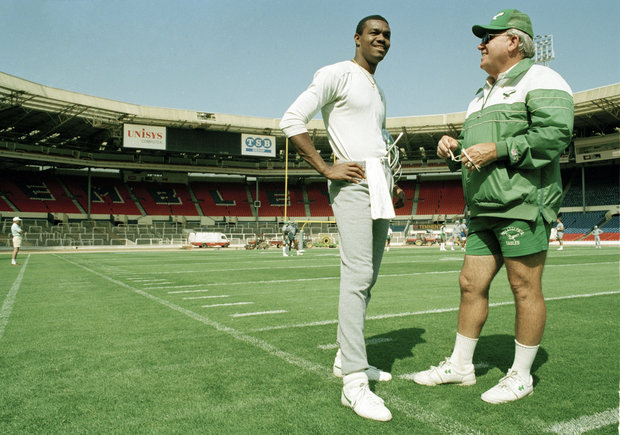 Buddy Ryan was a lot more than a defensive mastermind. He was also a motivator and a confidence builder. He was cutting edge, did things his way and didn’t care what people thought about it. He was an innovator and despised quarterbacks.

At least most quarterbacks.

Former Philadelphia Eagles signal caller Randall Cunningham sat down with Rob Ellis and Harry Mayes on 97.5 The Fanatic Tuesday to discuss the legacy of Ryan, who coached the Eagles from 1986-1990.

“He did a lot of great things, he was cutting edge, he was new, he was innovative. He didn’t care about what people thought. He knew how to make things work,” Cunningham said.

Cunningham discussed what Ryan meant to the players.

“He loved his players,” he said. “One minute he’d have you upset willing to throw in the towel, but the next minute he’s encouraging you like nobody else could encourage you.”

“He told us to be hard-nosed and go out there and hit them in the mouth. We took on his character, many of us still walk with that bar room brawling type of mentality. It changed us, it made many of us who played for him into the people we are today. Confident, bold and powerful. But he was a man of integrity as well.”

Cunningham also talked about what Ryan did for his career.

“He was very inspirational in my career in a time when not many African American quarterbacks were getting an opportunity, he thrust me into the action and said look buddy, ‘I believe in you Randall and you’re going to be my man'” he said.

And what was Ryan’s philosophy of offense?

“He wanted things basic, simple and plain. He wanted you to just hit people in the mouth, go out and play ball. If you made a mistake, make a mistake going full speed. When it came down to offense, he allowed us to use our character and our ability to the best of our ability. He wanted me comfortable doing what I felt like doing,” Cunningham said.

“He said ‘this kid, when the plays breaking down, this kid’s going to get you 30-40 yards or he’s going to launch a bomb. He might take a sack once in a while, but he’ll make it up later.’ He developed something in me, which was confidence. It gave me confidence to go out and feel like I was invincible. And it was all his coaching style.”

Check out the entire interview here.