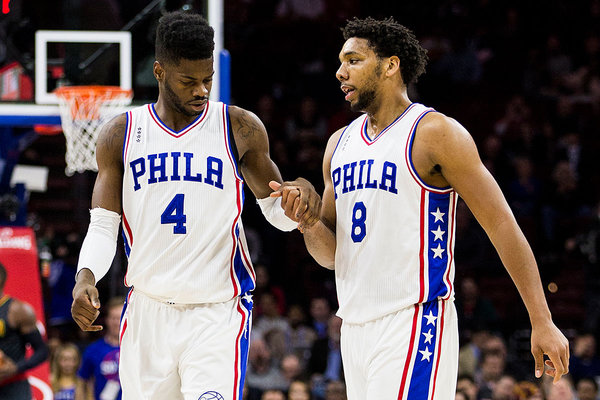 In addition to the Sixers drafting Ben Simmons first overall tonight, the team has also been linked to having trade talks with the Boston Celtics regarding either Jahlil Okafor or Nerlens Noel. Noel, who’s from the Boston area, reportedly is held in higher value to the Sixers than Okafor. In turn, the Celtics also value Noel a little bit more than Okafor, according to reports, so there’s been a kind of stalemate.

If the two teams don’t agree to a deal before the draft begins, the Celtics’ pick might dictate if the two sides are still negotiating or if talks have died.

According to Liberty Ballers, by way of Celtics Blog, the Celtics might not see another offer as good as the Sixers’ one. Of course, there’s still plenty of time between now and the draft, and teams would be stupid to cut off communication right now.

[Celtics GM Danny] Ainge’s refusal to tip his hand essentially forces teams to deal with him if they want to be guaranteed to land their favorite player in the draft. It’s brilliant.

Meanwhile, according to ESPN’s Marc Stein, the Celtics have made offers to the Bucks, Jazz and Bulls for the likes of Jabari Parker, Khris Middleton, Gordon Hayward and Jimmy Butler. As of Wednesday night, they were still getting rebuffed.

The best offer they’ve received? The Sixers are willing to part with Jahlil Okafor for the No. 3 pick. While interested in Okafor, the Celtics want more.

The Celtics might be able to pry a second-rounder from the Sixers along with Okafor if Colangelo really wants that third pick. As of now, it seems like both teams are playing a cat and mouse game. If anything breaks heading up to the draft or during the draft, we’ll be sure to bring it to you.