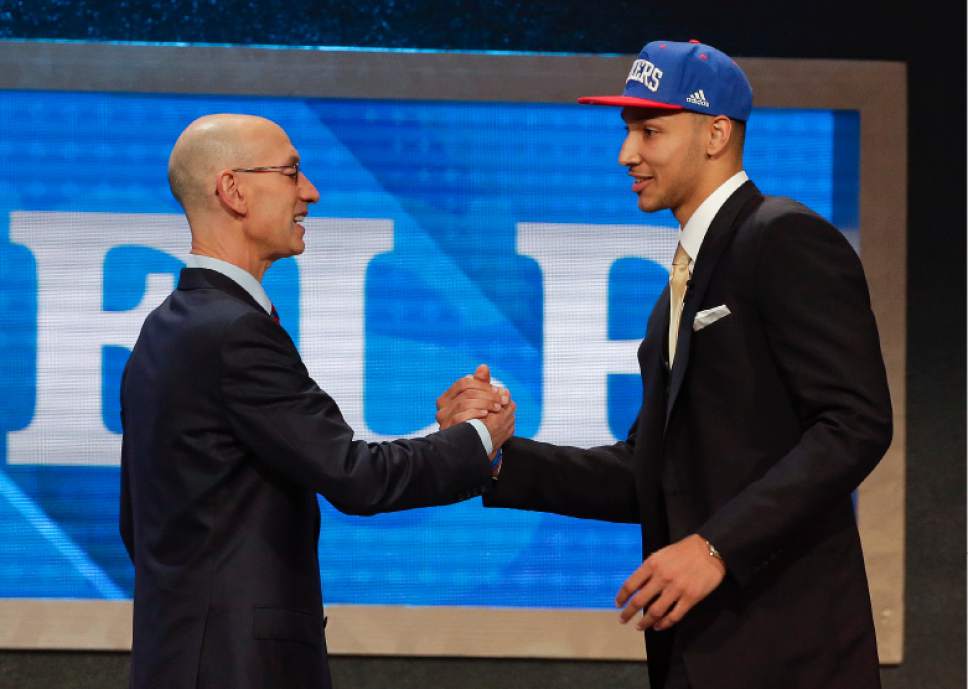 Oh, what a night! Last night was the culmination of “trusting the process” for the Sixers organization. To no one’s surprise, the Sixers selected Ben Simmons from LSU with the number one pick in the draft. Yes, the team still has plenty of needs to fill, but if you’re not excited with the direction that the Sixers are heading in, it may be time for you to take a deeper look at yourself and get your head examined.

Don’t get me wrong, I don’t think that Sam Hinkie did everything right in his tenure as Sixers general manager. He was essentially a fantasy sports GM. Sometimes it felt like he was just making trades for the sake of making trades. And yes, we went from having some potentially good point guards to not having any. But, if you think that the Sixers were actually going to contend for anything other than a sub 500 record and sixth place in the Eastern Conference if he didn’t make any trades, you’re fooling yourself. If you’re okay with being average or below in life, that’s you. That’s not me. Sometimes you have to have a pair of big balls and take risks.

The Eastern Conference for the longest time has been dominated by any team that LeBron James is on and until a team can put a legitimate contender up against one of his teams, the East will always be won by his team. It’s just the harsh reality. Do I wish there were teams that could take a LeBron led team down? Hell to the yes. But, it certainly wasn’t going to be this Sixers team as previously constructed.

So I have to say, seeing the below tweet made me very happy.

The Sixers now have a core of Simmons, Dario Saric, Jahlil Okafor, Nerlens Noel and Joel Embiid. I know that at some point Noel or Okafor might be moved and while I prefer it to be Noel, I trust that we will get the right piece(s) in returned.

One might think that Skip Bayless leaving ESPN and that clown show that he was on with Stephen A. Smith, that perhaps Bayless would be less of a jackass. But that’s not the case. Bayless has always been one of those guys that is starving for attention. He says the most outrageous comments. In fact, he’s never let a fact get in the way of one of his arguments. He’s a well known Philly hater. And when he’s not spending time moonlighting as an “entertainer” on television, he spends most of his life on his knees, sucking on the teat of the Dallas Cowboys. He’s one of the biggest fanboys for that trashy organization. He lives for dissing the Philadelphia Eagles.

So on a night that was huge for the city of Philadelphia, he still couldn’t let us have our moment. He tweeted the following.

Doubt Philly fans will be all that patient with Ben Simmons if he goes passive and disengages the way he sometimes did at LSU.

While not as outrageous as some of his comments directed at the Eagles, why can’t he just shut the hell up and leave Philly’s name out of his mouth, especially when talking about Philly fans? If he was a legit basketball analyst, that’s one thing. But, he’s a clown! He always has been and always will be.

Philadelphia fans are the best in the world. We’re passionate about our sports and you’re damn right we demand the best out of the players that play for this city. Our fans get a bad reputation for a few bungholes and their actions. Mind you, every city has a few jackass fans, but the national media seems to get the biggest boner when there’s an incident here.

I’m tired of know nothings thinking that they know who Philly fans are. They don’t know jack. So when I hear an assclown like Bayless take a subtle dig at us, you’re damn right it fires me all the way up.

Skippy: know your role and shout your mouth.