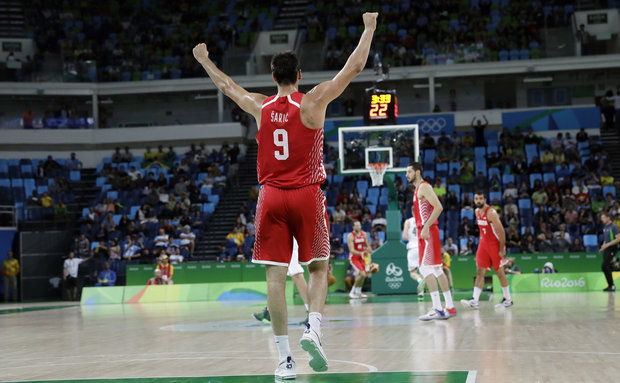 Dario Saric and his Croatian compadres headed into Monday’s Group B finale knowing they would either win the group or potentially go home.

With the pressure on his shoulders, Saric delivered arguably his best performance of the tournament.

The Croats will play Serbia in the quarterfinals Wednesday and wouldn’t have to face the United States until the championship game. They also avoided Spain and Argentina on their side of the bracket. All four teams that advanced from Group B finished with a 3-2 mark.

Whether somebody talked to him after the Nigeria game or he decided to do it on his own, Saric’s assertiveness was at the level I was hoping it’d be in his last game. He took only five shots against Nigeria and netted just seven points, despite being matched up with a smaller defender in the post several times throughout the game.

With an overwhelmed Mindaugas Kuzminskas guarding him, Saric took over the game in the second quarter, pouring in 11 points during a six-minute span with the skinny Lithuanian failing to keep up on most of those field goals. The impressive stretch helped Croatia go in front after Lithuania led 23-15 following a quarter of play.

Saric tallied 15 of his 18 points in the second and third stanzas where Croatia outscored Lithuania 62-34 and held a commanding 75-55 advantage heading into the final frame.

That’s some clutch play in a must-win environment, finishing 7-of-12 from the field overall. Now let’s take a look at some of the clips, starting with that incredible run during the second.

Saric is a fantastic ball handler and although he’s not the most athletic, he’s very smart and uses his eyes to manipulate defenders. He lulls them to sleep by looking away, doing so here against Domantas Sabonis before quickly crossing over and getting to the rim.

Great crossover by Saric on Sabonis at the top of the key before finishing at the rim. pic.twitter.com/xDcGhlKRQM

Here’s Kuzminskas guarding him. Saric was easily able to obtain post position, quickly faced up and took a pair of dribbles along the baseline prior to bumping off him and converting the easy layup.

Saric turns to face up after getting position on block, takes 2 dribbles, bounces off body to create space & easy FG pic.twitter.com/vmOy4yOUL9

Saric secures post position on the right block again, fakes Kuzminskas out with some nifty footwork, but Sabonis provided some solid help defense on this occasion.

I like assertiveness from Saric, overwhelmed defender on him, didn’t see this against Nigeria. Sabonis good help D. pic.twitter.com/tC8RrJ5qJq

And more aggression from Saric, taking Kuzminskas off the dribble and drawing a foul.

Saric with another take on Kuzminkas and draws a foul pic.twitter.com/MC1j7F1qxM

Lithuania attempted to put another defender on Saric, but he got Kuzminskas again on a switch and easily backed him down for another easy two points.

Saric making mincemeat of Kusminskas again, got him on a switch this time pic.twitter.com/Z43uPlOLXd

Now with Valunciunas on him, Saric makes the big man defend him on the perimeter. Again he uses his eyes to lull Valunciunas to sleep before rising and knocking down the right wing 3.

Lithuania with Jonas Valanciunas on Saric now. Dario lulls him to sleep before rising and swishing the right wing 3. pic.twitter.com/y8ewC68r54

Saric showcased the handles and the quick crossover again in the third quarter, easily beating his man along the right wing and laying the ball in for the bucket.

Saric with the handles again, quick crossover along the right wing before laying it in pic.twitter.com/sqkhjzBMfQ

I’ve referenced Saric’s ability to grab the defensive rebound and heading the other way before, here’s another example of it. He doesn’t have the explosion like Ben Simmons does running the one-man fastbreak, but the Sixers are about to have a pair of 6’10 players who have to ability to do this. That’s scary.

The Sixers are gonna have a pair of 6’10 players that can grab defensive rebounds and do this, that’s scary! pic.twitter.com/Ick5zbTMWI

Croatia has done a good job of masking Saric’s defensive inefficiencies and playing to his strengths on that end, which is his help defense and blocking shots. He really struggles with quickness, both on the perimeter and inside. We saw that here on one of the few times he got put on an island defensively. Sabonis was able to beat him with a quick shoulder shake, but was unable to convert the field goal.

Saric struggles against quickness on D, in post & perimeter. Sabonis with a quick shake in post, couldn’t finish. pic.twitter.com/1nEVEgNBYg

Check out more of Saric’s performances in the Olympics below.