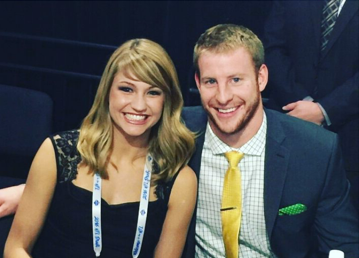 Carson Wentz isn’t just winning on the field. He’s also winning off of it.

The world was introduced to Wentz’s girlfriend, Melissa Uhrich, thanks to this article from the NY Post. Uhrich went to Concordia College in Minnesota, and ran cross country. The two will likely get married in the future – probably after Wentz is named the MVP of Super Bowl LI.

But this bit might be my favorite part of the article, which demonstrates Wentz’s drive to become the best quarterback he can be. Unfortunately, it’s at the expense of Uhrich while the two are eating dinner.

Philadelphia’s prized franchise quarterback, Uhrich continues to support him as she did during their college years. And while she won’t hesitate to take his cellphone away during date nights — he was caught watching game film under the dinner table — she understands how much her boyfriend is dedicated to his craft.

I love it. Something tells me Uhrich is going to become a very popular figure in Philadelphia.