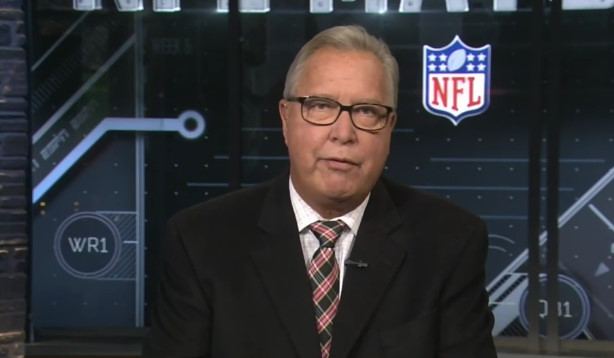 There are things I’ve agreed with and disagreed with that have come out of Ron Jaworski’s mouth over the years. Overall, he’s pretty loved by this city and, hey, he’s taken the Philadelphia Soul to two ArenBowl championships. He’s a proven winner, right? Right. Anyway, Jaws was a guest on PTI Thursday night previewing the beginning week of the 2016 NFL season, and he had some comments on Sam Bradford.

Jaws gleamed when talking about Bradford, saying he was one of the most accurate quarterbacks last season and could wind up taking Teddy Bridgewater’s starting job in Minnesota for good. He talked about Bradford like he was a bonafide Hall of Famer.

Here’s what Jaws had to say:

“Sam Bradford is a pro. Wherever he’s gone, he’s handled the situation very, very well. And you go back to last season in Philadelphia – you know, this offseason I looked at all the throws of all the quarterbacks – Sam Bradford had a very good year. He was arguably the most accurate quarterback in the league a year ago. He had an outstanding preseason this year. He’s a pro. So he’s going to system in Minnesota where they’re going to run the ball, number one, where they use the play action passing game. That’s gonna give Sam the opportunity to utilize his accuracy on the deep ball. I think it’s a really good fit for the Minnesota Vikings.

Bradford didn’t handle it “very, very well” when the Eagles traded up to the second overall spot in the NFL Draft this past year. But, hey, he got what he wanted and now he’s no longer an Eagle. And the Vikings were ready to go full-throttle ahead with Bridgewater as their quarterback of the present and future. One good year from Bradford will completely destroy all of their plans? I don’t see it.

Last year, Jaws was weary of the Eagles committing to Bradford long-term due to his injury history.

“The question the Eagles need to ask is not necessarily the talent aspect of it, but is he the right guy for the future,” Jaworski said Monday before appearing at a news conference at the PPL Center to announce that the Soul would be playing a game at the Allentown venue in July. “Is he a guy that can stay healthy for the future? Those are questions they have to answer.

“I think from a talent standpoint Sam is a fine NFL quarterback that can help any team that he’s with.”

Nobody’s talking about his injury history this season, but it should be in the back of everyone’s minds. Even though Chase Daniel and Carson Wentz were the second and third-string quarterbacks, respectively, when Bradford was here, the questions about his health and durability were always at the forefront. Earlier this year, Jaws came around on Bradford and was happy when Doug Pederson named him the Eagles’ starting quarterback.

Do you think Jaws is over-hyping Bradford a little bit, or did you see some of the same stuff he did from Bradford?

You can watch Jaws’ comments on both below.