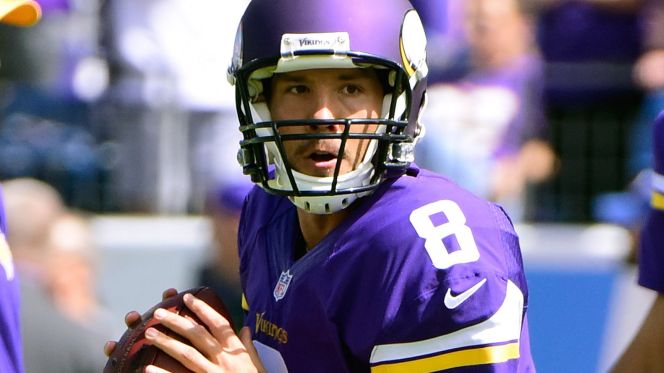 Sam Bradford already knows what his reception is going to be like when he takes the field Sunday in his first trip back to Philadelphia since being traded to the Minnesota Vikings right before the season.

“What type of reception do you guys expect?” Bradford said via conference call on Wednesday.

Turns out the deal was a win-win for both teams. The Vikings are 5-0 and Bradford is playing like an upper echelon quarterback, while the Eagles were able to obtain a first-round pick they previously didn’t have and sped-up the process of getting Carson Wentz out on the field. Doug Pederson also talked about it.

“In our case, our first-round, second-overall pick getting a chance to play this early, getting his feet wet, learning, putting us in a great spot, a 3-2 (record). He’s played a lot of football. He’s getting better every week. And from their standpoint, they got a good quarterback.”

Bradford, entering the season 100 percent healthy for the first time in years, is having the best start of his career so far, posting a 109.8 quarterback rating to go with six touchdowns and no interceptions. He’s completing 70.4 percent of his passes. Here’s more of what Bradford said, via the Eagles’ website.

“It is a little strange. If you would have told me six weeks ago that we were getting ready to play this game, I would have thought that I’d be playing for the Eagles getting prepared to play the Vikings. The fact that it’s the other way around and I’m playing against the Eagles; it’s definitely not something that I expected.”

He stated that the trade was “completely off the radar” but also admitted that he’s been keeping close tabs on the Birds.

“I’ve tried to watch them when I can. I still have a lot of really good friends on that team, I enjoy watching them play and I enjoy watching them have success. I’ve tried to watch as much as possible. From what Carson (Wentz) has done, it’s been awesome to see him play the way he has, and it really doesn’t surprise me. If you look at where he came in during OTAs, the progress he made and the way he was playing at the end of Training Camp, he was playing at a really high level, so for him to come in and have the success that he’s had, I don’t think it really surprises me.”

With Wentz vs. Bradford tabbed for what could be considered a must-win for the Eagles, it’ll be extremely interesting to see what type of game we’ll see.