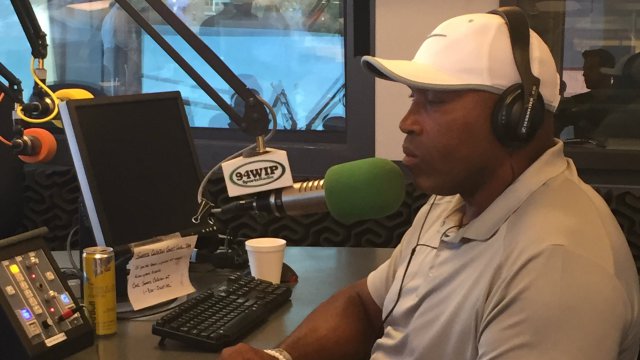 Former Eagles linebacker Seth Joyner joined the new WIP midday show yesterday with Joe DeCamara and Jon Ritchie, and, well, what a way to welcome the new duo to afternoon radio in Philly. Joyner talked about when he left the Arizona Cardinals in 1996, before joining the Green Bay Packers (1997) and Denver Broncos (1998), in which Cowboys owner Jerry Jones called him personally to get him to sign with the Cowboys.

“I didn’t like the Cowboys when I came [to Philadelphia] and I had new found hatred after I played here for one year. And it wasn’t just divisional, it became a personal deal. And just so you know how deep that hatred runs, when I left Arizona [in 1996], Jerry Jones called me personally and tried to get me to become a Cowboy … I said, ‘There’s no way in hell I would ever wear that star on the side of my head. Never!'”

“And then they don’t draft me and I get drafted to the Eagles and we’re gonna be playing them twice a year. And now I’m just foaming at the mouth and frothing at the mouth at the opportunity to not only play against that team, but as an eighth round draft choice you begin to take on the mentality that you were passed over — what? 30 teams at that time. You were passed over 30 times, times seven.”

“That hatred goes way beyond my personal hatred, because once you become a Philadelphia Eagle you embody the fans, the mentality of the fans, the mentality of the city,” Joyner said. “The Eagles could go 0-14, just as long as they beat the Cowboys twice. And I think the fans will be a little pissed — a lot pissed — but they will revel in two victories every year against the Cowboys.”

Awesome. You don’t see stuff like that much anymore due to the almighty dollar. I get it. But this is a pretty cool story.