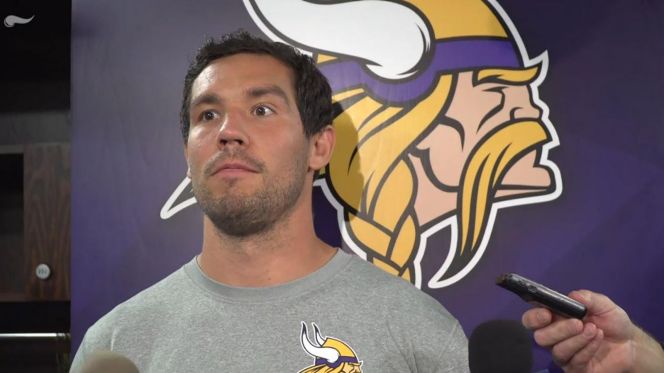 After the Vikings suffered their first loss of the 2016 season yesterday at the hands of the Eagles, people pointed to the Eagles’ defense and Carson Wentz limiting mistakes as being the two key factors in their decisive victory. Oh, and special teams. Can’t forget about special teams.

But for one Vikings reporter out of the StarTribune, Jim Souhan, there was no problem taking Bradford to task after he lost his first game of the season.

Bradford’s blockers will receive most of the blame for Bradford’s first poor game in purple, and they should. But Bradford did little to help.

He missed open receivers and showed poor pocket awareness. He looked spooked even when there were no ghosts. From the second half of the victory in Carolina up until kickoff on Sunday, Bradford had managed pressure well, beating blitzes with quick passes and decisions.

Bradford was sacked six times. According to Pro Football Focus, Bradford’s passer rating under pressure entering the game was 108; in this one it was 16.4.

“I’ve got to figure out a way to get it out quicker,” Bradford said. “We’ve got to do a better job with staying on guys [blocking]. I think there are a lot of answers to that problem.”

Neither Bradford nor his teammates were willing to say he was nervous, but he played like he was. Lincoln Financial Field is loud and the crowd is often abusive. Bradford not only failed to win big in Philadelphia, he requested a trade when the Eagles drafted North Dakota State product Carson Wentz.

This had to be the last place he wanted to play a football game this season, and it showed.

Bradford said after the game he doesn’t harbor any bitter feelings towards Philly – and, honestly, he shouldn’t – but Souhan had no problems going in on the Vikings’ quarterback, one of the reasons they’re currently in first place in the NFC North, when he had a bad game against a defense who 100% knew his biggest weaknesses.

All I can do is sit back and laugh. I never bought in to Bradford. It’ll be fun to see Vikings fans and reporters try to sell their stock in him now, whether it’s fair or not.