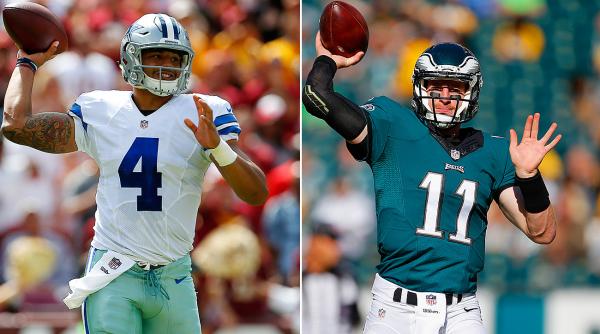 When the season started, some people predicted the Philadelphia Eagles could win the NFC East because of how bad they thought the Dallas Cowboys, Washington Redskins and New York Giants would be. Nobody really blamed them. Nobody thought the Eagles would look as good as they did through the first three games of the season before they hit their amazingly too soon bye week, but nobody thought that altogether, the division would boast an overall record of 17-9. The Eagles could actually be boosting an undefeated 6-0 record after letting a win slip away in Detroit and, despite being manhandled by the Redskins virtually all game last weekend, were still in position to have a chance at winning.

The NFC East is the only division in the NFL in which every team is currently over .500. Simply put, they’re the best division, by far, in the National Football League. And on Sunday Night Football this coming weekend, the Eagles and Cowboys will be vying for first place during their Week 8 clash in Arlington.

The Cowboys were thought to be done competing for a division title after Tony Romo went down with a broken bone in his back during the preseason, but Dak Prescott, along with Ezekiel Elliott, and a pretty good defense, have propelled the Cowboys to an impressive 5-1 record. Sure, they’ve faced the same teams the Eagles have, minus the Steelers and Vikings, but their win last weekend at Lambeau Field was still impressive. Maybe they’re not the same Green Bay Packers that have dominated the NFC North in recent years, but the Cowboys still went up there and punched them in the mouth and got a victory.

And, yes, the Eagles’ victories over the Steelers and Vikings were very impressive, as well. Despite how inept the offense looked against Washington – and that could absolutely be attributed to the first start for rookie Halapoulivaati Vaitai – Carson Wentz looked better under pressure against the Vikings yesterday, a team that boasts a better defense than Washington. Maybe he’s learning the ropes quickly; Wentz impressed despite having a multitude of high throws and bobbled snaps during the game. He’s not going to be stellar every single game, but if that’s the best defense Wentz will see all season – and yes, we still have nine more weeks to go – then that’s pretty exciting.

Prescott also deserves praise, but he also has a very good team around him compared to Wentz. Cowboys head coach Jason Garrett has limited the opportunity for Prescott to make mistakes, and that’s only going to help him as a rookie. Elliott is the best rusher in the league right now – much of it can be attributed to the offensive line – but he’s also a hard runner and makes people miss. The Eagles’ defense better have an encore performance Sunday night.

So, the stage is set. A Week 8 tilt to determine who will be in first place between the Eagles and Cowboys. It’s exciting. It might not be what the last week of the regular season will look like, but now that we’ve seen how the team’s responded to back-to-back ugly road losses, maybe it’s time for their second road win of the season. Maybe they’ll come to play in prime time like they did in Chicago in Week 2. Maybe they’ll get blown out and quickly forget about the game and focus on heading to the Meadowlands on November 6.

But one thing’s for sure: this week is gonna be lit.