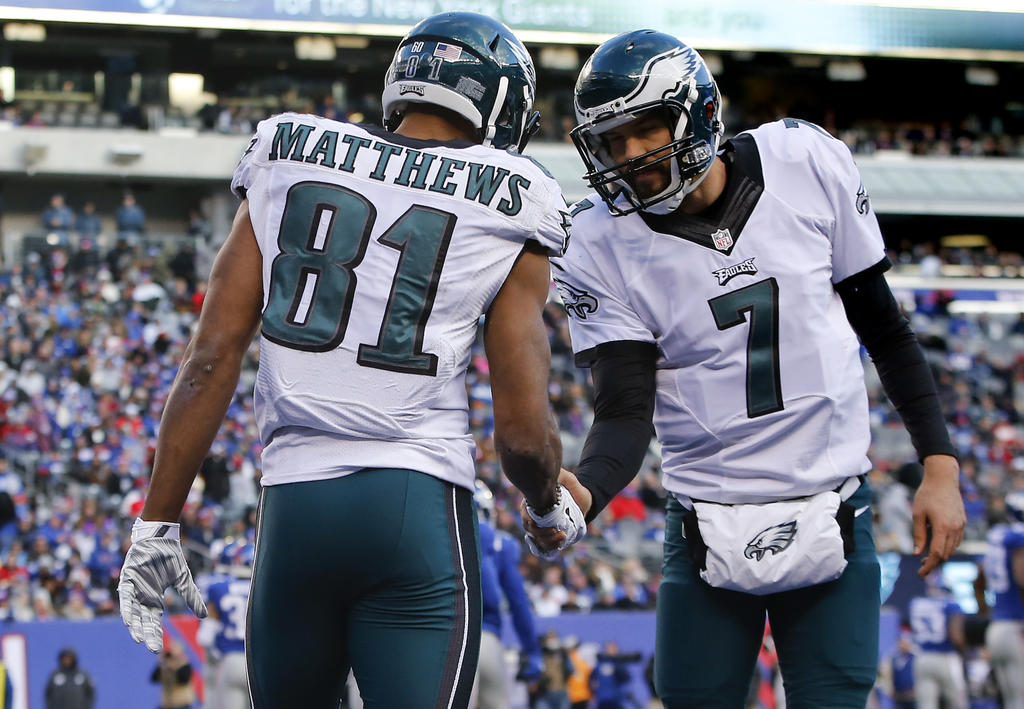 It’ll be a hostile environment Sunday at Lincoln Financial Field when Sleevie Wonder makes his return to Philadelphia for the first time since being traded to the Minnesota Vikings right before the start of the season.

“It is a little strange. If you would have told me six weeks ago that we were getting ready to play this game, I would have thought that I’d be playing for the Eagles getting prepared to play the Vikings. The fact that it’s the other way around and I’m playing against the Eagles; it’s definitely not something that I expected.”

The Eagles received a first and a fourth-round pick in exchange for Bradford. That fourth can also turn into a third if the Vikings reach the NFC Championship Game and a second if they win the Super Bowl.

The Linc is going to be lit!

Carson Wentz had an up-and-down performance last week during the Eagles’ 27-20 loss to the Redskins. While he had his moments, the 54-yard bomb to Jordan Matthews, the movement in the pocket and finding open receivers, he also took too long to get the ball out at the end and was sacked twice. He also had his fair share of overthrows in the early stages of the game. It’s not going to get easier having to face a defense which leads the NFL in passer rating allowed.

Here’s some of the good.

Matthews straight down the seam and Wentz with a DIME!!! pic.twitter.com/qGWL9azhWL

Wentz sidesteps Baker, steps up in the pocket and fires a strike to Agholor. Wow! pic.twitter.com/v3C3kiG9yQ

Wentz with back to back seeds to DGB and Ertz pic.twitter.com/lLOppnF6fC

And some of the bad.

5th sack of Wentz, who has to get rid of the ball pic.twitter.com/PogvHLJKD1

Speaking of bad, can it get any worse than Halapoulivaati Vaitai’s struggles last week? Some of the overthrows from Wentz were due to his play. Eagles head coach Doug Pederson stated during the week that he did what he could to help Big V out, but that really wasn’t the case. Vaitai saw one double team and nearly not enough chips, although to his credit, he did play better in the second half.

As bad as Big V was today, a lot of it’s on Doug too because you have to help him out with a lot more chips and double teams. pic.twitter.com/JiwFpHPBsu

Vaitai won’t have to go up against a Pro-Bowler in Ryan Kerrigan this week, but Brian Robison and Danielle Hunter are no slouches. And if you don’t know who Hunter is, he’s basically Minnesota’s version of Vinny Curry. He’s adept at getting after the quarterback and will line up on both sides.

Danielle Hunter with one of the more impressive plays by a DE I’ve seen pic.twitter.com/Op1ijcKjc7

It’s been back-to-back, double-digit sacks over the last two years for the underrated Everson Griffen at the other defensive end spot and he’s on pace to make it three in a row. He has four sacks so far. He pushes tackles back with ease using his great power, but also has the athleticism and agility to change direction. Griffen is also relentless in his pursuit of the quarterback. He uses that speed and strength effectively as well against the run, pushing linemen back and making plays down the line.

The Vikings have gotten to the quarterback 19 times and lead the NFL with a plus-11 turnover differential. If Pederson is naive about making adjustments, it’ll be another long day for Big V and Wentz, who will again be under constant duress.

We haven’t even gotten to Minnesota’s secondary yet, which is led by cornerback Xavier Rhodes and safety Harrison Smith.

At 6’2, 214 Smith is a great, physical in the box type of safety but can drop in coverage as well. Against the run, Smith is one of the best in the business from the safety spot. He comes off blocks and lays the wood in the open field. In coverage, he plays with great instincts and intelligence as a center field safety. He reads and jumps routes well. He also takes the proper angles and attacks the ball when bringing receivers down.

Rhodes’ hand usage and ability to press at the line of scrimmage is his biggest strength. So when you mix that with his length and speed, Rhodes locks receivers down. He’s got fluid hips and shadows opposing receivers very well. The Vikings have a lot of depth behind Rhodes too. There’s the 37-year-old Terence Newman, last year’s first-rounder Trae Waynes, Captain Munnerlyn and rookie Mackensie Alexander.

Even with Pederson’s utilization of the tight ends and running backs, Anthony Barr is quickly becoming one of the top defensive players in the league and Minnesota seems to have the right Kendricks brother in Eric. And if Pederson is going to keep his tight ends in to block more, that is obviously going to limit their production.

One of the ways Pederson attempted to help Big V out was by not running the ball to his side. He did it only four times against Washington and the problem with running predominantly to the left and up the middle is it makes the playcalling more predictable.

The Eagles ran the ball 21 times for 94 yards against Washington’s lowest ranked run defense coming into last Sunday’s showdown, according to yards per carry. Wendell Smallwood saw more playing time like I hoped for, but gained just six yards on four carries. He did have that kick return for a touchdown, though.

Ryan Mathews led the way with 60 yards on nine totes.

The Vikings have one of the best run stuffing tandems in Linval Joseph and Sharrif Floyd, but the Eagles lucked out with Floyd’s meniscus injury. He’s already been ruled out for Sunday’s game. Joseph is very strong at the point of attack and has also shown the ability to get into the backfield and pressure the quarterback.

Bradford, entering the season 100 percent healthy for the first time in years, is having the best start of his career so far, posting a 109.8 quarterback rating to go with six touchdowns and no interceptions. He’s completing 70.4 percent of his passes.

After missing a pair of seasons following back-to-back ACL tears, Bradford struggled over the first half of the season last year before settling into a rhythm over the second half. He tossed 10 of his 19 touchdowns over his last seven games, but it was improved accuracy and better decision making which led to his interception total going down. He threw 10 picks over his first seven contests, but just four the rest of the way.

Bradford has a quick release and puts the ball on the proper shoulder on most passes less than 10 yards.

Stefon Diggs has be Bradford’s favorite target so far. The second-year Maryland product has caught 33 passes for 372 yards and a touchdown. He’s a polished route runner to go with a soft set of hands.

The Eagles have to take advantage of the pair of lackluster tackles the Vikings possess, T.J. Clemmings and Jeremiah Sirles. Clemmings is currently graded dead last (78th) out of all the qualified tackles, according to Pro Football Focus.

Brandon Graham, Vinny Curry and Connor Barwin were unable to generate any pressure going against one of the top pair of tackles in the game last week, Trent Williams and Morgan Moses, and because of that the cornerbacks were exposed. You’d think the Eagle should be able to get to Bradford some this week.

The return of Leodis McKelvin is key because Jalen Mills has struggled as a starter on the outside and was picked on by DeSean Jackson last week. Nolan Carroll hasn’t been much better, but the tandem of McKelvin and Carroll is more serviceable than that of Carroll and Mills.

The run defense finally got exposed last week after the Redskins shredded the Birds for 230 yards on the ground. I noticed some problems early on in the season, but it was overshadowed because the Eagles were playing with a big lead most of the time and teams stopped running the ball. A lack of gap control in the Wide 9 scheme led to gaping holes for Matt Jones and Rob Kelley to run through throughout the afternoon.

Adrian Peterson remains out with a meniscus tear and his replacements, Jerick McKinnon and Matt Asiata, are struggling to gain traction running behind the shoddy offensive line. The Vikings are dead last in yards per carry with a measly 2.5 yards per attempt.

You’d think the Eagles should be able to contain them, but I thought that last week too.

PREDICTION- A lot of people aren’t giving the Eagles a shot in this game, I heard that in Week 3 prior to playing the Pittsburgh Steelers too. I’m curious to see how the Vikings come out and play following the bye. This was something that seemed to halt the Eagles’ momentum.

I believe Philly will stop Minnesota’s offense, it matches up very well against the Vikes. The Eagles don’t have to face an elite offensive line this week, in fact it’s one of the worst. I think they’ll pressure Bradford consistently and that’ll help cover the deficiencies in the secondary.

But how are the Eagles going to move the ball, that’s the question. The first team to 20 wins and I’m taking the Birds in an upset at home. They play with a lot more fire and passion at home.