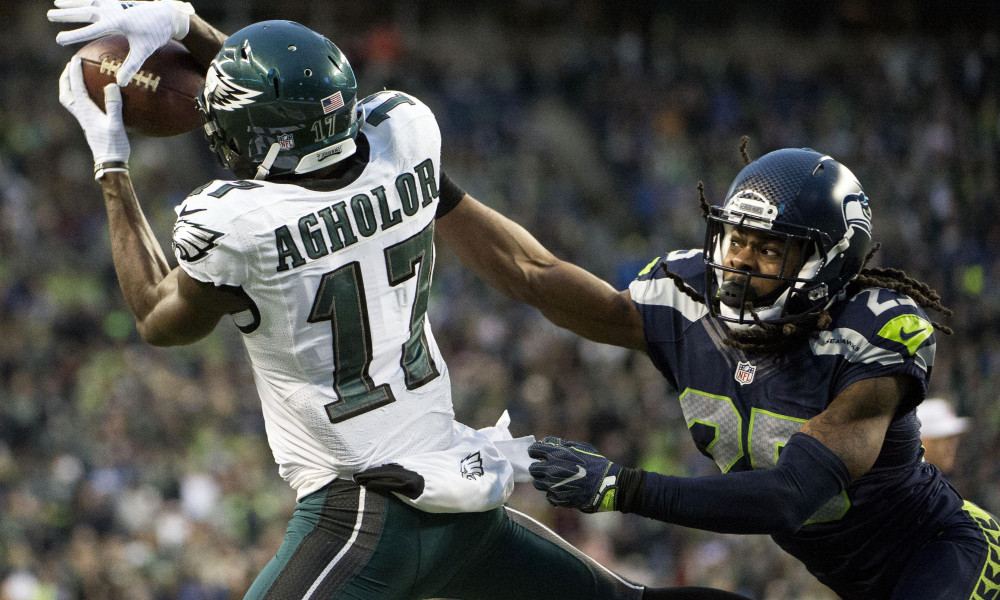 The Philadelphia Eagles wide receivers need to stay in Seattle for the next week, head into the fish market and work on their hands from dusk until dawn.

He can’t even line up correctly, either.

Maybe Russell Wilson can give him some pointers.

At least he caught this meaningless two-point conversion.

Wilson was 18-of-31 for 272 yards and a touchdown and the Seattle Seahawks beat the Eagles 26-15 at CenturyLink Field on Sunday afternoon.

“I have to get out my own head. I’m pressing so much and I’m worried about so many things, I have to go out there and catch the ball (with my body) instead of with my hands,” Agholor said. “Because I’m thinking too much. And I’m so worried. It’s such a selfish thing that I need to stop.”

Eagles head coach Doug Pederson insisted during his press conference that he doesn’t plan on giving up on Agholor.

Let’s not put all the blame on Agholor, however, although that penalty and subsequent drop was demoralizing and the Eagles weren’t able to pick themselves up after that. Carson Wentz looked like a rookie and the defense struggled mightily. They were outgained 439-308 and it was a lot worse than that. Philadelphia picked up 100 yards on its final two possessions in garbage time.

Going up against a woeful offensive line, the Eagles generated just one sack, once again not being able to harass the quarterback on the road. This was the key if they wanted to win the game. They came in averaging 3.8 sacks per game at home compared to just 2.0 on the road. And when the Birds can’t get heat on the signal-caller, the Eagles’ cornerbacks get exposed.

The two clips below are some deep play-action drops where Wilson had all day to throw.

Seahawks picked on Mills twice off deep play-action and Eagles didn’t generate any pressure, but they stiffen inside the 5 and force a FG pic.twitter.com/2ZojB5vM1m

Wilson also appears to nearly be all the way back from that knee injury earlier in the year. He did a great job of maneuvering and stepping up in the pocket and scrambling out of it.

Graham’s offsides penalty comes back to bite the Eagles in the ass @AdrianFedkiw pic.twitter.com/hdRveLp72J

The Eagles’ run defense wasn’t much better. The Seahawks came into the game averaging 77.7 rushing yards per game, which was 30th in the NFL. They ran for 152 yards in this one.

Prosise with the 72-yard touchdown, not sure what Jalen Mills is doing @AdrianFedkiw pic.twitter.com/Px279UevER

Jalen Mills shouldn’t be allowed to wag his finger anymore after that effort.

Wentz was 23-of-45 for 218 yards with two touchdowns and two interceptions. Fazed by the stout Seattle defense, Wentz’s ball placement was the worst I’ve seen it all season. He had his fair share of overthrows, but also tossed a bunch of low ones too.

“I thought overall it’s going to be a great learning experience for him, coming in here, a tough place, and trying to get a win,” Pederson said of Wentz. “I thought he played OK.”

Pederson is being a little bit too nice.

Ryan Mathews, Darren Sproles and Halapoulivaati Vaitai exited the game with injuries and did not return, while Fletcher Cox, Jason Peters and Connor Barwin also departed before coming back.

WIP’s Howard Eskin reported that Mathews and Sproles’ injuries might be serious.

The Philadelphia Inquirer’s Jeff McLane is saying that Mathews walked out of the locker room with a brace on his right knee and limping.

#Eagles RB Ryan Mathews walked out of the locker room with a brace on his right knee. Limping. Didn't say much.

Sick of all the negativity? Ok fine, let’s switch it up.

Believe it or not, there was actually some positives you could take away from this game in terms of Pederson’s philosophy on offense. While everybody in Philadelphia wants to see Bryce Treggs get more snaps and Paul Turner be brought up from the practice squad, I believe that the Eagles can mask some of the deficiencies they have at wide receiver by getting their tight ends involved a lot more. We saw more of the 2-to-3 tight end sets and Trey Burton was lined out wide as a receiver on several snaps.

Check out this play near the goal line with all three tight ends lined out wide to the left and the result was a touchdown.

Eagles with Ertz, Burton and Celek out wide to left and I love it. TEs have caught 4 of Wentz’s 6 completions, including this TD from Ertz pic.twitter.com/9z22l5x8z0

Seattle has some of the best coverage linebackers in the league in Bobby Wagner and K.J. Wright and the best safety duo in Earl Thomas and Kam Chancellor, so this was a very tough matchup for them, but I’m encouraged moving forward. The tight ends and running backs posted 18 of the 25 Carson Wentz completions last Sunday against the Atlanta Falcons and had 13 of the 23 Wentz completions in this one. And that includes all the garbage-time receptions Dorial Green-Beckham had late in the game.

The offensive line was run blocking pretty well before having to throw the ball a ton when they fell behind. The Eagles averaged 4.35 yards per carry against a defense that had surrendered 3.5 yards per tote coming in, the third best mark in the league. Philadelphia totaled 113 yards on 26 carries in all. Jason Kelce had another solid outing in run blocking and the Eagles in general have toted the rock very well off the left side of their line the last two weeks.

Kelce and Barbre spring Mathews free for 18 yards along the left side @AdrianFedkiw pic.twitter.com/INiltZPZD2

At 5-5, the Eagles can only afford one more loss to potentially make the postseason. And even that might be iffy the way the NFC is playing itself out.

At least four of their last six games are at home where they are unbeaten. It starts against the Green Bay Packers next Monday night.