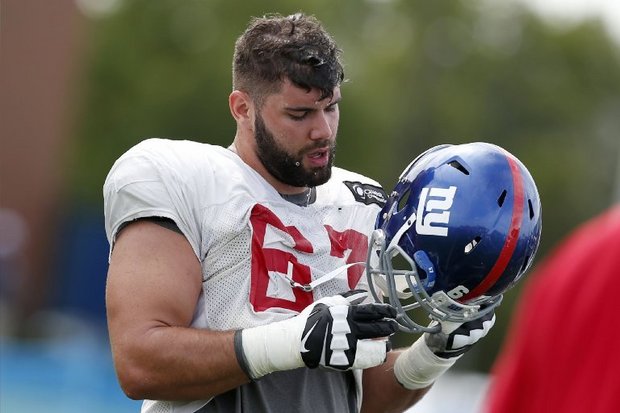 Apparently, Justin Pugh doesn’t get how professional sports work. Or, at the very least, how they work in Philadelphia.

Pugh should know that, though, because the guy grew up in Holland, PA and went to Council Rock High School. But, Pugh was drafted by the Giants in 2013, so that means he’s pro-Giants, which is 100% normal. And ahead of his team’s tilt against the Eagles on Sunday, a team they’ve only beaten four out of the last 13 games since 2008, Pugh took aim at Philly and the fans for their disdain for him, you know, playing for the enemy.

“I just don’t like Philly, to be honest. I’m from there, and every time I go back there I don’t get treated right, from my hometown. So it’d be nice to go get this one, and be able to show my face in my hometown when I go back to my (youth) camp this year.”

“I’ll be sitting there with my mom eating dinner, and they’ll be doing ‘Eagles’ chants. Or I’ll go to the bathroom and they’ll say, ‘Go Eagles.’ Down at my shore house, it’s like South Jersey, so it’s all Philly people. … No matter where I go when I’m down there, it’s always like that.”

Pugh was just getting warmed up.

“I was that kid. I can say that, because I was that 18-year-old kid that thought he was the big, bad tough, ‘I’ll come wherever and wear my Philly jersey,”” Pugh said. “Now, I don’t like that kid that I was. Now, that kid’s booing me when I come home.”

Harmless enough to turn the Pughster against his quasi-hometown. It’s probably not just 18-year-old kids. I’m sure it’s fully grown adults who are married and with kids of their own. But that’s what happens in professional sports. There’s a difference between chanting “E-A-G-L-E-S EAGLES!” and spitting in your dinner. Chants are harmless, especially if they last for one, maybe two chants. And it shows how hilariously out of touch Pugh is invoking Santa Claus and snowballs and saying the fans like living up to that reputation. He couldn’t be further from the truth, and clearly hasn’t been to an Islanders game. [Nobody else has, either.]

Philly fans have changed through the years and certainly aren’t as brazen as they were back in the 1980s and 90s. But there’s still something to be said for getting into the heads of the opposing players. And if that means yelling “Go Eagles!” to you during a night out with mom, then so be it. Is that really going to ruin your night?

It sounds like Pugh was never into the Philly scene, especially when he was drafted by the Giants.

Pugh eased out of the Philly area, going to Syracuse after starring at Council Rock South High. When the Giants selected Pugh in the first round of the 2013 NFL Draft, then-head coach Tom Coughlin brought up his Pennsylvania roots.

“The first thing I said to coach Coughlin on the phone was, ‘I’m burning [my Eagles stuff] tomorrow,'” Pugh recalled.

“My direct family, no,” Pugh said. “But my best friend’s got an Eagles tattoo on his chest, so there’s no really converting that guy. … I got them tickets one time, and that’s the last time I’m ever getting them tickets. They ask me for field passes, tickets.”

Glad you didn’t get that tattoo?

“I would have never gotten that tattoo,” Pugh said. “I told him that was the dumbest thing he’s ever gotten. … It’s crazy that he got that.”

All kidding aside – and he was kidding, to a point – Pugh is very happy where he is. He’s thrown out the first pitch at a Yankees game, he’s a frequent spectator at Knicks and Rangers games, he has friends on all the other area teams and he has his “family” with the Giants. When he hosts his annual summer camp, he always hammers home that message.

“I tell them that if you get drafted by a New York team or a Washington team or a Dallas team, you’re going to go play for that team,” Pugh said. “And thank God I got drafted here. This is the best organization. I’m family now. I’m part of New York City, and I love it up here.”

The Giants the best organization in the world? The same organization that showed unbridled loyalty to Josh Brown? Sure, Justin. Sure.

As for Pugh, let’s hope he enjoys another loss on Sunday.