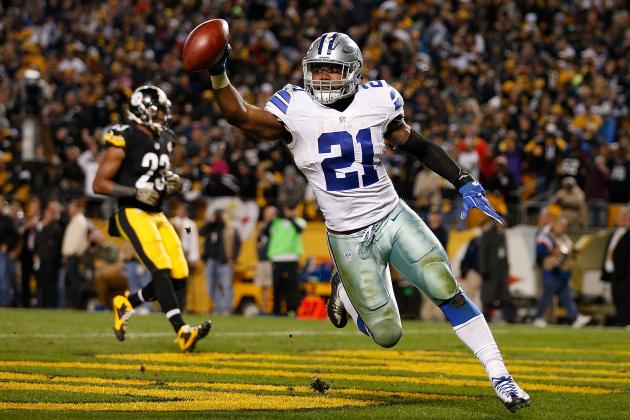 While we all sit around ready to give thanks for the many blessings we have and feast on a spectacular meal, the traditional games of pigskin will have the eyes of many a house. No matter how much some try to block it out, football is synonymous with Thanksgiving. The memories run endless and give us the gift of remembrance throughout the years. Here’s to hoping your Thanksgiving Day is a great one! Now… football!

During a short week I decided to combine the weekly fallout and add a little twist of just focusing on the Thanksgiving Day games since they hold so much value. I will include a Part II for the Sunday games at the end of the week.

As always, I look forward to your opinions and feedback. I appreciate your following and hope your Thanksgiving is everything you hoped it would be. You can tweet me with any questions (@TCutillo23) and leave your comments below.

Rob Kelley – Rob Kelley was a name everyone, including myself, had on their list as a guy who could make some noise this season. Coming into the season, Matt Jones didn’t blow anyone away and Kelley was the best back in the preseason. Now that Jones has fallen out of favor after injury, it’s Kelley’s turn to shine. Over the last two weeks, he’s shown he has it all to be a top back in this league and on your roster. Congrats to those who picked him up!

Pierre Garçon – Welcome back, Pierre! As the season goes on, Garçon continues to rack up targets and now is finding the end zone. As more teams focus in on DeSean Jackson and Jordan Reed, Garçon will be the beneficiary. He will serve just fine as a WR3 with WR2 potential for the rest of the year.

Steve Smith, Jr. – How can you not cheer for Steve Smith? Smith has been catching balls in the NFL for a long time and Sunday he became the 14th player, and first under 6′ tall to surpass the 1,000 catch plateau. Smith is in his 16th NFL season, with five Pro Bowls, three All-Pro designations and still is catching balls with ease.

Odell Beckham Jr. – I have to say that I have been extremely underwhelmed with the lack of excitement from OBJ. I also have to admit I was dead wrong with my analysis earlier in the year. Around Week 3, one of my avid followers asked me if they should accept a trade of OBJ for Melvin Gordon. At that time Gordon was scoring touchdowns, but stuck at a paltry 2.8 YPC and no sign of dominance. Going off past performance, I told him to keep OBJ as he will come around and Gordon will eventually fall off from lack of yards. Boy, was I wrong. It just goes to show you can do as much analysis as you want, but you can never guarantee the outcome.

Kelvin Benjamin – Kelvin Benjamin is back this year, but without an offense. His Twitter bio should just say, “Welcome to the World of Average. I am Kelvin Benjamin and I guarantee to get you three catches for 50 yards every week.” This guys is a superior talent, but the Panthers aren’t fooling anyone on offense this year. Keep this guy stashed away until he wakes up. However, unless you are in a keeper league it may already be too late.

AJ Green has a bad hammy, Tyler Eifert still has no legs, Gio Bernard tore his ACL and Carrot Top has finally played down to his strengths. Sorry Bengal fans, it’s over … The Cleveland Browns lose again … Don’t look now, but Jay Gruden is showing he really can coach … Mike Wallace continues to show his trip to the Age Revitalization Cave over the summer was worth it … John Fox will now play with The Replacements for the rest of the season … Alex Smith and Andy Reid are the NFL version of a Charlie Brown special. Andy is the teacher who no one cares to understand and Smith is Charlie Brown himself. His play is just as boring as Charlie’s narration of each and every cartoon … Marcus Mariota and DeMarco Murray are human, but still manage to produce … The Eagles’ receivers have front row tickets to the High School Turkey Bowl this week in the hopes of learning how to catch … Adam Gase is showing his real genius while Bruce Arians continues to lose it … Bring on Week 12!

Obviously the Thanksgiving Day game symbolizes the city of Detroit and this year with a 6-4 record there is added value. The Vikings are coming off a much-needed win against Arizona and seem to be flying around again on defense. Matthew Stafford has the Lions balling on offense, but I think he will meet his match this week. Don Zimmer will be having his defense feast on the Lions as their meal and Sammie Sleeves will do just enough to squeak out a win in the Motor City.

How bout’ them Cowboys! The Cowboys are riding high, but so is the offense of Redskins. Even though the Packers secondary was depleted, dropping 42 points in the NFL is something to get excited about. We all know about Dak and Zeke, but on Thursday Jay Gruden will showcase his guys named Kirk, Jordan, Rob, and Jamison. I’m going upset here as Josh shuts down Dez and the Skins take the heart of the Cowboys!

Both of these teams in week 11 were far from impressive. The Steelers practically gave the Browns every opportunity to win and the Colts barely squeaked by the surging Titans. Something is off in Pittsburgh and now is the time for it to click. With Andrew Luck OUT due to concussion protocol, Scott Tolzien will draw the start and offer little help to the Indianapolis skilled position players. Frank Gore could be the star of TNF, but still not enough to hold off the Yellow and Black army who should bank on this opportunity to turn their offensive woes around.