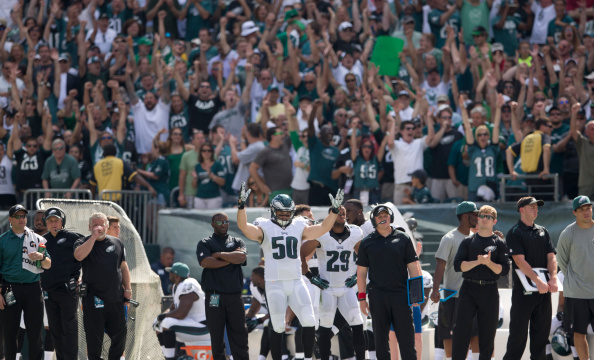 I’m going to my first Philadelphia Union game later this month. I’m not a fan of soccer, but respect the sport and those who say Union games at Talen Energy Stadium are a lot of fun.

While I’m skeptical about just how enjoyable watching a potentially scoreless match will be, I’ve never heard a bad thing about the Union game experience. That’s why when I saw the J.D. Power survey saying the Union provide the best fan experience in Philadelphia, I wasn’t surprised. It also wasn’t shocking the Eagles finished last based on their criteria.

The Eagles aren’t the worst fan experience in town. They’re by far the best.

Hockey is the top “in person” sport to watch. Phillies games are relaxing and a distraction from everything else going on during your day. Sixers games are fun and present the possibility of being a blast based on the success of “The Process.” Eagles games are big events that if you’re not attending, you’re watching, and if you’re not doing the trending activity of the moment.

Even if the Birds struggle, the energy of a NFL game is unmatched. That feeling and suspense rises a level with success. It goes up even further during prime time and a little bit more come the playoffs. Remember those days?

Now, the criteria for this survey included seating area and game experience, security and ushers, leaving the game, arriving at the game, food and beverage, ticket purchase and souvenirs and merchandise.

Based on the above, it makes sense why the Union won this survey. Talent Energy Stadium is a smaller venue with overall closer sight lines, it’s probably much easier to leave or enter than The Linc, Citizens Bank Park or Wells Fargo Center, not to mention I hear the ramp to the stadium parking lot in Chester is unbelievably convenient. Also, the prices for tickets are much more affordable than your average football, hockey or basketball ticket.

I’ve never been a fan of Lincoln Financial Field. The sections are too big, the access points to the stadium are limited and thus cluttered, parking is an expensive mess, getting to difference places throughout the upper and lower concourse are really difficult and it’s not enclosed like Veterans Stadium was, so the volume of the fans isn’t what it could be. They have since improved that feature by adding seats in the corners.

But, even if The Line doesn’t reach the loudness of the Vet, football still presents a different atmosphere than a 90-minute soccer game. Does this survey account for how loud the match gets, the popularity of the sport in Philadelphia or the abundance of people who wish to go to their games?

It doesn’t and I feel those factors are more impactful on the “fan experience” than the categories J.D. Power goes by. Just because something is easy doesn’t make it better. Citizens Bank Park is a much more enjoyable venue than The Linc. Sorry, Phillies, but going to Eagles games is a much better “fan experience.”

So, by no means am I criticizing the Union for making their product worthwhile for the people who attend. I’ll be one of them a couple of weekends from now. However, to say the Eagles provide the worst “fan experience” in Philadelphia is like claiming an affordable slice of pizza is more Philly than a traditional, authentic cheesesteak.

-Bravo to the new and improved Howie Roseman. In the past, the smallest quirk wouldn’t prevent me for calling the Eagles Executive Vice President of Football Operations out for being a non-football guy. Truth is, Roseman is now one of the best football guys. He listens, understands the cap, works well with people now and continues to fill needs on the Birds, most recently by trading the very popular Jordan Matthews and a third-round pick to the Bills for cornerback Ronald Darby. While the other general managers in Philadelphia patiently build, Roseman wants to compete now, which is refreshing to see. Even before Matthews’ sternum injury, it was a necessary move because of the wide receiver’s contract status and the Eagles weakness at corner. Now they’ll be more competitive defensively, while sending a message to Nelson Agholor to finally step up, no excuses. I can’t believe it, but whether the Eagles win a Super Bowl in Roseman’s tenure or not, they’ll always be in contention for playoff births and maybe even more. Roseman will be, many years down the line, one of the great Philadelphia sports stories.

-Pre-season football is such a tease. Every year the anticipation builds to finally see a game again, but the starters only play a series or two, or not at all in the initial games. Pre-season contests are sloppy, boring and there is too many of them. Some will argue the pre-season is important to learn about the roster bubbles and fully evaluate them. I find it hard to believe coaches and executives don’t already have an idea of who most of their 53 will be, and can use practice and a couple pre-season contests to figure that out. Why doesn’t the NFL recognize two is better than four? Quality is better than quantity.

-Odubel Herrera is the most entertaining aspect of the Phillies. The enigmatic centerfielder is must watch television. He’s very talented with the ability to hit, run and field. Yet, there is a handful of moments every week that make you want to pull your hair out, if it already isn’t gone. Earlier in the season, I didn’t think Herrera was worth the trouble. I changed my mind. His ability to persevere from his most recent slump and become one of the most dangerous hitters in baseball over the past couple of months, amid a 17-game hitting streak, proves his worth. He needs to play smarter, especially on the base paths, but his talent and the price the Phils are getting him for are too good to just give away.