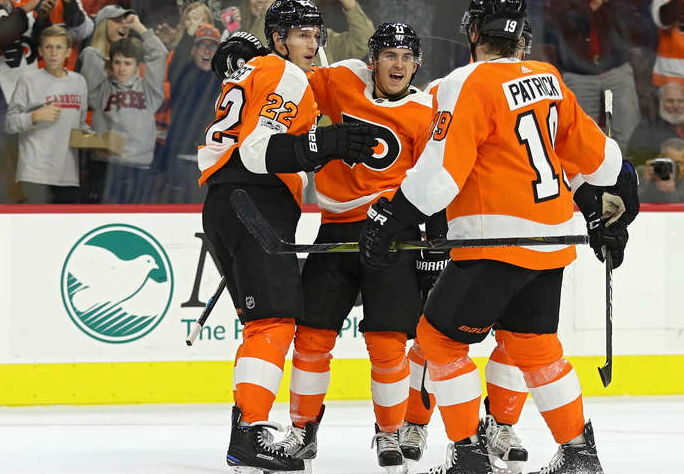 After the 8-2 drubbing the Philadelphia Flyers placed on the Washington Capitals on Saturday, they looked to continue their hot offensive play Tuesday night, and they did just that.

The Flyers opened up the week for only the second time on their home ice against Roberto Luongo and the Florida Panthers Tuesday night. It was the second game of a five-game homestand. Michal Neuvirth got the start over Brian Elliott for the Flyers in this contest.

The first period did not lead to any scoring from either team, but Neuvirth had a phenomenal frame, stopping all 15 shots he faced against an onslaught that would continue all night. The Flyers would also kill one penalty and go scoreless on two power plays.

But the second period was a doozy.

The Flyers would score four goals in the second stanza led by their new look first line of Claude Giroux, Sean Couturier and Jakub Voracek. Couturier scored an almost identical goal to his goal against the Capitals off of a feed from Voracek, which would become his fourth of the season. After that, Shayne Gostisbehere potted his first goal of the season with a short side snipe past Luongo.

Claude Giroux continued his hot streak, scoring his fourth of the year on a breakaway while on the power play. Nolan Patrick then helped to end the scoring in the second with a spectacular drop pass to Dale Weise after Travis Konecny was slashed on a breakaway leaving the puck in front of the net. Weise potted the easy goal but the drop pass and vision from Patrick is what stood out on the Flyers final goal of the second period.

Neuvirth kept a clean sheet up until 16:10 in the third period, and after a third consecutive Panthers power play, Jamie McGinn finally put one past Neuvirth to get Florida on the board.

That would be their only tally.

The Flyers scored an empty net goal with 1:37 left after a clean faceoff win by the Panthers that just happened to go right into the net. Even though he never touched it, Valtteri Filpulla got credit for the goal, his fourth of the season.

Neuvirth put on a show, stopping 40 of 41 shots for a save percentage of .976 for his first win of the season.

The Flyers climb to 4-2-0 on the season which put them in a tie for third in the Metro. They have a rematch with the Nashville Predators at home on Thursday where they will look to win three straight to start this homestand. And hopefully a little revenge for last week’s debacle.

On a more serious note, it looks like Wayne Simmonds and Gostisbehere may be dealing with minor injuries as both left the bench before the end of the game. That will be something to keep an eye on.