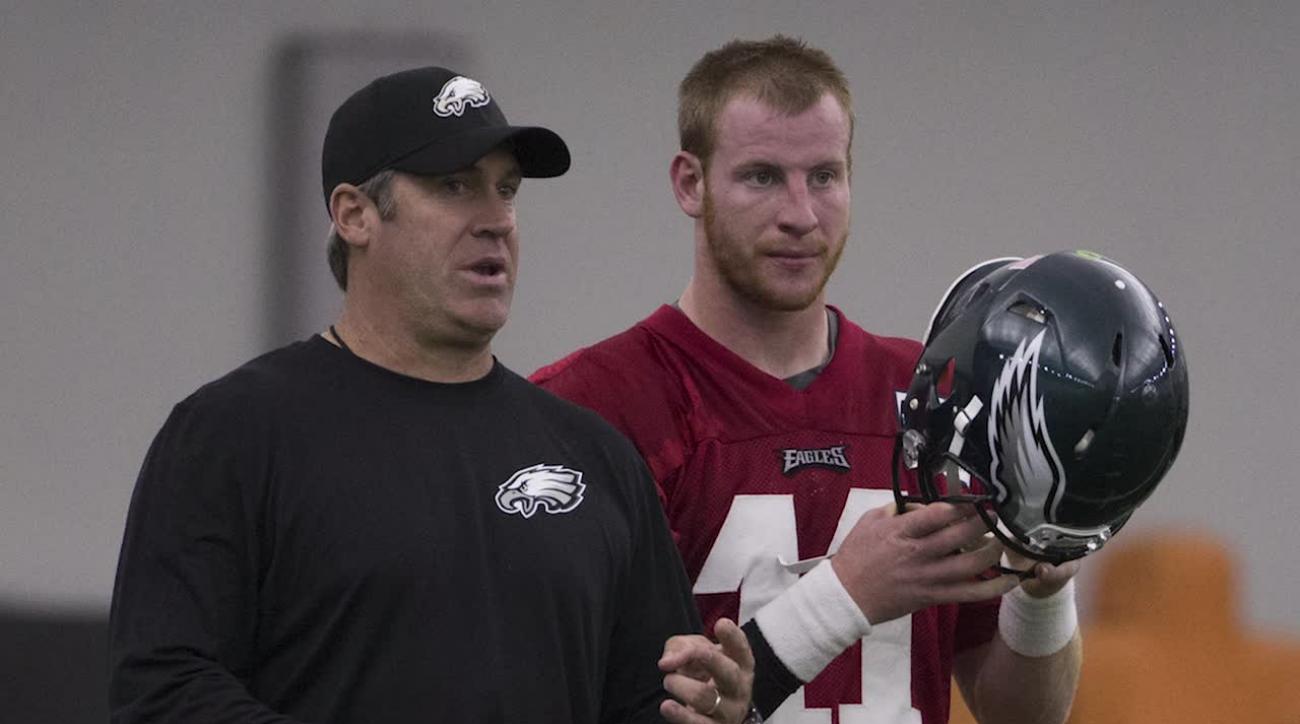 Did you enjoy your week?

Hard not to considering just about everything happening in the NFL seems to work the 5-1 Eagles favor.

A very unfortunate injury to Aaron Rodgers likely takes the Green Bay Packers out of serious contention in the NFC. A few NFC teams reminded us how average they are in Week 6, whether it be the Atlanta Falcons, Detroit Lions or Tampa Bay Buccaneers. The once daunting Kansas City Chiefs are losers of two in a row since the Birds took care of business in Carolina. And the only other 4-2 teams in the league are New England with their porous defense, Pittsburgh with their aging quarterback, Minnesota with their quarterback mess and the Los Angeles Rams, who still need to prove themselves … just like the Eagles do.

Lurking in the background quietly, in part because they’re all the way in the Pacific Northwest and believed to be on the decline since losing Super Bowl XLIX, are the 3-2 Seattle Seahawks. They’re always a formidable threat with their defense and stadium.

Basically, the NFL in 2017 is full of parity. Even since Kansas City needed to start doing a better job (hey Andy Reid), it’s hard to pluck one of these teams and say, “These guys stand above the rest.”

That includes your Eagles, a squad that continues to defy the adversity of injuries to key players and muddled through a difficult schedule with four out of six games on the road to start the season.

It’s hard to find a significant weakness on the Birds. They possess a young, growing franchise quarterback in Carson Wentz. Their run game is very good with veteran bulldozer LeGarrette Blount, and young complimentary players Wendell Smallwood, Cory Clement and Kenjon Barner. Their receiving game is immensely improved from 2016 thanks to the additions of Alshon Jeffery and Torrey Smith. They may not be lighting up the stat book, but they’re making it easier for Zach Ertz and Nelson Agholor to thrive. The offensive line is finding chemistry, the defensive line is better with the addition of Tim Jerningan, the linebackers (notably Mychal Kendricks) are tackling and thriving all over the field and the secondary is surprising serviceable, despite major concerns with the cornerback position.

Even though the Eagles are really good, Monday Night’s NFC East showdown will not be a cake walk for the Birds. The beaten up 3-2 Redskins aren’t anything special, but they’re an improved football team since Week 1 when the Eagles escaped Landover, Maryland with a season opening victory.

A 5-1 record can easily be exposed as the season goes on, especially after long breaks and more film for teams to study. When the ball kickoffs Monday night at Lincoln Financial Field, it will be 11 days since the Carolina win. It’s possible momentum ends, mojo stops and problems emerge.

You may be wondering why the Eagles need to continue to prove themselves as legitimate… the real deal, if you will?

The answer is, it’s not that they need to show their contenders, but a win over the Redskins to improve to 6-1 will separate them from the parity that is the NFL in 2017. They will be considered the most consistent team in the NFL after another victory on the national stage, and it will be the best start for them since 2004.

We all know what happened that season.

• The NFL Referees Association isn’t happy officials like Pete Morelli are taking criticism for being questionable at their job. I’m not saying officiating is easy, but when one team is charged 10 penalties compared to other being hit up for only one, which happens to amass just one yard, something is fishy. When Morrelli’s last four Eagles games features 40 penalties against the Birds and just eight for the opponents, something is odd. The online petition is brilliant. The NFLRA asserting “Claims like these demonstrate a fundamental lack of knowledge about NFL officiating,” and “These recent attempts to sensationalize statistics and create clickbait headlines lack important context” are offensive. Referees and umpires are never going to be perfect, which is why instant replay is such a major aspect of sports. But, to use such harsh language towards the people that make officiating relevant, the fans, is irresponsible and lazy. Don’t hold back on giving NFL referees grief during Eagles games. If their representation wants to release an asinine and insensitive statement, be as harsh as you possibly can on them.

• The NBA schedule makers did the 76ers no favors. Sixteen of their first 21 games are against playoff teams from a season ago. The Sixers put together a valiant effort in their 120-115 opening night loss to the Wizards. Sooner or later, though, they need to start winning these close games. I’ll consider the first two months (21 games) a success if the Sixers finish at least one game below .500.

• Is this what we can expect from the 2017-18 Flyers? After a .500 four game road trip to open the season, which included a game they gave away to Nashville, they came out with an offensive outburst of 13 goals in their first two home games. But after, Pekke Rinne and the pesky Predators shutout the Orange and Black to sweep the season series. It’s an up and down, mediocre slate of results we’re all too used to with this team as of recent memory. Is it harsh to start criticizing the Orange and Black seven games in, yes? Don’t consider it criticism, though. This is more of a minor red flag going off that it’s very possible this will be another middle of the road season for your Flyers.

• Goodness gracious the Major League Baseball playoffs are thrilling drama. Remember how fun that was when the Phillies were going this deep into the postseason. Just the other day was the anniversary of Jimmy Rollins’ walkout hit against the Dodgers in the 2009 NLCS. Red Octobers need to come back to Philadelphia as soon as possible. A fall without one is a void that never should happen. Following their loss to the Phils in ’09, the current National League Champion Dodgers went through only a three year stretch of no postseason and around .500 baseball. After that, five straight division titles, three trips to the league championship series and at least a World Series appearance. Their potential opponent in The Fall Classic, the New York Yankees, missed the postseason three times since winning it all in 2009, and never finished a season below .500. Those are legitimate major league franchises. The Phillies were one back in the golden days. Oh how long ago those good times seem.