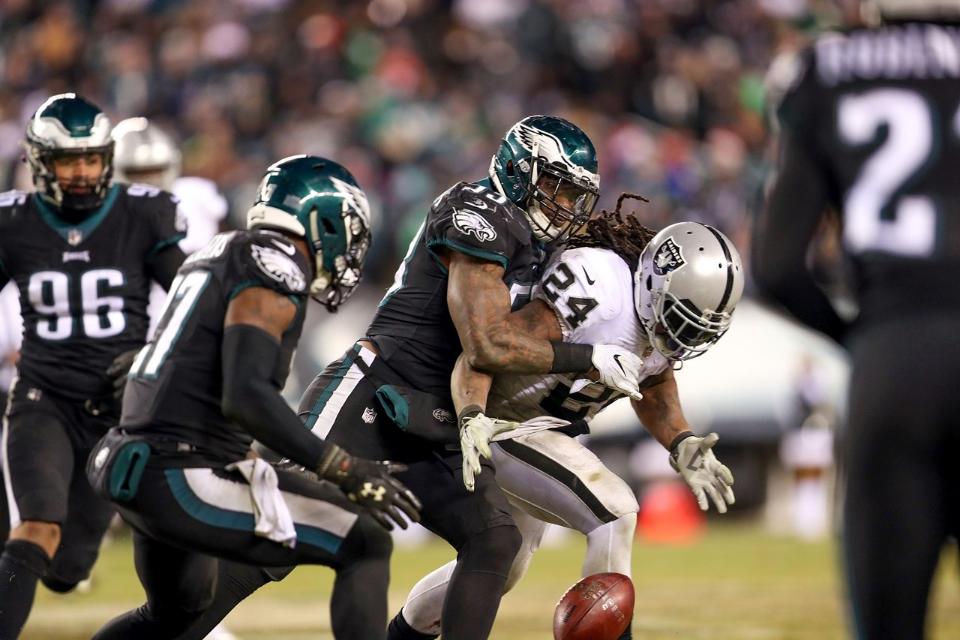 Merry Christmas Philadelphia, the Eagles have clinched home field throughout the NFC Playoffs!

The Oakland Raiders gift-wrapped Philly that one.

Jake Elliott nailed a go-ahead 48-yard field goal with 22 seconds left and Derek Barnett sealed a 19-10 victory when he scooped up a loose ball and scored on the game’s final play. It was an exhausting 60 minutes of football. The Eagles’ defense forced five turnvoers in the second half.

Nick Foles, who tossed four touchdowns last week against the New York Giants in his first start filling in for Carson Wentz, didn’t look as confident on Christmas night. He finished 19-of-38 for 163 yards with a touchdown and interception. Foles was pressured more in this game, overthrew his receivers, was slow to get through his progressions. It wasn’t inspiring. And as the game went on, the play-calling became more and more conservative.

Foles got away with one there. Stared down Ertz on the out route and Nelson cut in front but dropped the pick. pic.twitter.com/8rSv3hG1gP

At least Foles was honest about his play after the game.

I didn’t play good enough. Absolutely. I’ve got to play cleaner … It’s something that we have to clean up because we can’t go out there and do that and expect to win games.

Yes you do, but Foles wasn’t the only one. The wide receivers barely produced and Alshon Jeffery didn’t catch a ball.

There was un ugly stretch during the contest when Giorgio Tavecchio missed a 48-yard field goal, Foles threw a pick and Jalen Richard fumbled to give the ball right back to Philly shortly thereafter.

This game has become a complete slop show, both teams trying to gift wrap wins to each other. Tavecchio a missed 48-yard FG, Foles’ interception and Richard fumbles. Sheesh! pic.twitter.com/NTReCadsHN

There was also a point when Jay Ajayi and Marshawn Lynch fumbled on back-to-back carries.

This game was a mess!

Despite all of the offensive mishaps, I thought the defensive line stepped up. Chris Long and Vinny Curry were the unsung heroes. Defensive coordinator Jim Schwartz also used Brandon Graham as a defensive tackle in his third down rush packages more and brought the heat on Derek Carr consistently throughout the game. Patrick Robinson had a key interception due to the pressure from the line.

Schwartz brings the heat on 3rd down again, Graham in as a DT again and Robinson gets the pick! pic.twitter.com/pqF2ATcyIf

Zach Ertz posted nine receptions for 81 yards, but it felt like he could’ve had a lot more had Foles’ ball placement had been better. Jason Kelce had a monster game in run blocking, again showing why he was a Pro Bowl snub.

Jay Ajayi carried the ball 14 times for 52 yards. Philadelphia churned out 60 yards on 13 totes in the first half (4.6 yards per carry), but weren’t as successful over the final 30 minutes with 18 on eight rushes. Ajayi did collect a 17-yard score on a screen to finish off an 11-play, 58-yard trek early in the first quarter to give the Birds a 7-0 lead.

Feed Ajayi! Check out Kelce on some of these block on the Eagles’ 11-play, 58-yard drive. Ajayi takes a screen 17 yards to the house!! pic.twitter.com/h15OAz6Nvo

It was the ugliest Eagles win of the year.

We found a way to win, bottom line. I’d love to win 40-3, 34-28, but sometimes you’re going to be in these games. They did, but that won’t be good enough to win in the postseason. Doug knows that.

We’ll see if the Eagles can get things cleaned up by the time the Divisional Round rolls around.