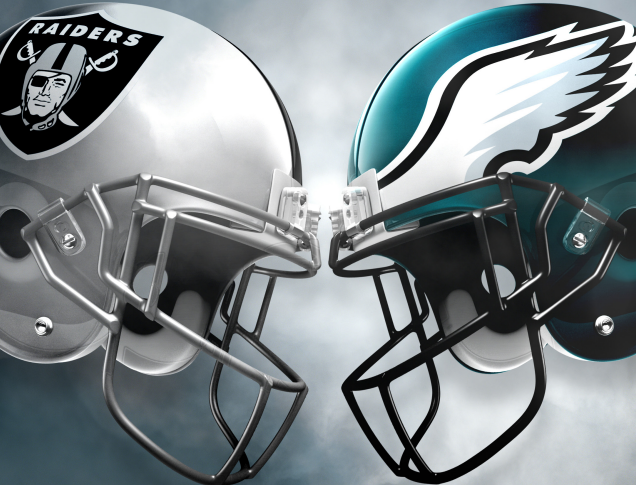 The Eagles have a chance to lock up home field advantage throughout the NFC playoffs when they take on the Oakland Raiders on Monday Night Football. This Eagles team plays at a completely different level at The Linc, and there will be another blackout on Monday night.

If last week was any indication of how the Eagles plan on executing against an inferior opponent, then the way to gauge this week’s matchup may be on the fritz. Oakland has had an abysmal year. However they still have weapons at their skill positions and a dynamic edge rusher. In a week where everyone was questioning the capabilities of Nick Foles, the offense and he were the only bright spots of the Meadowland trip. After a few weeks of so-so play I’ll say with no extreme confidence that the Eagles will probably win this week … maybe … I guess. My eggnog and whiskey prediction of the week is:

The Eagles are probably tired of hearing about their struggling defense. It’s all been a while since the Birds are home. national television game on Christmas night with home field probably not locked up… the Eagles are hungry for a blowout and will prey on the raiders

Eagles have a chance to secure home field advantage throughout the playoffs with a win against the Raiders on Sunday. After three games away from home, Nick Foles and the rest of the Eagles will be coming back to Lincoln Financial Field and will give the home fans something to cheer about. The Raiders have nothing to play for and Eagles have everything to play for, that will show in the game as the Eagles defense finally gets back on track.

Come December 26 it will be set in stone that the road to the Super Bowl will come through south Philadelphia.

The Eagles will dismantle the lifeless Raiders en route to the #1 seed in the NFC. Doug P’s offense will be too much for the Raiders to handle. Jay Ajayi will have his best game as an Eagle and Nick Foles will throw for at least two more touchdowns.

The Birds defense, coming off a flat out bad performance against the Giants, will bounce back and keep the Raiders in check. Derek Barnett will register another sack, I feel it.

For what it’s worth, the Birds are 3-1 in their all black uniforms under Doug Pederson. It will be 4-1 after this game. Birds cruise.

We have all heard the St. Nick clichés and the “In Nick We Trust” monologues, but the goal in front of us is much more stoic than a classic Christmas tune. The prognosticators had written us off and had us limping into the final few weeks without the guidance of our Holy Spirit. That was until they saw faith prevail as our new leader showed flashes of brilliance as he threw his blessings towards all the Eagle receivers.

And with that comes the contest on Christmas Day with the Grinches of Oakland who will try to steal away our precious gift. Unfortunately for them they aren’t stepping into Whoville where all is washed away and forgotten. They are traveling across the map to battle a team of destiny in a stadium full of happy gift seekers. The end result is simple.

If the Eagles can sustain Khalil Mack and give Nick Foles time to throw, he should be able to pick apart this woeful Oakland secondary. The Raiders have struggled at the cornerback position all season and have forced the fewest interceptions in the NFL. So with a clean pocket and weapons in Alshon Jeffery, Nelson Agholor and Zach Ertz he should be able to guide the Birds to a rather easy victory. We’ll see how the Eagles’ defense responds because the Raiders, like the Giants, use a quick passing attack. With the No. 1 seed in sight, I expect an inspired effort on defense.

The overall No. 1 seed is on the line, so no way do I see the Eagles losing this game. They haven’t played a home game in close to a month so The Linc will be rocking and I witnessed first hand at MetLife Stadium the difficulties a crazed Eagles crowd can bring. Give me the Birds in a rout.

The Eagles are on another level when they play at home, and this week will be no different. There’s not much to say about this one – Birds roll and they lock up home field through the NFC playoffs.