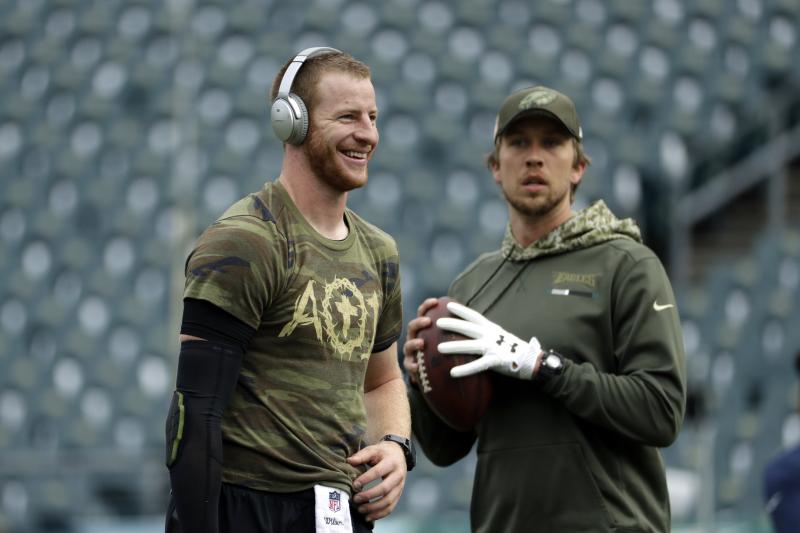 The nightmare became a reality on Monday afternoon, Carson Wentz has a torn ACL and his season is over.

Injuries are nothing new to the Philadelphia Eagles this season. They’ve been overcoming them since the start of the year, losing a plethora of stars like tackle Jason Peters, running back Darren Sproles and linebacker Jordan Hicks to name a few. Fletcher Cox has missed some games, Zach Ertz has missed some games, the hits just keep on coming and the hardest came Sunday when Wentz tore his ACL. Wentz has been mask all of those injuries by playing like an MVP, but will the team be able to disguise his now that he’s gone?

Eagles head coach Doug Pederson believes so. Take a listen to his message to the fans during his press conference on Monday.

Doug Pederson handled that Carson Wentz ACL news as well as you could've asked for yesterday. And I LOVED his message to the fans who believe the team's Super Bowl hopes are gone. Take a listen to this … pic.twitter.com/jqeir9wKAn

Motivational speaking at its finest! I thought Pederson handled the Wentz news as well as a head coach could’ve done.

Now it’s time to move on and figure out how this team can overcome this monumental loss and still contend for a Lombardi Trophy. The first thing the Eagles need to do is win two of their next three games and clinch homefield advantage throughout the NFC playoffs. Without that, the Eagles definitely have no shot. They start on the road to play the hapless New York Giants before coming home to play the Oakland Raiders and Dallas Cowboys to close out the season. There’s no reason why the Birds can’t win two of those, even without Wentz.

Get the homefield, anything can happen!

With Foles now at the controls, I expect the Eagles to become more of a ball-control offense that uses their running backs, offensive line and great defense to win games. It’s what the Jacksonville Jaguars and Minnesota Vikings have done all season long.

The Jaguars lead the NFL in rushing attempts (437) and are one of two teams (Buffalo Bills) to run the ball more this season than they’ve thrown it. They possess the highest run-pass ratio in the NFL and the seventh-leading ground gainer in Leonard Fournette. Minnesota on the other hand is fourth in rushing attempts and eighth in run-pass ratio. The Vikings lost Dalvin Cook to an ACL injury early in the season, but Latavius Murray and Jerick McKinnon have picked up the slack and are a huge reason why Case Keenum has flourished on third down, where the Vikings are second in the NFL (46 percent). Due to a revamped offensive line, the team added left tackle Riley Reiff in free agency and drafted center Pat Efflein, coupled with the running of Murray and McKinnon, Keenum is consistently put in favorable third-down situations.

So what does this have to do with the Eagles?

Philadelphia doesn’t necessarily have to change its strategy too much because it is second in the NFL in carries and seventh in run-pass ratio. It seems like a long time ago when Pederson refused to run the ball the first two weeks. Now it might be vital towards the Eagles’ success the rest of the way. Jay Ajayi has looked like the best Eagles back the last few games, I’d like Pederson to lean on him more. He had 15 carries Sunday, the most he’s had in an Eagles uniform. I think he should be toting the rock 20 times a game with LeGarrette Blount and Corey Clement still getting carries as well.

The offensive line has been a dominant run blocking line for most of the year, although the left side of it does need improvements. After a solid first couple games, Halapoulivaati Vaitai has struggled the past few outings going up against better competition. The Eagles are fourth in the NFL in yards per carry (4.6), which is a better mark than both the Jags (4.5) and Vikes (4.0). Keenum is third in the NFL in QBR (71.8), but he hasn’t been asked to do much with the Vikings. There’s a lot of routes in the flats and shallow crosses and his air yards (6.0) is the ninth fewest in the NFL. Compare that to Wentz (7.9), who is second in the league. When the Vikings do get aggressive, it’s off play-action and letting their talented wide receivers Adam Thielen and Stefon Diggs run post corner routes. Foles throws a pretty deep ball and if the Eagles stick with the run and opposing defenses start to creep eight men in the box, boom, that’s when you hit them with play-action on early downs and take shots down the field.

Pederson said during Monday’s press conference that he intends to maintain aggressiveness.

Pederson also discussed what needs to be done to cater the offense to Foles’ strengths.

“There’s not much we have to do. It’s more or less just what is he comfortable with? What is Nick familiar with? I’ve known him for a lot of years and we’re going to continue to have the same communication that Carson and I had during the weeks. Carson’s going to be a big part of helping Nick get ready too. So not much going forward is going to have to change.”

The drop-off from Wentz to Foles will be seen in the red zone, third down and ability to scramble. There was a point earlier in the season when the Eagles were so efficient in the red zone that they posted 18 touchdowns in 20 red zone trips, that’s insane! So let’s say the Eagles have five scoring drives in a game. Most likely, at least four of those would’ve ended in touchdowns and a total of 31 points. With Foles, I’m not expecting touchdowns every time in the red zone. So maybe the Eagles would put up two or three touchdowns instead. That’s either 23 or 27 points. Foles is also not going to convert as many third downs to extend drives, which is why I believe putting him in manageable third down situations is so critical.

But then again, Foles was able to convert this critical 3rd-and-8 late in the game against Los Angeles on Sunday.

If the Eagles want to realistically make a Super Bowl run, the defense will have to take it up another notch. And maybe even more than one. I loved how they responded following Wentz’s injury. After being shredded by Todd Gurley and Cooper Kupp for much of the afternoon, Chris Long forced a strip-sack and Philadelphia then caused a three-and-out on consecutive Rams series to seal the outcome.

I’ve heard a lot of Jeff Hostetler, Brad Johnson and Trent Dilfer scenarios the last few days, but the reality is the Eagles’ defense isn’t as dominant as the 1990 Giants, 2000 Ravens or 2002 Buccaneers. Honestly, they might not even be as great as the Jaguars or Vikings defenses.

Like the Eagles, Jacksonville also puts a lot of heat on opposing quarterbacks and leads the NFL in sacks (47) by a wide margin. The next closest is Pittsburgh with 41, while the Eagles are ninth with 35. Philadelphia, however, does boast the highest pressure rate in the NFL, according to Pro Football Focus. So how can the Eagles be ninth in sacks but lead the league in pressure rate? It’s because opposing offenses have been scheming around the ferocious defensive line and getting the ball out quick to negate the pressure and attack what was supposed to be a lackluster secondary. Ronald Darby just came back a few weeks ago, but the trio of Jalen Mills, Patrick Robinson and Rasul Douglas have all surpassed expectations. Jacksonville has arguably the league’s best cornerback duo in Jalen Ramsey and A.J. Bouye, so not only do the Jags get heat from their stellar front seven led by Calais Campbell, but they’re also piling up coverage sacks. The predictability of opposing offense’s short passing game has helped the Eagles’ cornerbacks and the defensive line has hid their deficiencies.

In order for the defense to take the next step, Ronald Darby has to play like a No. 1 shutdown cornerback and the rest of the secondary needs to step up so the Eagles can start racking up more coverage sacks. And boy is that a fine line because I can’t say enough about how well the cornerbacks have played! The team might also activate second-round rookie Sidney Jones for the postseason so that’s another potential x-factor to throw into the mix. He is practicing for the first time this week.

The Vikings have 32 sacks on the season and head coach Mike Zimmer has always been an advocate of bringing the blitz. In order to have confidence in calling them, you must have faith that your cornerbacks can cover wideouts one-on-one on an island. Xavier Rhodes is an elite No. 1 corner and Trae Waynes, Terence Newman and Mackensie Alexander aren’t slouches either. Schwartz has been calling more blitzes this season and part of the reason why has been the improved play of the cornerbacks.

In terms of run defense, Philadelphia is still No. 1 in yards allowed per game and ahead of both Minnesota (3.8) and Jacksonville in yards per carry allowed at 3.7. The Eagles have to ratchet things back up, though. They allowed Mike Davis to run for 64 yards on 16 carries against Seattle, while Gurley put up 96 yards on 13 totes.

As of right now the Eagles are No. 2 favorites to represent the NFC in the Super Bowl, while Minnesota is No. 1. Without Wentz, there are suddenly a lot of similarities between the Vikings and Eagles.

Maybe they meet up in the NFC Championship Game.

Maybe that game will be in Philly.

And maybe just maybe the Eagles can make it to the Super Bowl where anything can happen on any given Sunday.

We can dream, right!?