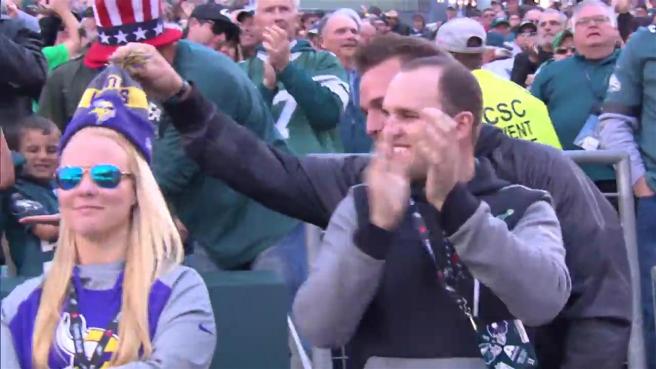 As someone who regularly gets lumped into the same group of people who threw snow balls at Santa in 1968, threw batteries, and most recently punched a horse in the face, I don’t want to throw all Vikings fans under the bus. I’m sure there are some good ones out there.

That’s as much of the high road as I’m willing to take.

While perusing Twitter on Eagles Victory Monday™ I came across a screen shot about an event that Vikings “fans” are planning titled “Toss stuff at Eagles fans on Super Bowl Sunday”. How petty can you be?

The official description for the event is as follows:

Vikings fans, i wanna show them the same hospitality they showed our fans and team in philly “skol” this isn’t meant to be an obnoxious event or rally this event is to bring our state together and fans and show them we love our team and stand behind it no matter what , we are going to be classy no fights or something stupid but feel free to dress too impress , and bring purple snowballs and glitter and paint bombs as well as mega phones we will be heard , and we will stand strong Super Bowl day ,revenge is the sweetest when it’s done smart and with Some class i want 2k plus mobbing the light rails and bars by the stadium any other ideas can go through me and the fellow moderators ( i wanna run this like a tailgate party , have diffrent groups at diffrent sides of the stadium and mega phones so they can hear our skol chant in the stadium

Next year is our year

For one, that is an illiterate mess. Second, don’t be mad because your team didn’t show up for the final 55 minutes of the NFC Championship game. Or be mad, I don’t care.

If you’re looking to get a good laugh, check out the posts on that event linked here if you want an even bigger laugh, there’s an event to throw walleye (a fish native to Minnesota) at Eagles fans when they get off the plane on February 2nd Facebook page here.

I like the enthusiasm here by the Vikings fans; I’m pretty sure there’s a subculture of Eagles fans who would do the same thing if they were in that situation. What they don’t know (which they should know) is that we feed off the hate. Their heartbreak, their desire to get revenge in a game that means nothing to them, their keyboard warrior attitude is beyond amusing.

Nobody likes us and we don’t care.