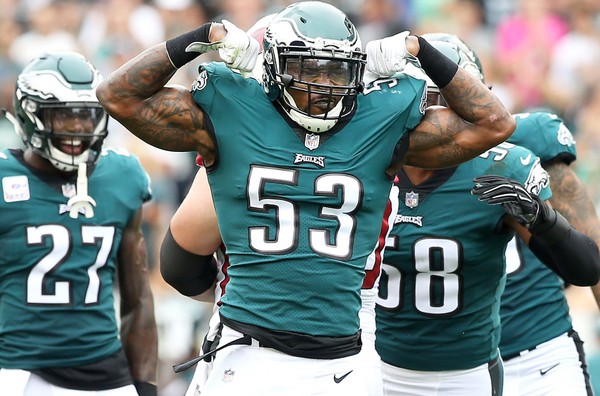 Re-signing Nigel Bradham is priority No. 1 for the Philadelphia Eagles this offseason, but with the least amount of cap space in the NFL, how can the Birds afford him?

Howie is going to have to Howie.

According to Over The Cap, the Eagles are the only team in the red at $9.27 million. Howie Roseman is going to have to make a lot of difficult decisions in the coming months, with the toughest being whether or not to trade Nick Foles. He has a cap hit of $7.6 million, but if you trade him they’d save $5.4 million in cap space, while eating $2.2 million of dead money. If they ship him out before 3/18, the day he is due a $3 million roster bonus, they’d get the full $7.6 million off the cap.

Sending Foles away is a sensitive subject at the moment for Eagles fans, but decisions are made with the head and not the heart in the NFL. If anyone can get get maximum value for Foles, it’s Roseman. The next question would be who begins the season as the backup in case Carson Wentz isn’t fully recovered in time? That would either be Nate Sudfeld or someone the Eagles will ink down the line.

But let’s say Wentz does miss the first four games, there’s no reason why the Birds still can’t win games. If Doug Pederson was able to work magic with Foles, he’ll do so with someone else the same way Andy Reid used to do with the likes of A.J. Feeley, Koy Detmer and Jeff Garcia. There’s a reason why Andy’s teams were still able to chalk up W’s in Donovan McNabb’s absence, it’s because of how complete the roster was. Philadelphia currently sports a top five defense, the best offensive line, weapons at receiver and a stable of running backs. The Eagles will find a way to eek out victories to start 2018 even if Wentz isn’t ready to go and Foles is dealt.

With that out of the way, let’s get into some other potential moves. Torrey Smith has a $5 million cap hit and he’s most likely going to be released. Even though he had a solid postseason, Mack Hollins seems ready to take over and be the No. 2 option next season. Another trade candidate is Vinny Curry, who carries an $11 million hit in 2018 and if the Eagles can find a potential suitor for his services, that would free up another $5 million.

If these moves are made and Foles is dealt before that roster bonus is due, the Birds will already be about $8-million plus in the positive. There are other ways to free up even more dough, like contract restructures. Brent Celek has a $5 million cap hit and is in the final year of his deal. The Eagles would save $4 million if he’s cut, but I envision a scenario where he takes a cap-friendly contract extension to play another year and help re-sign Bradham. The other name is Brandon Graham, who some reported would receive an extension during the season, but that never materialized. Graham is also heading into the final year of his pact and with $8 million due in 2018. I can see Roseman backloading a deal with Graham agreeing to it and helping alleviate some cap pressure.

Now that the Eagles are in a position to pay Bradham, how much is he going to get? Here’s some of the top 4-3 outside linebackers in the NFL and how much they’re earning. 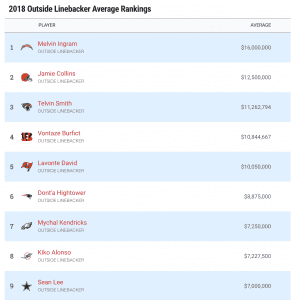 Bradham is one of the most underrated players on the roster and was the best linebacker on the team this past season. I predict that the 28-year-old will receive a 3-4 year extension in the ballpark of around $7-7.5 million a season. It’ll be interesting to see what his market is, but he’s always excelled in Jim Schwartz’s scheme and not really anybody else’s.

With the lack of depth at the position and uncertainty of Jordan Hicks’ status following his Achilles injury, the Eagles will find a way to bring Bradham back to Philly.