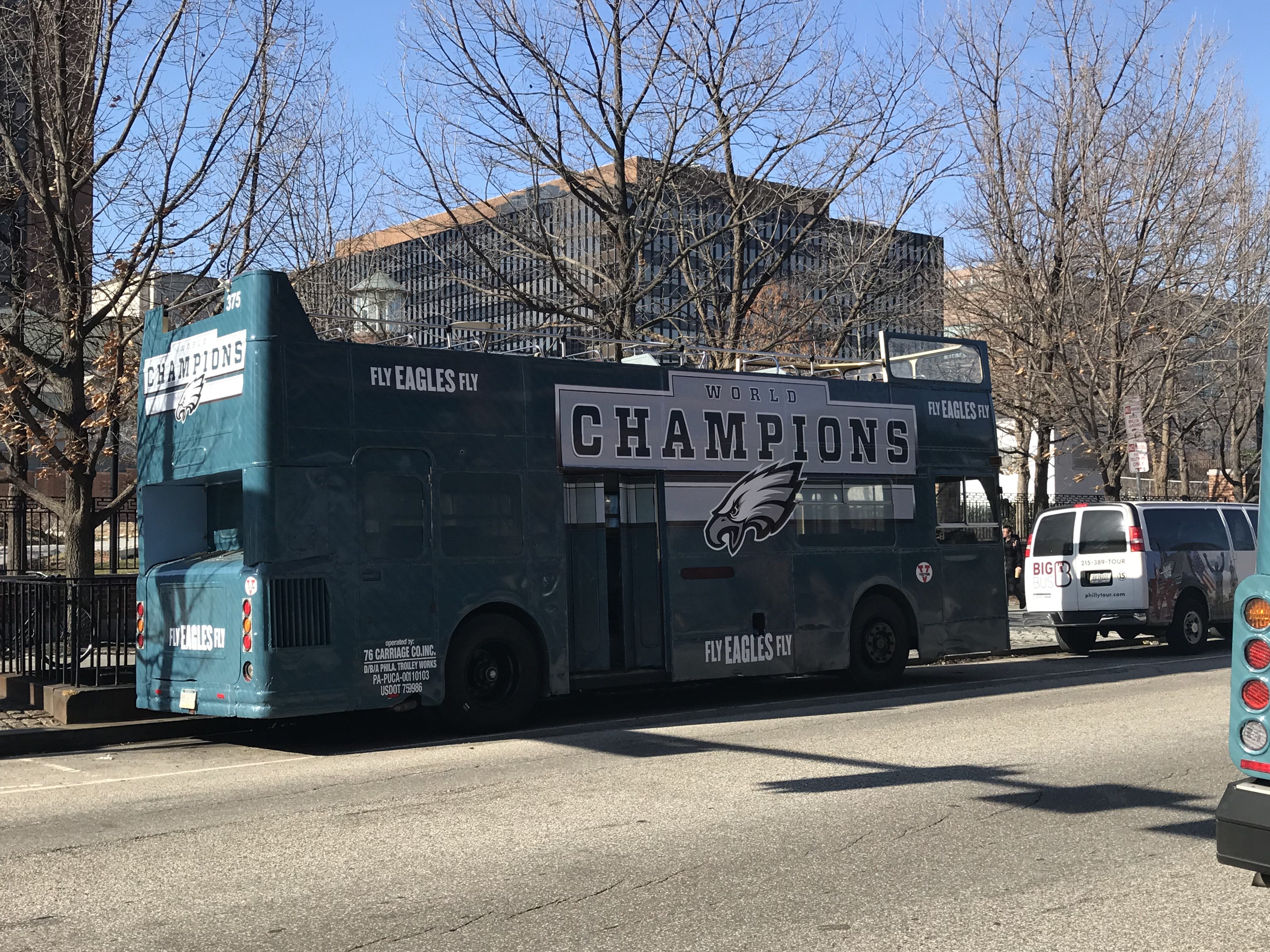 Can you sense that unfamiliar feeling? It’s one of victory.

There’s a vibe in Philadelphia that’s unprecedented, at least in recent memory. People are walking through the streets decked in Eagles gear often sporting the words “Super Bowl Champions.” Some may smile at you. Others, possibly inebriated, will call for a high five. It’s very possible an “E-A-G-L-E-S EAGLES!” chant will come your way. Or, you might be addressed with a simple, “Go Birds.”

Regardless, it’s impossible not to take in the wonderful team spirit and feeling of accomplishment.

Even if by coincidence, the Eagles’ success is all of a sudden contagious. Heading into the Sixers game vs. the Chicago Bulls and Flyers vs. the Columbus Blue Jackets, the two indoor winter teams are 12-0-1 since the Birds beat the Patriots.

There’s an energy in Phillies camp which was missing the past handful of years.

Don’t mistake this enthusiasm as “hokey.” Times are different in these parts.

You experienced a Super Bowl winner. Now, it’s time for these other teams to step up. And the number one reason is they’re more than capable of making great strides. They should be held to certain standards.

76ers Prediction: Advancing to at Least the Second Round

The 76ers are well within striking distance of the No. 4 seed in the Eastern Conference, and by chance Cleveland tumbles, the third seed. Assuming everyone, especially Joel Embiid, stays healthy, with a limit on turnovers as well as improvement in keeping double-digit leads, the Sixers should make noise come late April and early May.

Youth aside, on paper they’re as talented as most of the teams in front of them and they can run with anyone in the East. Embiid, Ben Simmons and Dario Saric should continue to improve. JJ Redick needs to be the experienced veterans he’s being paid to be. Marco Belinelli should provide another scoring threat off the bench this team missed with the absence of Markelle Fultz. And speaking of said Fultz, if the 76ers are serious about being a force, shut him down for the season so his mystery is no longer a distraction.

Like Allen Iverson’s first playoff appearance, this Sixers team should get to the second round. In a matchup against either Boston or Toronto, a seven-game series isn’t a pipe dream. Who knows what happens at that point?

Hard to find someone other than the Flyers who thought they would be in the playoff picture following a 10-game winless streak. But, they picked up points during that slide and are playing some of the best hockey in the NHL since.

Like their Wells Fargo Center roomies, the Orange and Black aren’t out of reach of entering the postseason with good seeding.

They’re determined to get to the top of the Metropolitan Division standings and they should be. A Wild Card spot isn’t good enough. With young talent that’s blossoming before our eyes, speed, good defensemen and producing veterans, this is a good mix.

And in hockey, any team that makes the playoffs can make a run. The Nashville Predators were technically the 16th seed last season and look how far they went.

Because basically any given team can win on any given night in the NHL, trying to predict how far the Flyers can make it is too difficult. But, they should be in the dance and are very capable of being a tough out.

New Phillies manager Gabe Kapler brings a breath-of-fresh-air approach that includes the goal of playing meaningful games in September. For the first time in years, management expects a tolerable product and the owner is speaking publicly about his desire to reach the end of the rebuild.

It’s encouraging that the front office is reportedly engaging in conversations with Jake Arrieta’s representation.

It’s even more exciting that the current roster features a talented, young lineup with a potential core for the future, as well as a solid bullpen. The starting rotation will be this team’s Achilles heel, but the National League East isn’t intimidating.

If the Phils can stay in the hunt come August and September, anything can happen.

The Eagles’ Super Bowl void was the city’s biggest hump. The hurdle was finally jumped. A huge burden is lifted.

The Sixers “tank” is over and there are legitimate young players on the court together.

The Flyers are finally playing with a sense of purpose.

There’s a major voice of the Phillies who is stressing win now.

Buckle up, because it’s going to be a fun ride. Expect it. Demand it.

• Eagles head coach Doug Pederson was left in a sticky situation when Frank Reich left for the Indianapolis Colts. Who should he give the job of offensive coordinator to? Pederson ultimately stayed in-house and promoted wide receivers coach Mike Groh, while passing over long-time Birds assistant Duce Staley. But, the running backs coach isn’t only keeping his current role, but adding on the title assistant head coach. Pederson valued Reich’s role, so leaving the spot vacant, while appearing fair to Groh and Staley, probably wouldn’t be the best move. I don’t know if Pederson could’ve handled this delicate situation any better. Staley might have missed out on the prize, but being assistant head coach isn’t a bad résumé builder. Not to mention, the new wide receivers coach will need to fill big shoes vacated by Groh. The same would be said if Staley got the job instead. In the end, don’t be mad at Pederson for his decision. Shoulder your disapproval towards Patriots offensive coordinator Josh McDaniels, who should be the Colts’ head coach today and not Reich.

• It doesn’t matter what Nick Foles says or doesn’t say on national television appearances such as Jimmy Kimmel Live! or Ellen. It doesn’t matter if his agent wants him to cash in big with another team from his Super Bowl run, which could very well be the case. The Eagles control the Foles situation for 2018 and, as I wrote last week, trading him is a bad move because the backup quarterback spot may be the most important position on the field other than the person in front of him. Foles is priceless insurance. There is no quarterback controversy. Carson Wentz is the starter. If Wentz isn’t ready to go, Foles will take the reigns to begin 2018. Once Wentz is healthy, no matter how Foles is playing, the North Dakota State product takes the job over. As long as “Nick does Nick,” he shouldn’t be allowed to cash in his Super Bowl success until 2019. This should be the easiest decision the Birds make all offseason. Keep Foles. Period.

• Eagles wide receiver Alshon Jeffery reportedly played with a torn rotator cuff all season. Between the regular season and postseason, Jeffery caught for over 1,000 yards and 12 touchdowns. Legendary.

• The Eagles filed trademark to own the naming rights for the Super Bowl trick play, “Philly Special.” They were the eighth team to file. It shouldn’t even be a debate. It’s highway robbery if they’re not awarded exclusivity in this matter. Without them, “Philly Special” doesn’t even exist.

• Joel Embiid proved in the NBA All-Star Game that he can play with the big boys. Embiid finished with 19 points and eight rebounds in 20 minutes, possibly making the case for MVP if Team Steph held on. Their chances weren’t aided by former Sixers assistant Mike D’Antoni sitting the center during the defensive possession in which LeBron James scored the game winning layup.

• Speaking of the All-Star Game, Kevin Hart’s player introduction presentation preceded by a very lengthy skit with Rob Riggle was awful. Not to mention, I’m burying the lede. Fergie’s national anthem rendition might be one of the worst ever, if not the worst. Fortunately the basketball game was much better than any in recent years. Stop trying to be cute at these big events. As long as the game is good, everything else is secondary. Keep it simple.

• Heading into Thursday’s night game against the Columbus, the Flyers are on a three-game streak without being on the penalty kill. How is that possible with a player like Radko Gudas? Jokes aside, it’s a reason why they’re so good lately. They need to keep that up.

• Phillies outfielder Nick Williams hit a home run so far during batting practice that it put a dent in manager Gabe Kepler’s rental car. Kap didn’t care and was happy Williams went yard. This dude gets what winning in Philadelphia is all about. The question remains though, can he put a lineup together, double switch and make effective pitching changes? In other words, can he manage?

• Eagles center Jason Kelce stopped by Phillies spring training to speak to them as they embark on a new season. How long before the greatest Mummer ever runs for political office of some sort?