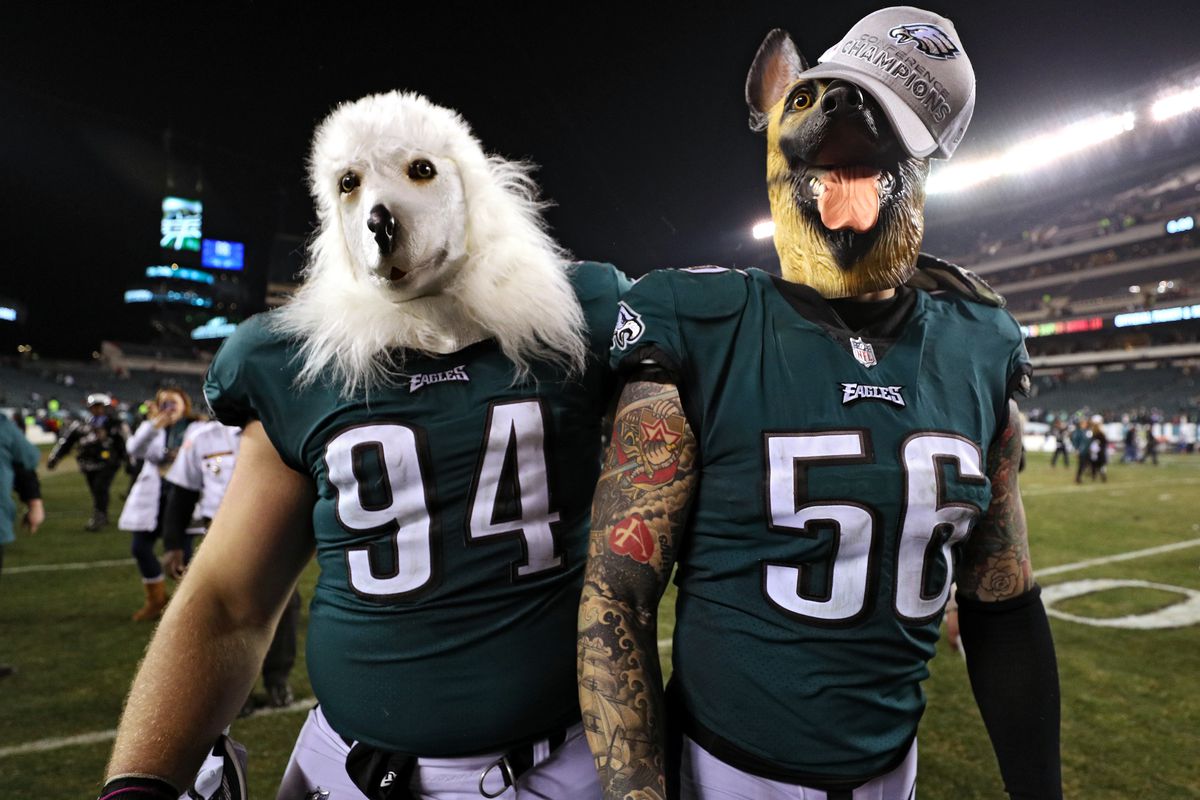 Will the Philadelphia Eagles write the final chapter of the greatest underdog sports story of all time, or is Tom Brady and the New England Patriots going to continue penning additional pages to the greatest run in NFL history?

Will the Eagles and Nick Foles continue to have success with the run-pass option in Super Bowl LII? The Atlanta Falcons predominantly play a Cover 3 and the Minnesota Vikings man-to-man, but the Patriots mix a lot of different coverages and fronts. One drive they might play zone, another they might blitz and another they might play man-to-man. Foles’ decision-making will be put to the test against the brilliance of Bill Belichick and defensive coordinator Matt Patricia.

RPOs allowing Foles to be more decisive when throwing the ball and a couple solid completions to Jeffery pic.twitter.com/hJehNF1Fek

At one point during the season, the Eagles went through a 1-for-17 stretch on third down with Foles as the starter. Philadelphia hadn’t converted a 3rd-and-10 plus until the NFC Championship Game, when Foles went 10-of-11 for 159 yards and two scores on third down in all.

Foles to Jeffery for a 53-yard touchdown!! pic.twitter.com/jeSC11bjvn

Pederson was a step ahead of defensive mastermind and Minnesota head coach Mike Zimmer all night in that title game. Philadelphia RPO’ed the Vikings to death in the first half, which plays to Foles’ strengths of not making him go through progressions. It got him into a rhythm and as the confidence built, Pederson became more and more aggressive with his play-calling. It’s been a remarkable turnaround.

This is the 27/2 Nick Foles pic.twitter.com/WzfvBv56Lg

Stephon Gilmore and Malcolm Butler are solid cornerbacks on the outside and might be able to match up well against Torrey Smith and Alshon Jeffery, but the matchup to watch is Nelson Agholor against former Eagle Eric Rowe in the slot. Rowe is more suited to be on the outside, he’s a physical, press-man corner. Agholor should be able to use his quickness and sudden change of direction to make some plays against the stiff-hipped Rowe.

Zach Ertz has been Foles’ go-to target since he’s taken over for Wentz, but the Patriots are known for eliminating an opposing team’s best weapon. I believe they’ll have a strategy to combat him, but Philadelphia is three deep at tight end. If Ertz is blanketed, Trey Burton and Brent Celek could potentially make plays in the passing game.

New England allowed a healthy 4.7 yards per carry during the regular season, which was 31st in the NFL. The Eagles, meanwhile, put up a fourth-best 4.5 yards per tote. The average NFL game has 12 possessions from each team, but a recipe for a Philadelphia victory is to keep the touches limited. If the Birds are running the football effectively and methodically moving the ball down the field, that keeps Tom Brady off the field.

Ajayi getting it going early on pic.twitter.com/ReZf3V7xJX

Jay Ajayi still hasn’t had 20-plus carries in a game since coming to Philadelphia, but has seen an increase in his workload in the playoffs. His 15 runs in the Divisional Round tied a season-high and his 18 for 73 yards against Minnesota set it. Maybe he gets to 20 on Sunday. The Eagles have a big advantage off the right side of their offensive line with right guard Brandon Brooks and right tackle Lane Johnson going against defensive tackle Lawrence Guy and defensive end Eric Lee. LeGarrette Blount, who has tapered off towards the end of the season but did score a touchdown against the Vikings, faces his former team for the first time. Blount, of course, won a Super Bowl with the Pats last year.

The Eagles just went on a 6:12 drive that went 75 yards in 12 plays with a backup QB against statistically the best defense in the NFL. Blount scores from 11 yards out to finish off the dominant march. Amazing! pic.twitter.com/RfDHmgKtUQ

The screen game is also another area where the Eagles might find some traction. New England surrendered the second most yardage to opposing running backs coming out of the backfield and yielded 59 yards on three screens to Corey Grant in the AFC title game.

Rush with four and drop back seven, that’s the recipe to defeat Brady and the New England offense.

If only it were that simple.

The Eagles have a formula to give Brady a run for his money with a defensive line that led the NFL in pressures and like the New York Giants did during Super Bowl wins in 2007 and 2011, they lined up defensive end Justin Tuck as a defensive tackle to get their best pass rushers on the field at the same time. In 2007, that included Michael Strahan and Osi Umenyiora along with Tuck. Philadelphia, of course, sports a defensive line that includes Fletcher Cox, Brandon Graham, Chris Long, Derek Barnett, Vinny Curry and Timmy Jernigan. It has also lined up Graham as a defensive tackle to get after the quarterback, borrowing that tactic from the G-Men.

Derek Barnett with the strip-sack!! Minnesota tried to bring a tight end across the formation to block him, not a good idea. pic.twitter.com/0BOZExrJLl

New England’s offense is predicated on timing and the ball is out of Brady’s hands within three seconds. If you blitz, Brady will pick you apart. If you play zone, Brady will pick you apart. The best tactic is to use press-man coverage, but the Eagles normally play off. I’m interested to see if defensive coordinator Jim Schwartz will call for more press in this game. Philadelphia’s secondary has stepped up immensely since its disappointing Week 15 showing against the Giants. The matchup to watch will be the quick and explosive Brandin Cooks going against Ronald Darby, who has looked liked the lockdown corner the Eagles thought they were getting the last month or so.

Chris Long and Vinny Curry have been the unsung heroes on defense tonight. Curry slices through to get pressure on Carr again and Darby gets the pick! pic.twitter.com/hpNbuky1F7

Speaking of that Giants game, Eli Manning threw the ball 57 times while only running it on 23 occasions. Philadelphia led the NFL in rush defense, but has had a few hiccups against quarterbacks who take those quick three-step drops. I expect something similar from the Patriots on Sunday.

While Brady gets rid of the ball in a hurry, his offensive line is a weakness. Left tackle Nate Solder is solid, but the rest of the starting unit is at a disadvantage. I expect Jernigan to have his way with left guard Joe Thuney, as will Graham when he is in at defensive tackle, center David Andrews is below average, Cox should dominate right guard Shaq Mason and Cameron Fleming is at a disadvantage against Graham or Chris Long. Fleming took over for Marcus Cannon, who was placed on injured reserve in late October with an ankle injury.

Limiting tight end Rob Gronkowski will be the Eagles’ biggest challenge and safety Malcolm Jenkins is most likely going to be dealt with the task of covering him. Gronk was cleared to play in the game on Thursday after suffering a concussion in the AFC Championship Game.

The most unstoppable weapon in the NFL is the @Patriots Rob Gronkowski. New Xs and Os video on his talents, how the Pats set him up for success and beware of doubling him. Full video can be found here –> https://t.co/1LlD5zToaq pic.twitter.com/2crVwf5Oc0

While I don’t forecast New England to tote the rock much, it’s passes out into the flats to the running backs will essentially be de facto runs. The Eagles have had some issues covering running backs since Jordan Hicks’ injury and the Patriots have a three-headed attack in Dion Lewis, James White and Rex Burkhead.

The diminutive and former Eagles castoff, Lewis, is a potential x-factor in this contest. He’s extremely quick and shifty in space. Lewis also led the Patriots in rushing yards with 896. White came out of nowhere to lead the Patriots in receptions with 14 during last year’s Super Bowl.

Lewis was asked earlier in the week what he remembered most about his time in Philly and he said not playing.

Dion Lewis on what he remembers from his time in Philadelphia: “Not playing” pic.twitter.com/Th4m57jWjr

The Eagles have a recipe to get after Brady and collapse the pocket and if the pass coverage holds up well enough consistently throughout the night, the pressure can get home. Limiting the possessions and keeping Brady off the field is also going to be important and with the Patriots allowing 4.7 yards per carry, I envision Philadelphia’s offensive line being able to get constant push. I also believe Nelson Agholor can have a big game against Eric Rowe in the slot. I’ve got the Birds and Jake Elliott kicking a late field goal in the final minute to win it.