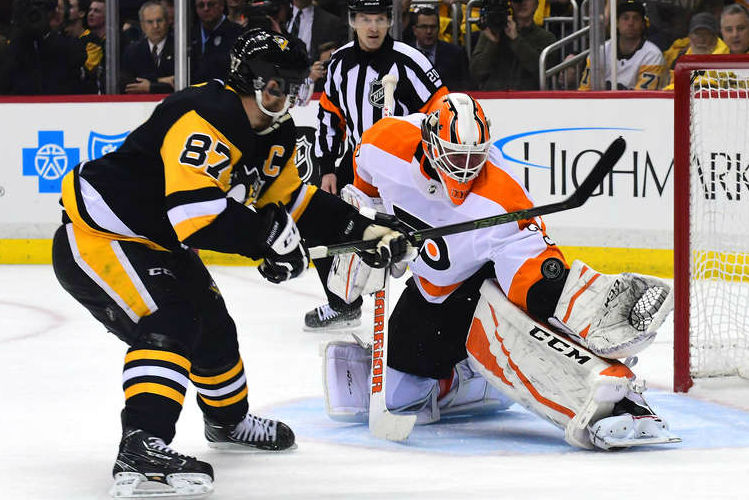 After a 7-0 drubbing in the opening game of the 2018 Stanley Cup Playoffs, the Flyers desperately needed to show some life Friday night in Game 2 of their best-of-seven series against the Penguins in Pittsburgh.

Flyers coach Dave Hakstol decided not to make any changes to the lineup, most notably starting Brian Elliott even though he allowed five goals on 19 shots Wednesday night.

Elliott did not disappoint. He stopped 34 of 35 shots Friday night to lead the Flyers to a 5-1 win over the back-to-back champs. He backstopped the Flyers to four straight penalty kills and did not allow any goals until the game was well in hand in the middle of the third period.

Not only did Elliott keep his team in the game, but the Flyers poured on some offense on a very suspect Penguins defense. Shayne Gostisbehere got the Flyers first goal of the playoffs with less than a minute left to go in the first period. It was the Flyers’ first power play goal of the night and a key point for them to not only break the confidence of Matt Murray, but to also start winning the special teams battle.

On their first shot of the second period, Sean Couturier lit the lamp less than a minute into the stanza, and the Flyers never looked back. There was no other scoring in the second period but the Flyers would pile on three more goals before the game ended.

#Flyers get another one early in the second! 2-0 FLYERS! #EarnTomorrow pic.twitter.com/rM7obU2X5E

Travis Konecny was able to blow by a Penguins defender to score the third goal of the game and give the Flyers some much needed depth scoring and Nolan Patrick added another power play tally to give the Flyers a 4-0 lead after a beautiful pass by Couturier.

Holy SHIT what a pass by Couturier! pic.twitter.com/tibHZ5RnmQ

After the Penguins scored a short side goal on Elliott, the Flyers allowed no more. Andrew MacDonald potted an empty-netter to seal a tied series going back to Philadelphia.

The Flyers now have home-ice advantage and the series is theirs to lose. If a team can go 1-1 on the road in the NHL playoffs, they put themselves in a great position to succeed. The Flyers have done just that.

The Flyers host the Penguins at 3:00 P.M. ET on Sunday afternoon and the Wells Fargo center is going to get loud as they try to help the Orange and Black to a playoff series lead.