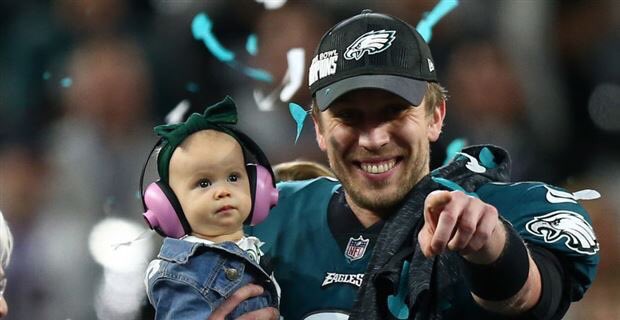 The vibe inside the Eagles locker room is contagious.

This is a group coming off an improbable championship run, determined to repeat.

Their attendance in a shortened off-season was excellent. They weathered the storm of a controversial canceled White House trip. Key players are returning who didn’t get to play in the Super Bowl because of serious, unfortunate injuries. Howie Roseman and company upgraded at important positions, such as defensive line with Michael Bennett and wide receiver with Mike Wallace.

The Birds are poised and capable of going back-to-back.

That being said, the best move they made since winning the title remains the one they didn’t make.

Keeping Nick Foles was a must, regardless of what type of trade offers Eagles brass received, if any.

The Birds just wrapped up a three-day minicamp and don’t need to return to the Novacare Complex until the end of July for training camp. Despite Carson Wentz looking better than most expected, the mystery if he’ll be ready for opening night versus the Falcons still looms.

Last season, the Eagles captured the top seed in the NFC because of a tie-breaker over the Minnesota Vikings, essentially a one-game cushion. They were a couple more losses from maybe being forced to play the Wild Card round. Home-field advantage proved to be huge for the Birds prior to the Super Bowl. It shows that every game and week counts during the regular season, no matter what the circumstance.

If Wentz ends up being on the sideline at the beginning of the 2018 campaign because the team doesn’t feel he’s healthy enough, using Nate Sudfeld in those games would be too risky. The team may crow about Sudfeld’s ability, but it’s unwise to rely on a backup quarterback whose experience is less than one NFL game.

To be honest, myself and many others would be shocked if Wentz didn’t start September 6. The 2017 MVP candidate is clearly determined after watching what was his supposed to be his championship won from the sideline. But neither he nor his head coach are stepping on the limb and saying anything definitive. It would be irresponsible for them to do so. There is too much time between now and Week 1. A declaration serves the team no purpose and only gives Atlanta a game planning edge.

Assuming Wentz doesn’t play pre-season games, which is also undecided, we won’t learn the answer to the Eagles version of “Final Jeopardy” until a week to go before the opener, or maybe later. Who knows?

And since no one seems to know if the third year signal-caller will be under center to start the season, the Super Bowl MVP continues to be insurance with priceless premiums.

The Ringer is the Sixers, and Markelle Fultz’s, worst nightmare

Last week, The Ringer’s Kevin O’Connor shared in his story about potential 76ers general manager options that some in the team’s front office wanted to take a second look at either Jayson Tatum or Lonzo Ball after Markelle Fultz struggled in his pre-draft workout for the Sixers a year ago. But, Bryan Colangelo turned down the idea.

If this is true, it’s another indictment upon Colangelo’s tenure in Philadelphia. Nothing would be lost by giving Tatum or Ball another workout. If Colangelo’s staff felt the need to do so, he should’ve listened. Until Fultz proves himself as essentially being worth two first-round picks, major egg will be on Colangelo’s face.

Hey, remember when Julius Erving told ESPN Tatum probably should’ve been the No. 1 pick? Just the other day when Dr. J made a sports bet in New Jersey, we were reminded that he works for the organization, since he wouldn’t place a wager on the Sixers.

I’m certainly not saying Erving is the leak or one of the front office members who advised that to Colangelo, but the idea that there wasn’t and isn’t unified consensus that Fultz was the right choice for the number one overall pick remains concerning about the ability for that organization to operate at a championship level.

Alright, there is no more excuse for media members to make. Let’s face the facts. The much improved Phillies aren’t drawing well at Citizens Bank Park, meaning the fan base isn’t ready to be fully invested like they were during the latest golden era.

Thursday afternoon’s attendance in the rubber game versus the Rockies on an absolutely gorgeous day for baseball, which included a pre-game ceremony honoring Jim Thome, drew a paid attendance of 22,500. That means subject about a few thousand or so from that.

No one could use the excuse of weather or school. It’s mid-June.

The small crowds make the team less of a story because you start to wonder how many people are interested.

Now, while I don’t agree with someone who doesn’t believe the 35-31 Phils heading into Friday night are worth his or her time, I don’t blame them, either.

It’s factual that the last five seasons or so weren’t enjoyable. The product steadily declined during much of that time. It got to a point when the team featured no identity. The fan base needs to be rebuilt.

Now, if the organization isn’t frightened about two Mondays from now, they should be.

It’s not that they won’t draw from June 25 to 27. The only problem is the stands will be full of Yankees fans, who are everywhere and travel extremely well.

Regardless of how the Phils are doing at that point record-wise, it will an unavoidable story.

• Speaking of irrelevant teams, how many of you noticed that Flyers general manager Ron Hextall held a pre-draft press conference this week? Did you know the Flyers were drafting 14th and 19th overall in the first round this year? Did you know the draft was next week? I wouldn’t be surprised if you said no. Again, I wouldn’t blame you if you admitted to that, either. The sad truth is that’s how far the Flyers have fallen in this town. Their crowds may be decent, but that’s because they possess a very strong, loyal base of hardcore fans who need to fill a 20,000-seat arena rather than a 43,000-seat ballpark. However, which team, Phillies or Flyers, creates more conversation on talk radio or television? It’s not even close.

• The Eagles’ championship rings are spectacular. They look phenomenal, aren’t cluttered and tell the whole story of the Super Bowl 52 champion Birds. Whether it’s the “Philly Special” reference, the slogans or the salute to the fans, the bling is the final chapter of a remarkable season.

• I didn’t know Al Meltzer personally. I never even met “Big Al.” My only recollection of Meltzer was being a fan of his work on Comcast SportsNet watching the station as a kid. After Meltzer passed away earlier this week at 89, I had the opportunity to not only read about his incredible career and watch some of his sportscasts from decades ago on YouTube, but also talk to a former colleague of his from Channel 10. This person had nothing but wonderful things to say about “Big Al.” His Hall of Fame memberships speak for themselves. His work speaks for itself. The tributes speak for themselves. “Big Al” was one of a kind and Philadelphia was lucky to call him ours.