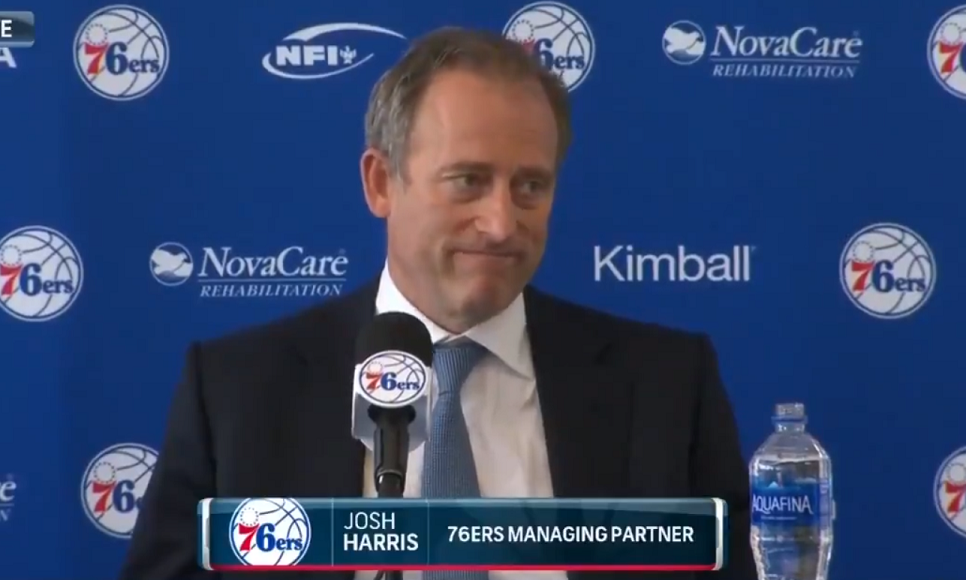 About a week and a half into NBA free agency, the Sixers’ highly-anticipated off-season isn’t resulting in momentous occasions at their luxurious headquarters overlooking the banks of the Delaware River in Camden.

There were the official announcements of J.J. Redick’s re-signing, which was an absolutely necessity, and the underwhelming trade for 31-year-old small forward Wilson Chandler, who held a conference call with the media Tuesday. Amir Johnson and Nemanja Bjelica reportedly agreed to one-year deals.

With the uncertain future of disgruntled San Antonio Spur Kawhi Leonard, and apparently soon to be ex-Thunder forward Carmelo Anthony, Brett Brown’s quest for “star hunting” this off-season isn’t over yet, but it might as well be on life support. Not to mention, to even consider Anthony a star at this point in his career is a stretch.

Let’s be real with each other. The 76ers never stood a chance for LeBron James. But, their failed off-season to date isn’t because their efforts came up short. They should be given credit for trying. James made a mistake in picking a Western Conference team with no legitimate shot of winning a championship in the next three seasons, give or take. But, the Sixers flopped as a result of ownership’s explanation behind their unsuccessful quest.

According to Ohm Youngmisuk of ESPN, managing partner Joshua Harris is under the impression the Sixers were in contention for arguably the best basketball player in the world.

“I think they considered us very strongly,” Harris told Youngmisuk at the Las Vegas Summer League.

Harris added that while he’s falling into the area of speculation, he thinks James and his camp were, “really serious [about Philadelphia]. The fact that they took the meeting with us was something that they didn’t view lightly, so I think that they were very serious about it.”

Someone please cue a laugh track because these remarks are worthy of a bad sitcom.

That type of thinking is why Harris’ ownership tenure with the 76ers is filled with so many controversies and embarrassing moments. Harris’, and his partners’, inexperience shows almost every time they speak on basketball matters. It appears Harris fails to realize that Sixers brass flew cross country to meet with James’ representatives when it appears a decision was already made.

Just over 24 hours after Paul George, another reported target of the Sixers, chose to return to Oklahoma City, Klutch Sports posted a press release that was the gut punch to 76ers nation, announcing James was taking his talents to La La Land, supposedly not long removed from meeting with Sixers brass, which according to ESPN’s Brian Windhorst, per The Athletic’s Derek Bodner, was solely out of “courtesy.”

.@WindhorstESPN said on ESPN News that LeBron had come to this decision days ago. Said today's meeting with the #sixers was a courtesy meeting. Had some interest, but they were never in the running. Says it was a two team race: Cleveland and Los Angeles.

Bleacher Report’s Ken Berger spoke to someone “familiar” with James’ thinking, and learned that LeBron spurning Cleveland again for the Lakers wasn’t about “chasing a ring.”

“That franchise, with the pieces they have and the position they can be in, he absolutely believes they can be in a position to win over the next few years,” the person familiar with James’ thinking said. “He spent a lot of time talking to Magic Johnson about that.”

Berger later shared this nugget from the person “familiar with LeBron’s thinking”:

“The romanticism of playing in a Laker uniform had an appeal to him,” the person familiar with this thinking said.

And according to Tania Ganguli and Broderick Turner of The L.A. Times, Magic Johnson’s meeting with James the night before his rep met with the Sixers closed everything.

With the dust settled, if you really think about it, the Sixers’ chances were slim at best. They could pitch playing with Joel Embiid and Ben Simmons, but think about the people trying to sell that combination. They were Brown, an interim general manager, and Harris, someone whose short ownership history is filled with moments worth forgetting – whether it’s the Andrew Bynum fiasco, Sam Hinkie’s alleged tanking, Hinkie’s infamous 13-page resignation, countless injuries to young players and a Twitter mess with his previous head of basketball operations.

Sometimes it’s hard to remember that this franchise possesses such a young, promising team that is fresh off a 52-win season.

• The Markelle Fultz mystery grows. The Sixers’ 2017 first overall pick isn’t playing in the Las Vegas Summer League, instead focusing his off-season on working with shooting guru Drew Henley. Nonetheless, Fultz was in attendance at Friday’s games, which included 76ers-Celtics, at one point even jockeying for camera time by video bombing a Luka Doncic ESPN interview.

On top of that, Hanlen posted a 10-minute video on YouTube  which shows the summer workouts his clients are putting in. You can see Fultz driving the lane and dunking, but not shooting. The editing is perfectly crafted to not give you the whole picture. For the Sixers sake, hopefully the final product is worth watching.

? Go behind the scenes with @DrewHanlen working out the @nba's best; featuring @jaytatum0, @JoelEmbiid, and @TheRealMoBamba playing ones. Plus unseen footage of @MarkelleF’s shot transformation.

•The Phillies are nearing the July 31st non-waiver trade deadline. While many fans hope they land a big fish like Manny Machado, their best option might be someone of lesser value. Machado will cost a lot and may not even re-sign with the Phillies as he’s in the final year of his contract. There’s no question he’s going to be a very expensive free agent, which gives off the impression that he’ll want to field as many offers as possible. If you remember back 10 years ago, you’ll remember the 2008 World Champion Phillies didn’t make a big splash at the trade deadline. They added fourth starter in Joe Blanton, and later a bench slugger in Matt Stairs before September hit. In 2009, the Phillies gave up a package that included Carlos Carrasco for Cliff Lee, which worked out beautifully before Ruben Amaro Jr. traded the left-hander to Seattle the ensuing off-season. In 2010, they sent J.A. Happ, a left-hander who’s an All-Star this season, for Roy Oswalt. That also worked out well in the short-term. In 2011, they sent a group that eventually included Domingo Santana to the Brewers for Hunter Pence. The awkward outfielder lasted only a year in Philadelphia. Now, Machado is certainly not long in the tooth. He’s a 26-year-old with an entire career still in front of him. That doesn’t mean giving up a lot for a rental is the right move to get the 2018 Phils to the playoffs. A B-Level acquisition can certainly get the job done.

• Nick Foles is not only a Super Bowl MVP, but a best selling author.

Believe It by @Eagles Super Bowl MVP @NickFoles will debut at No. 5 on the New York @nytimes Hardcover, Nonfiction list on Sunday, July 15. He'll also be a @PublishersWkly and @USATODAY best seller when those lists are released. Congrats, Nick! @TyndaleHouse

Of all the stories surrounding the 2017-18 Eagles, whether it’s Doug Pederson proving he’s an NFL coach, the injuries or the underdog theme the team inherited, the chapter of that amazing book was that of Foles, who nearly quit football after being phased out by the Rams, which followed his unceremonious shipping out of Philadelphia by Chip Kelly. Even if he never takes another regular season or playoff snap in an Birds uniform, there are few athletes who are more “Philadelphia” than “Nicky 6.”