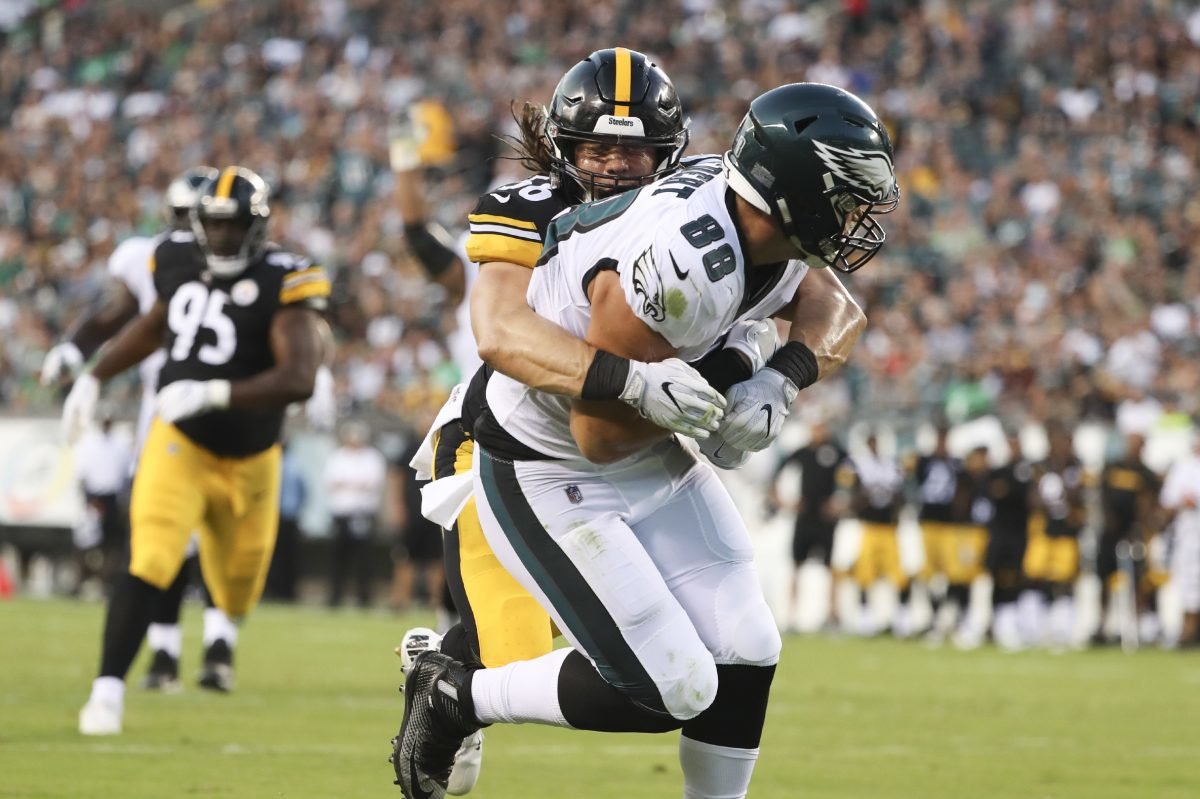 Dallas Goedert might wind up being the only Dallas that’ll never suck and I might ever love.

The second-round rookie caught four passes for 66 yards and a touchdown as the Philadelphia Eagles dropped their preseason opener 31-14 to the Pittsburgh Steelers on Thursday night at Lincoln Financial Field.

Goedert looked extremely smooth and fluid, hauling in a 26-yard corner route for his first career reception and later a 19-yard snag along the right seam. His 15-yard TD catch was his most impressive, showing off fantastic awareness for an FCS rookie as he found the soft spot in the defense and helped out his quarterback Nate Sudfeld on his escape from the pocket.

Goedert did come with some imperfections, but the promise has me drooling. He’s a natural hands catcher, his mittens are soft and he dropped an easy one in the first half. He also missed a couple blocking assignments, including a few when he was asked to pull and be on the move. That also doesn’t mean there hasn’t been improvement in his technique as shown on the long Ajayi run where he was able to get his arms extended and drive his defender several yards backwards.

The good and bad of Dallas Goedert in this one series. Nice block on the long run by Ajayi, got arms extended, (btw Richard Rodgers washed everybody down the line). You can see the natural hands on the 26-yard catch, but then the drop. Also a missed block on 3rd down. pic.twitter.com/6pYRG7Q6MG

We had a scare from Sidney Jones in his preseason debut. He played nickel cornerback and didn’t really have much action come his way, but did hurt his left foot on a play where he was going for a tackle while his teammate Nate Gerry upended him. Jones survived the scare without any repercussions.

Jones’ best play came on the opening kickoff when he made this tackle.

Sidney Jones with a nice tackle on the game's opening kickoff pic.twitter.com/FeAwoWnCLH

There was also this, smh. I get that it’s the preseason and the league wants to set an example so the players know what to look out for this upcoming season, therefore it’s going to get called more, but this is going to turn into an unwatchable product very soon if flags are thrown for making good football plays.

What a stupid rule pic.twitter.com/yE3eiw5eVy

De’Vante Bausby had a lot of Training Camp hype heading into Thursday night’s game and he delivered. He trusted his eyes and jumped a couple balls, while also blanketing a wide receiver attempting a double move.

Nice sequence of plays by De'Vante Bausby. Good job of trusting his eyes and jumping the route the first two plays, doesn't bite on double move on the third. pic.twitter.com/fPMp2v7eH0

Kamu Grugier-Hill has the early lead for the weakside linebacker spot. He played fast and made a couple nice tackles in the running game, including this when he played an option beautifully before closing in on the running back for a loss. Nate Gerry and Grugier-Hill saw the snaps there for most of the first half, free-agent acquisition Corey Nelson was really nowhere to be found until the final 30 minutes.

Nice job of playing that option by Grugier-Hill and closing on Ridley for the tackle for loss pic.twitter.com/JzOpjUfOyZ

Sudfeld had his ups and downs. He started as Carson Wentz and Nick Foles sat out with their respective injuries. He threw a poor interception early on, played better as the game went on. He did a good job of extending the play on Goedert’s touchdown and threw a nice ball to Shelton Gibson on his 63-yard score.

Gibson struggled mightily with the drops last year, but hauls in this 63-yard reception along the right sideline. Easy separation too on this go-route. pic.twitter.com/2t1Mi8GZ2L

This could provide Gibson with a nice confidence booster as he continues his second preseason. He struggled mightily with the drops last year and created easy separation on that score. He’s in the mix for the No. 5 wide receiver spot on the roster.

Rasul Douglas allowed a poor touchdown reception to JuJu Smith-Schuster, but recorded an eye-popping interception later when he came on his route onto the shorter one and closed quickly to snatch it.

Douglas got beat deep earlier by Smith-Schuster, but nice read here to come off his man and take the shallow route for the interception pic.twitter.com/6yMUW8OMQ2

A penalty wiped away an 81-yard punt by Cameron Johnston, but it was a bomb!!

A penalty wiped away this 81-yard punt by Cameron Johnston, but this was a bomb!! pic.twitter.com/R2p996fECy

Philadelphia heads to Foxborough next Thursday night in a Super Bowl preseason rematch with the New England Patriots.