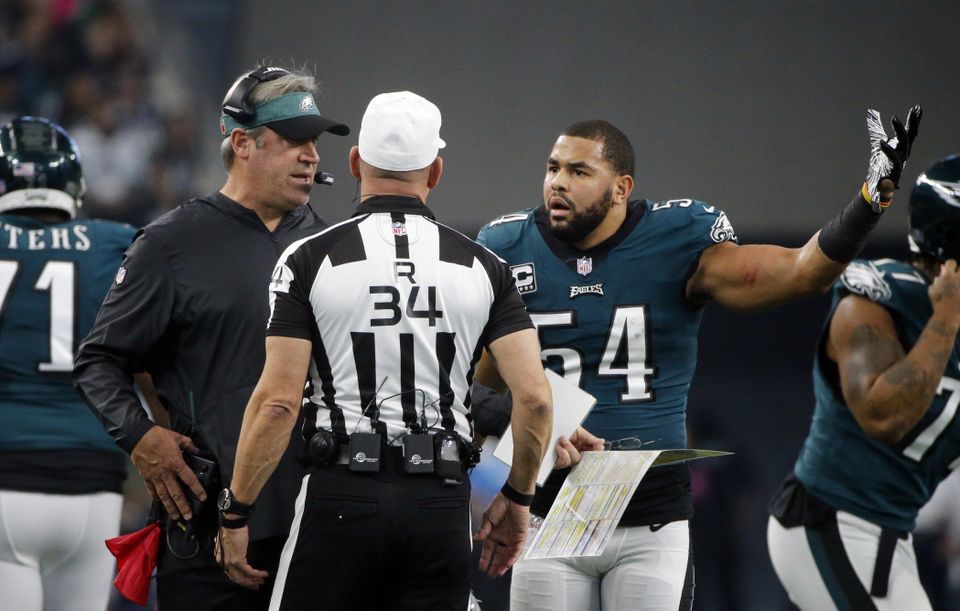 “Whoever’s watching that in New York should stay off the bottle” pic.twitter.com/Stwpzw0rpB

“Whoever’s watching that in New York should stay off the bottle.”

Kamu Grugier-Hill sarcastically tweeted about it.

“Not a clear recovery” pic.twitter.com/lVexemMq2a

Sixty-eight minutes were needed to decide a victor between the Eagles and Cowboys Sunday, but all Philadelphia can think of at the moment was the controversy stemming from the game’s opening kickoff. Amari Cooper hauled in the game-winning 15-yard touchdown in overtime off a deflection by Rasul Douglas and the Cowboys beat the Eagles 29-23 to take a two-game stranglehold over Philly atop the NFC East.

Jourdan Lewis fielded the opening kick and Malcolm Jenkins layed the boom to pry it free. Grugier-Hill appeared to make a clear recovery.

Looked like a clear fumble and and then a recovery by Kamu Grugier-Hill pic.twitter.com/HiPSJTKQny

Head official Clete Blakeman explained his decision to give the ball to Dallas, via NJ.com.

“Opening kickoff, the ruling on the field was that he was down by contact before the ball came loose and so in replay we’ve got a couple of different components because we have a pile-up at the end. So, we’ve got to have clear evidence that there was a fumble, which we did. We confirmed there was a fumble in the replay review.

“The second component of it: Was there a clear recovery? And that’s just what we couldn’t confirm with the angles we had on video to make it a clear recovery by Philadelphia. So, we had to stay with the ruling on the field. …

([Bakeman] was asked about replays showing the Eagles having the ball.)

“Yes, that was discussed. So situationally we have a pile-up, I mean it’s really hard unless we have somebody with clear possession and control of it before the pile-up begins and then we can give it to them. We just didn’t have it on that one.”

Eagles head coach Doug Pederson explained what the officials told him about the call.

Just basically, it was a clear fumble and then they didn’t know exactly who necessarily recovered it at the time. It was a big pile, I guess, and just unfortunate.

The injuries to the Eagles’ secondary finally caught up with them. Cooper caught 10 balls for 217 yards and snagged all three of Prescott’s touchdowns. Prescott finished 42-of-54 for 455 yards with two interceptions and a fumble lost. Cooper made mincemeat of Sidney Jones before he exited with a hamstring injury and then went on to torch De’Vante Bausby.

De'Vante Bausby in coverage this time on Amari Cooper, who beats him for the 75-yard TD as Dallas jumps ahead again pic.twitter.com/Pc2d12dTbv

Dallas held the ball for 45:33 and ran 93 plays as opposed to Philadelphia’s 48. Another slow start to the game derailed the Eagles, who haven’t scored in the opening quarter in 10 of 13 games this season. In the four first half possessions, Philadelphia posted a pair of three-and-outs and fumbled on another.

That fumble by Carson Wentz led to a 62-yard Brett Maher field goal and a 6-0 Dallas advantage heading into the break.

Wentz, who was 22-of-32 for 228 yards struggled with his accuracy again. He missed a couple open receivers in the first half, but turned it on in the second half as he began to match Prescott score for score.

The Eagles took advantage of a Prescott miscue to get their first points of the game at the 6:04 mark of the third. Corey Graham came down with the overthrow and brought it back to the two before Alshon Jeffery got the Birds within 9-6.

A 4th-and-3 conversion to Darren Sproles led to the Eagles tying the game on their next possession.

I don't give a shit what you think Troy!! pic.twitter.com/j60n9unYcG

Dallas answered back when Dak hit Cooper for a 28-yard score.

Dak to Cooper for the TD as Dallas goes back in front pic.twitter.com/gdOZkgMfmQ

Eagles tied the game again with less than five minutes to play in regulation. Wentz completed all three of his passes for 41 yards on the march before hitting Dallas Goedert for a 3-yard touchdown.

Dak to Cooper for the TD as Dallas goes back in front pic.twitter.com/gdOZkgMfmQ

Cooper broke off his 75-yard score prior to Wentz going right down the field again. And he had to do it twice after this Goedert touchdown was called ball for this ridiculous offensive pass interference.

Goedert was swatting Heath's arm away, the amount of missed calls in this game is inexcusable pic.twitter.com/uH6NhEApWt

Wentz lofted a 42-yard completion to Nelson Agholor down the left sideline to get the Eagles inside the three.

Wentz to Agholor down the left sideline for 42 yards pic.twitter.com/EgaAYumb5O

Wentz to Agholor down the left sideline for 42 yards pic.twitter.com/EgaAYumb5O

Dallas had a chance to win it in regulation and crossed midfield, but Fletcher Cox’s sack on the final play of regulation sent the contest to the extra session.

It’s a tough one to swallow. With the NFC East race essentially over, the Eagles have to win out to even have a chance at a wild card and now they have to travel to Los Angeles next week to play the Rams.