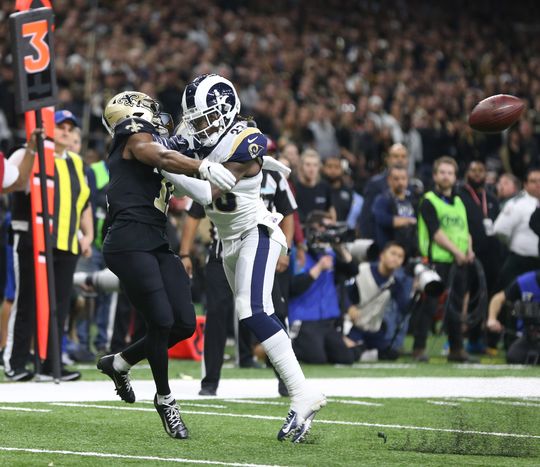 Let me start by saying, I hate the Saints. Drew Brees seems like a great guy, as does Sean Payton, but I won’t sit here and pretend that I didn’t get a ton of enjoyment watch Mark Ingram’s post-game interview.

Only thing missing was him hiding behind his ski mask. Chances are, you watched the game and don’t need an in-depth recap. Rather, here are some things that stood out to me as the game progressed.

The Rams had every opportunity to take control of the first quarter and first half. On the first drive alone, they forced the Saints into two third-down situations that both resulted in first downs and, eventually, three points. Demario Davis was all over the field to start the game, starting with a tackle for loss, and then getting the ball back on a Todd Gurley dropped pass that put Brees right back on the field. The Rams’ bend-but-don’t-break defense in the first seven minutes saved the season, holding the Saints to two field goals. Those eight points really came back to haunt New Orleans. All in all, the Rams were outclassed the entire first quarter.

Just like a fake punt turned the tide last week for the Saints, they fell victim to their own idea. McVay’s brilliant (pfft) decision to go for it was the exact spark the offense needed. Moving the ball methodically down the field – minus another huge drop by Todd Gurley – led to the Rams putting their first points on the board, and followed it with a quick three-and-out. Crowd noise appeared to be a huge problem for the visitors, but the biggest play of the half came when Goff hit Brandin Cooks for a big gain, followed by a Gurley six-yard run for the score.

Gurley gets the Rams in the end zone ? @TG3II pic.twitter.com/Vt66LeWEV3

The second half saw complete opposites in each team’s most dangerous offensive weapon. While the Saints injected a heavy dose of Alvin Kamara, Gurley saw the field sparingly. I slightly understand – Gurley had done almost nothing positive all game and the Rams had no answer for Kamara. Also, not saying they are easy plays, but Nickell Robey-Coleman had two separate opportunities to come down with a difference-making interception. Again, not easy plays, but you are in the NFC Championship Game battling against two future Hall of Famers on the road… make the damn play.

Going through the fourth quarter, the Saints’ defense looked gassed. The best part of the fourth quarter for me was the moment I realized Sean McVay will never measure up to Doug Pederson. The Rams had the ball with tons of time, it’s 4th-and-1, at the one. The Saints offense has been stuffed all half. And the wunderkind of the NFL tucks his tail and kicks a field goal? What made that decision even better was Joe Buck saying later in the quarter, “McVay isn’t thinking about Zurlein yet, he wants to win.” Is that right, Joe? Let’s rewind the tape a few minutes. LA gets saved by the #BirdBoxChallenge when every official misses an egregious and obvious defensive pass interference in the red zone with under two minutes left.

There will be riots if Saints don’t win this, how is this not pass interference? pic.twitter.com/PgWdUBxiBL

Overtime began with a BS make-up call on Mark Barron, who got ran into by a Saints tight end and was still flagged for defensive pass interference. The best defensive play for the Rams occurred at the most important moment. Penetration by the defensive line led to contact on a Brees pass that was intercepted. Goff looked the best I have ever seen him, making some high difficulty throws to avoid sacks while still moving the sticks and putting Zurlein in the position to win it.

My initial thoughts are to agree with mostly everyone: the Saints go hosed. But let’s be honest here. One play, one flag (or lack thereof) does not make a game. The Saints left eight points on the board in the beginning seven minutes of the game. They also conducted an inept offense for a majority of the second half. Oh, and let’s not lose sight of the fact that New Orleans started the extra quarter with the ball. While that one missed call was brutal, the Saints still had plenty of opportunities to win the game.

This game also showed once again that games are won at the line. For the most part, Brees threw from a clean pocket. When Suh, Darnold, Fowler, or Brockers got through, it was mayhem; it just felt like the Rams’ high-priced defense vanished for extended periods of time. Overtime specifically, it took Goff completing some pretty ridiculous throws to move the ball down the field.

All in all, if Carson Wentz can stay healthy, the Eagles are back in the NFC Championship Game after winning the division next season.