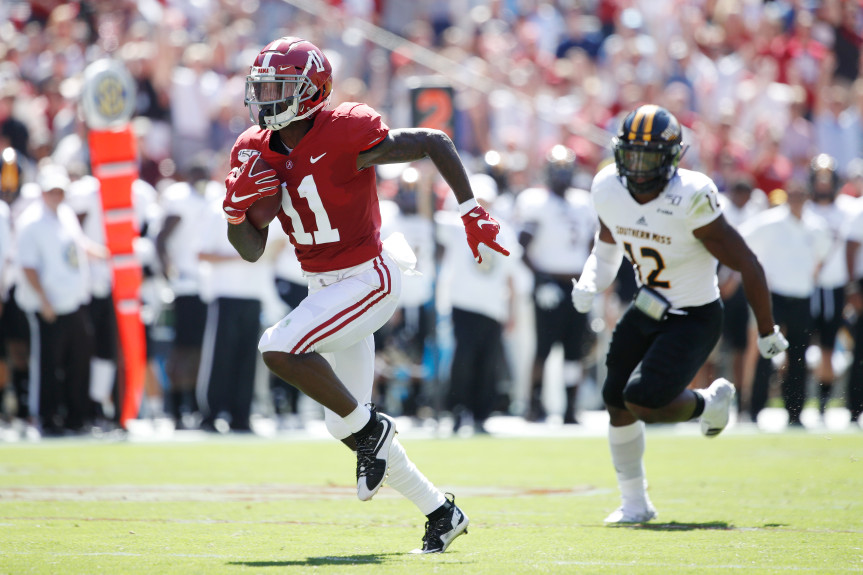 The Eagles’ season is in the rear-view mirror and representatives from the team are returning home from their week-long stay in Mobile, Ala. for the annual Senior Bowl. That said, there’s no better time to look to the future than right now with my first 7-round mock draft.

The mock draft will be done through The Draft Network’s mock draft machine. The other 31 teams will be simulated and I will act as Howie Roseman picking for the Eagles. Without further ado here are the results of my mock draft:

Ruggs is widely regarded as one of the top three receivers in the draft and likely won’t actually fall to the Eagles at pick 21. He’s a speed demon who tortured SEC defenses all year. If you liked watching Patrick Mahomes throw to Tyreek Hill for the past two years this could be a possibility if Ruggs is added to the roster.

While it’s hard to judge a player based solely on a highlight reel, it’s hard to watch his big plays and not be mesmerized. I can only imagine he and Carson Wentz tormenting defenses for the next 10 years. His speed, to me, is reminiscent of a young Desean Jackson. If Ruggs is in fact available at pick 21 the Eagles should sprint the card to the podium.

Though it seems the Eagles have a lot of options at cornerback: Rasul Douglas, Avonte Maddox, Sidney Jones and Cre’Von LeBlanc all returning with Jalen Mills possibly coming back, there are a lot more questions than answers.

I see Maddox as a slot defender, LeBlanc backing him up, Douglas doesn’t have the long speed required to play the position and Sidney Jones is hit or miss – if I were the Birds there’s no way I go into the 2020 season with that group. That’s why I look at Virginia’s Hall with the 53rd pick. Hall finished his collegiate career with 154 tackles, five interceptions and 34 passes defended. He could come in and compete for a job day one and add another weapon to new defensive backs coach Marquand Manuel’s arsenal.

The safety position is a bit of a question mark, too, entering the 2020 season. With Rodney McLeod set to become a free agent and Malcolm Jenkins refusing to play on his current contract that leaves Marcus Epps and Rudy Ford as the only two safeties returning – yuck.

While Maddox has some safety experience and Jenkins could be re-signed to a more lucrative deal the safety position needs addressed in the draft. Enter Winfield Jr: a playmaking safety from Minnesota. He’s a little undersized, listed at 5’10”, but he’s a dog. Winfield would be another toy for the Schwartz-Manuel combo.

Winfield finished last season with 62 tackles, two forced fumbles and seven interceptions. He could be a player to build around for years to come.

The Eagles nab another Golden Gopher with their fourth round pick, another wide receiver to grow with Wentz.

It wasn’t mentioned the first go-around but it’s worth noting that the Eagles finished the season with Greg Ward, JJ Arcega-Whiteside, Deontay Burnett and Rob Davis as the four receivers getting reps for the Birds offense. This is a position group that needs to be overhauled, too. That’s why with the 117th pick Johnson was added to the roster.

Johnson finished the season with 86 catches, 1,318 yards and 13 touchdowns. Ruggs would be the guy to spread the field and Johnson could be a high volume receiver.

It took five rounds but the Eagles finally addresses the defensive line. With Malik Jackson set to return alongside Fletcher Cox this season, Ohio State’s Davon Hamilton could add some much needed depth in the case of another injury to the defensive line.

Sure, Anthony Rush and Bruce Hector flashed last season, it doesn’t change the fact that the defensive line used to be a strength of this team. They could use a little more help inside.

Though a fair amount of shuffling is done along the line, especially with NASCAR packages which have Brandon Graham moving to DT, allowing Derek Barnett and one of Genard Avery, Josh Sweat or Shareef Miller to rush from the outside, but adding another body to the middle of the line alongside Cox and Jackson could give this defense a big boost.

This time the Birds address the offensive line with a tackle from Wake Forrest, Justin Herron. Halapoulivaati Vaitai and Jason Peters are both free agents, leaving Lane Johnson and Andre Dillard as the only tackles with NFL experience on the roster. Do you trust Jordan Mailata as the only back up? I didn’t think so.

An offensive lineman needed to be added and Herron was the best available option at this point in the draft. I trust that offensive line coach Jeff Stoutland could turn him into a serviceable backup, much like Big V.

With their last pick, I addressed the hole in the Eagles linebacking corps. With Nigel Bradham potentially becoming a cap casualty this offseason and Kamu Grugier-Hill’s status and a free agent, the team is left with Nate Gerry, Duke Riley, TJ Edwards and Alex Singleton on the roster.

Enter Davis-Gaither, an athletic linebacker who could fit that safety-linebacker hybrid that’s en vogue right now. He finished last season with 49 solo tackles, 104 total tackles, five sacks, 14.5 tackles for loss and one interception. He would be a welcome addition to a, relatively weak, linebacking room.