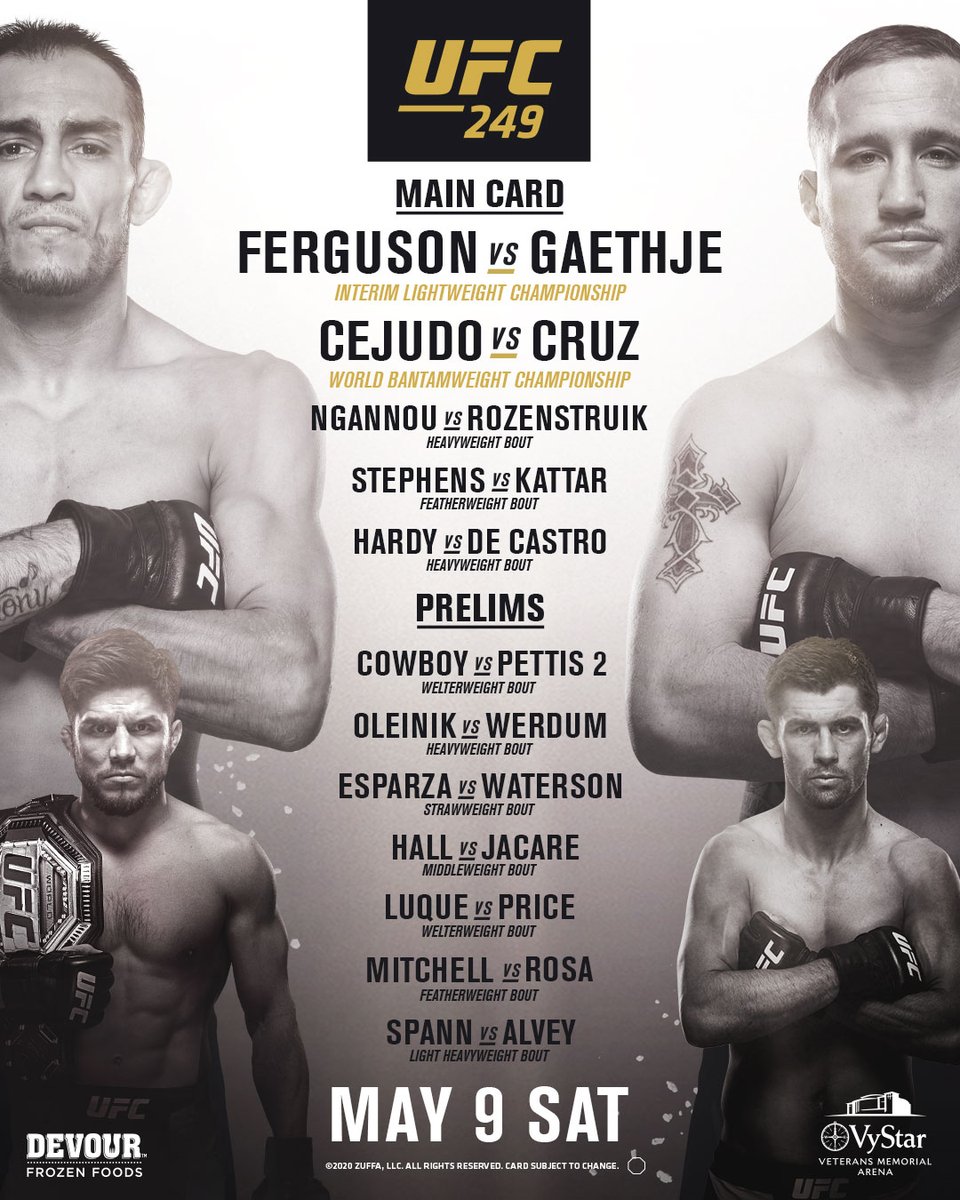 Two weeks ago, the NFL held its annual draft in a unique fashion, live but mostly done online via webcams, providing sports fans with their first live event in over a month.

This weekend, the UFC will try to play savior, much like the NFL did two weeks ago, giving folks a beacon of light in an otherwise dark time.

This Saturday, May 9, the UFC will host a live event in Jacksonville, Florida; though no live audience will be there, the fights will be available to stream on ESPN and ESPN+. And from top to bottom, this card is sure to entertain.

The preliminary fights are stacked, too. Starting at 8 p.m. on ESPN, fight fans can witness Uriah Hall and Ronaldo “Jacare” Souza square off, followed by Carla Esparza and Michelle Waterson. From there, Aleksei Oleinik and Fabricio Werdum will take the octagon, and the preliminary card will culminate with Donald Cerrone and Anthony Pettis squaring off.

After two solid hours of entertainment, the fights will switch over to ESPN+ where Greg Hardy and Yorgan de Castro will fight, followed by Jeremy Stephens and Calvin Kattar. Francis Ngannou will go head-to-head with Jairzinho Rozenstruik; the main card will end with two title fights – Henry Cejudo vs. Dominick Cruz for the Bantamweight title and Tony Ferguson vs. Justin Gaethje for the interim lightweight belt.

While UFC fights aren’t for everyone, this event is surely something to look forward to. It will attempt to give folks a sense of normalcy in the crazy world we live in. With virtually nothing to compete with sports-wise, the card will become must-watch television for anybody with an interest in sports.

For just one night, things can be close to the way they were in February before the quarantine and COVID-19 memes. Before the bell rings Saturday night, I plan on ordering from my favorite local spot (shout-out Kid Rips in Runnemede, New Jersey.) By the time the first punch is thrown, I’ll have a cold beer in my hand, bar food in my stomach, ready to take in nine premium UFC fights on TV.

If only for a few hours, life will appear to revert back to the normal state we lived in prior to COVID-19. And for that, I thank Dana White and the UFC.

Stay tuned for betting previews and more on the UFC later this week.