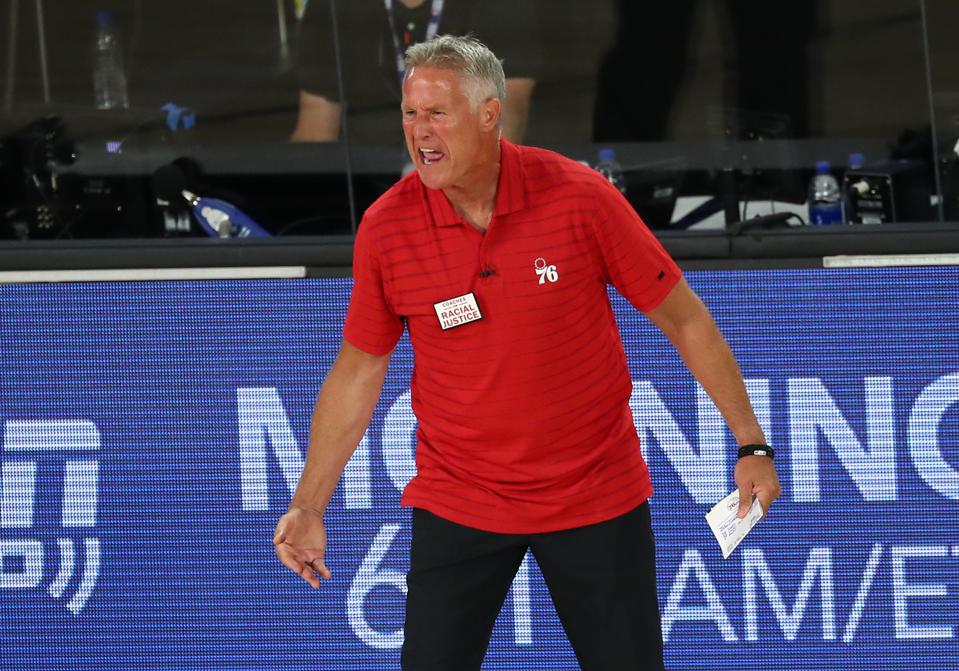 Monday, August 24, at 5 p.m., sources revealed to ESPN’s Adrian Wojnarowski reported that the Sixers relieved Brett Brown of his coaching duties after seven years of service.

Love him or hate him, Brown oversaw the team through it’s darkest days and damn near brought them to an Eastern Conference title series against the Milwaukee Bucks in 2019. After the team underperformed in the 2019-2020 season and was swept by the Boston Celtics in the first round of the playoffs it was clear that his time with the team is over. I wish him nothing but the best moving forward but this is the first step in righting the franchise.

The coaching search will begin and should be led by general manager Elton Brand, per Woj.

The franchise’s plan is that Brand will continue to oversee basketball operations, sources said, but the personnel and structure in the front office is undergoing significant evaluation and change is looming.

Here are five names Brand should keep his eye on as he begins his search for a new coach.

Lue, an assistant coach for the Los Angeles Clippers and former head coach of the Cleveland Cavaliers, could be atop the Sixers’ wish list and for good reason, there’s a lot of potential there. He coached a Cavs team, captained by LeBron James, to three NBA Finals, walking away with one ring.

In his fourth season, he started the season 0-6 and was canned. He returned to the Clippers where he is an assistant coach to Doc Rivers.

Is Lue at the top of my list? No, we’ll get to that later.

Will I be upset at the Lue hiring? Not really, I’d like to see what he can do with players like Ben Simmons and Joel Embiid. Can he give the offense the spacing it desperately needed last season? How will he perform in his second stint as a head coach? Can he be a difference maker coach like his mentor Doc Rivers? Or is he a one-trick pony who had LeBron carry him to a title?

The thing that gives me the most pause, however, is his relationship to Klutch Sports Group – will he be able to actually coach Ben Simmons instead of being his friend ala Brown? That’s the million-dollar question, in my opinion.

Wouldn’t be the worst hiring but still leaves something to be desired.

Another Doc Rivers disciple, Cassell is another former player who could make the move to a head coaching gig this off-season.

Cassell is a three-time champion, one-time all-star, and seven-year student under the aforementioned Rivers. Learning under Rivers and taking part in coaching the likes of Kawhi Leonard, Paul George, Chris Paul, and Blake Griffin could go a long way in shaping Embiid, Simmons and co. into a championship caliber team.

If you’re looking for a first-time head coach to bring in a different voice, Cassell would be a logical choice.

When the Toronto Raptors moved on from Dwayne Casey they hired an in-house candidate in Nick Nurse. It wasn’t the “sexy pick” by any stretch of the word. Since then he put the team over the hump, bringing a championship to Toronto before winning Coach of the Year this past season.

Ime Udoka could be this team’s Nick Nurse.

Udoka is another former NBA player who joined the Sixers coaching staff in June 2019 after spending eight seasons under Gregg Popovich. He’s familiar with the team and could be a welcome change in Brown’s wake.

We’re here for the clicks.

In my opinion, Wright shouldn’t leave Villanova for anything. He’s a local legend and sure-fire Pro Basketball Hall of Famer.

With that said, how cool would it be to have, arguably the best college coach in the last decade, coaching the Sixers? He’s been linked to the team per The Athletic’s Shams Charania.

Again, personally, I don’t think he makes the move. Is he likely the best pure coach out of all the names listed? Definitely. The question is, how would he perform at the professional level? Would his voice be lost among adults; is it something that only works on students like former Flyers coach Dave Hakstol? The world may never know.

The former Brooklyn Nets coach is looking for work and, in my opinion, is the best man for the Sixers job.

He coached a scrappy, over-achieving Brooklyn team that gave the Sixers a fit in the playoffs last year. Think about it, remember how much we all irrationally hated Jared Dudley of all people? Jared freaking Dudley.

Led by scorers like Caris Lavert, Spencer Dinwiddie, Joe Harris, combined with the resurrection of D’Angelo Russell; Atkinson got the absolute most out of his players, something Brett Brown hasn’t been able to do in some time.

I’d love to see what Atkinson could do with this Sixers lineup. He was slated to coach two superstars in Kyrie Irving and Kevin Durant before injuries sidelined the two of them – if given the opportunity he could create matchup nightmares with stars like Embiid, Simmons, and even Tobias Harris, for the next five years-plus.