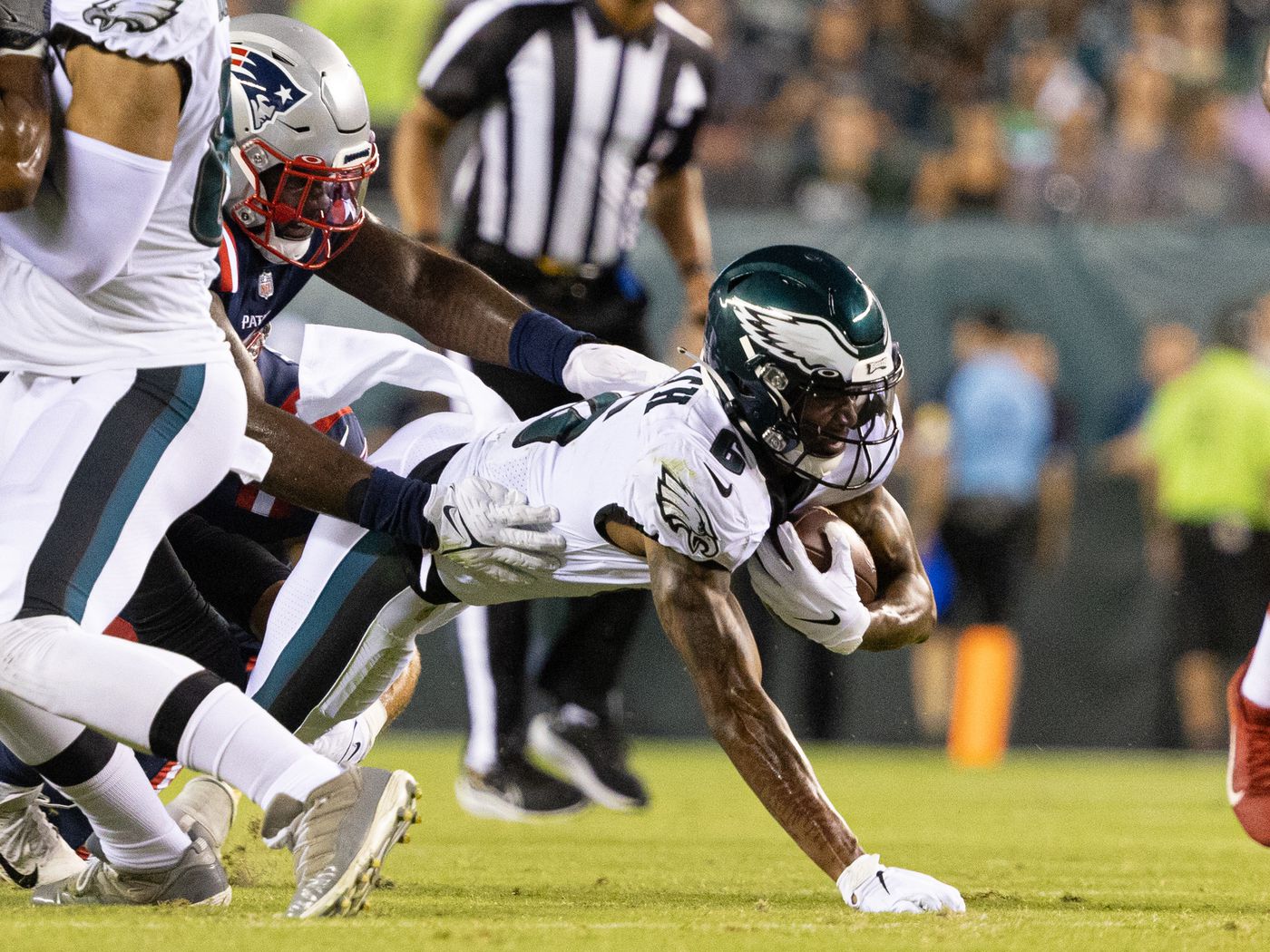 About thirty minutes before the Eagles’ blowout loss to the Patriots, the team announced that starting quarterback Jalen Hurts would miss the game. This bad news would just be the tipping point of a boring, lackluster, and frankly unwatchable night of football at the Linc. Hurts appeared to be fine during pregame warmups, but it was later revealed that he was dealing with a stomach virus.

When it comes to the game, there are not many highlights to touch on. DeVonta Smith’s first career catch, Kenny Gainwell looking the part, Alex Singleton turning into a tackling machine, and Milton Williams looking unblockable were the only serviceable parts of the eventing.

Put on the brakes, make the catch, pick up the first down.@DeVontaSmith_6 | #NEvsPHI

Joe Flacco was 10 for 17, for 83 yards, 1 INT, and 1 fumble. The fumble came on the first play of the game after a horrible snap from backup G/C Nate Herbig. Nick Mullens faired no better by going 5 of 10, for a putrid 27 yards, and 1 INT. Overall, the Eagles played mostly backups against the Patriots’ first-team offense and defense, who played a quarter. The coaches will have a hard time evaluating whatever happened on the field last night. The game was full of missed blocks, blown coverages, and several noticeable gaps in communication. Many fans who watched were left questioning the depth the Eagles have. But in an ideal world, you wouldn’t swap out and play entire backup offensive or defensive units. There were a few people, like Williams, that can be plug-and-play ready when surrounded by the Pro Bowl talent that the Eagles have on both sides of the ball, especially in the trenches.

Speaking of Pro Bowlers, tackle Lane Johnson was not happy about the offense performance when speaking on the JAKIB Media Live Postgame Show with Marc Farzetta, Derrick Gunn, and Devan Kaney.

“It’s terrible,” Johnson said. “Anytime you don’t put up anything, I don’t care what you’re doing. If you’re in the nature of competing and being in competition, that’s unacceptable. I don’t care if it’s preseason or whatnot, there’s still a standard to play at this level and represent yourself and to represent this team.”

Coach Sirianni was also asked about the offense’s performance after the game by Ed Kracz. Siranni had a few interesting things to say: In a perfect world, the Eagles will be active on the waiver wire and see if they can upgrade from Flacco. His guaranteed money however might make that a little difficult. Mullens isn’t even a conversation starter. He’s been horrible.

There are no surprises here.

Honestly, the Eagles also need to be active on the waiver wire at WR. The depth after Ward is troublesome and there are no backup receivers that can play outside. Right now Whiteside only makes the team because he’s on first-team special teams units. Travis Fulgham and John Hightower haven’t helped their odds by being pulse-free all offseason.

With Tyree Jackson likely headed to IR, last night was a chance for Jack Stoll (who got the highest guaranteed money out of all the undrafted FA rookies) to show something. He had a solid showing. I just don’t think it’s enough to push Rodgers.

In a world where Andre Dillard doesn’t get traded, he clearly takes the slot of Toth. This is questionable since by all reports he’s had the worst camp out of all of the tackles and La’Raven Clark is still on the roster. If Dickerson starts on the PUP Matt Pryor or Sua Opeta can be slotted in.

I don’t think there are any surprises here.

I think this is a scenario where the  “phantom injury IR” label comes out for Patrick Johnson or Stevens. I think both will be linked to the roster when week 1 hits.

I want the same logic for QB and WR here. The Eagles desperately need depth at the corner position. If either Slay or Nelson gets injured, Michael Jacquet will take a meaningful snap. If this happens, I’ll only accept birthday gifts in the form of Fine Wine & Good Spirits gift cards.

After Epps, Riley is the only depth safety that has shown a pulse.