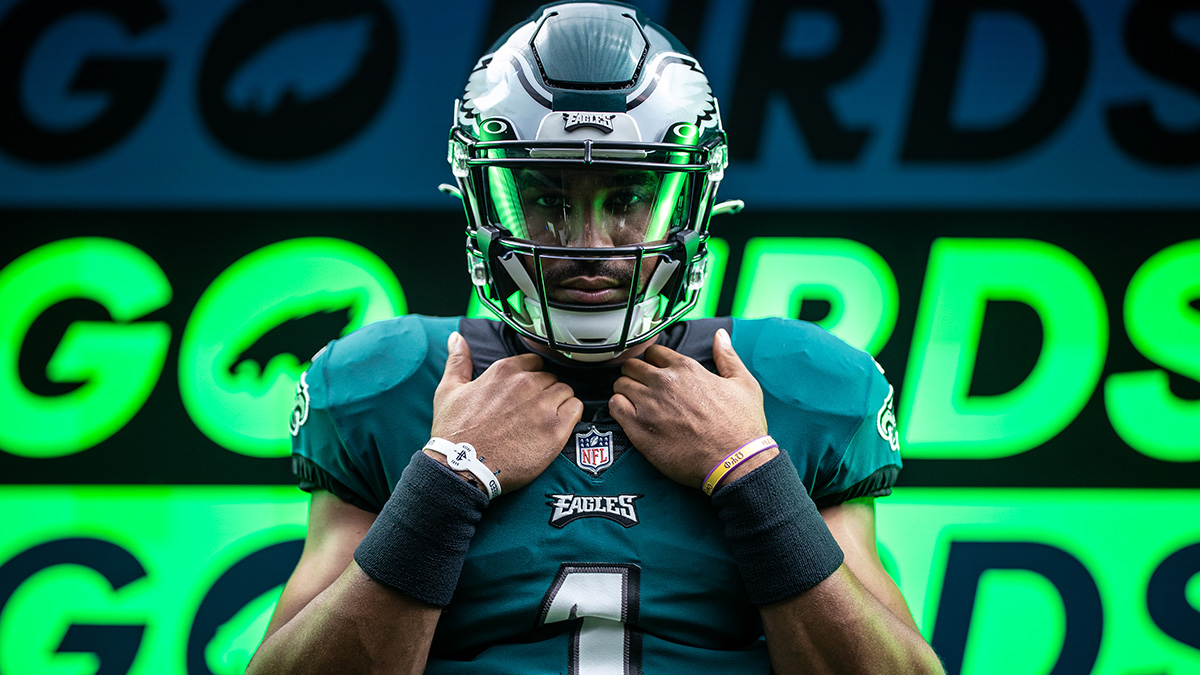 It’s that time again. We’re back with an all-new Morning Brew. What a couple of days it has been. The NFL is back and teams have reported to training camp. Jalen Hurts is having a nice start to camp. Zach Ertz has an interesting new look. The NBA Draft took place on Thursday night and yes – Ben Simmons is still a Sixer…for now. It was a wild MLB trade deadline with a lot of wheeling and dealing taking place, so let’s get right to it.

It’s back to school time for the Eagles

Nick Sirianni and Howie Roseman speak to the media at #Eagles camphttps://t.co/VeQQTuhPpb pic.twitter.com/k6iE4m2gu2

Even Zach Ertz reported to camp

What do we think about the new hair color for Ertz?

Of course people have jokes

Zach Ertz bleached his hair. Throw in an upside down cross earring and all I see is Kiefer in The Lost Boys pic.twitter.com/HSRfBti70y

Jalen Reagor is slowed by a failed conditioning test and the loss of a close friend.

More on a rough training camp start and summer for the 2d-year #Eagles WR: https://t.co/gMSHgVMa3M via @phillyinquirer

Look who is back in Green Bay

The NFL tonight sent clubs updated training camp and preseason COVID protocols, including discipline for any player — regardless of vaccination status — who refuses to wear a tracking device ($14,650) or refuses to submit to required virus testing ($50,000), per source.

We know what this answer really means

Our QB1 is better than that

Colts’ QB Carson Wentz is out indefinitely as he undergoes further testing on a foot injury that he suffered at the end of Thursday’s practice, per @MikeWellsNFL and me.

#Bills WR Cole Beasley is talking to reporters now and he starts off by reading a prepared statement. Says he’s not pro or anti-vaccine but that he’s pro-choice. Full video below: pic.twitter.com/C0O39zjaza

Did the Sixers really make a fantasy basketball like offer to the Raptors?

ESPN Sources: Sixers continue to canvass the league for Ben Simmons trades — armed with a steep asking price. Simmons and his agent, Klutch CEO Rich Paul, are in step with a move elsewhere. Draft night is always an ideal vehicle for a deal, but talks could continue into summer.

More help is on the way for LeBron James

The NBA and Former President Obama are working together

Bryce Harper hit an inside the park homerun

Jean does it all. pic.twitter.com/X9K6GYks5P

The MLB trade deadline was crazy

A devastating tornado struck down in Bensalem

Just had a tornado come through Bensalem. #tornado #besalem pic.twitter.com/CAnXEei61a

This is absolutely terrifying

A message from Faulkner Auto Group

3:30 PM: A confirmed EF3 tornado in Bucks County in the Bensalem/Trevose area with peak winds to 140 mph. The storm damage survey team mentioned the most intense damage was to car dealerships and an adjacent mobile home park. More details tonight. #pawx

Look at that sky

New Jersey wasn’t spared from the Tornados either

KDIX – Super-Res Velocity Tilt 1 6:26 PM EDT I’ve never seen a long – track, long duration tornado in NJ like this one. Whether it will be classified as 1 or two separate tornados , we are in uncharted waters here in NJ. pic.twitter.com/9Fmm4a2YaE

We can confirm an EF-0 tornado briefly touched down in Essex County, NJ yesterday evening.

Maximum winds were 65 mph and it was on the ground for less than a half mile. Several trees and large limbs were knocked down, with one home left severely damaged. #NJwx #tornado pic.twitter.com/SZ7ilLUTPt

Alaska was rocked by a huge Earthquake

A 8.2 magnitude earthquake struck off the coast of Alaska, according to preliminary data from the US Geological Survey https://t.co/YtIrwhuYmc

A Tsunami warning was then issued

Simone Biles spoke after the U.S. finished second in the team final.

She said Tuesday was “really stressful” and she had “never felt like this going into a competition.” pic.twitter.com/fVt0u0hJmN

Simone Biles’s withdrawal from Olympic events reflects a cultural shift, as some athletes put mental health above an appearance of invincibility. https://t.co/6yr4lGGeLn

Charlie Kirk, the boy with not an ounce of athleticism in his body, calls Biles weak

“We are raising a generation of weak people like Simone Biles” pic.twitter.com/yDLtblAS35

The guy who cried when they dumped a cup of water on him? pic.twitter.com/t6LTrjWDLF

And then there’s this…

Sen. Ted Cruz comes to votes in workout clothes, telling reporters they scheduled a vote “in the middle” of his basketball game pic.twitter.com/XgzsUE1hu8

Has there ever been a bigger loser than this little, little man?

DOJ notes: Trump told DOJ officials “just say that the election was corrupt + leave the rest to me”; rejected DOJ debunkings of specific claims with, “Ok fine — but what about the others?”; said, “You guys may not be following the internet the way I do.” https://t.co/PN89CXltSN

The insurrection on #January6th is not a partisan issue. It was a blatant attack on our democracy and Constitution. Our bipartisan committee will find the facts and reject those who spread the lies that fueled this attack. pic.twitter.com/FhmRJMpVcE

The events of January 6 make me sick

Vile racist slurs. Attempts to gouge out eyeballs. And Republicans who repeatedly downplay it all.

In an effort to set the record straight once and for all, law enforcement officers recounted the gruesome details of January 6th in front of the House select committee. pic.twitter.com/5Q6F6mNt00

Warning: Graphic Language. 1) Product of Trump, 2) Exacerbated by Trump, 3) Same as it Ever Was or 4) Something Else? pic.twitter.com/N7m7KFY6cW

In a long rambling answer, Jim Jordan admits he talked to Trump on January 6th. When asked what they discussed, Jordan changes the subject to the Speaker and security posture pic.twitter.com/n6sLuudNoX

Republicans say… “My body, my choice” when it comes to vaccinations but not to a woman’s reproductive rights.

Marjorie Taylor Greene, Matt Gaetz and others drowned out by protesting brass bandhttps://t.co/2hsVyMRa1J

“Are you a pedophile @mattgaetz” pic.twitter.com/5y5YJIGKAt

This is now displayed in my home county of Calvert in Southern Maryland pic.twitter.com/VRvB9e64AR

NEW: Two NYPD cops had sex with a vulnerable teen member of the police youth program, taking advantage of the underage girl to “satisfy their depraved interests,” an internal department judge has ruled.https://t.co/D4H17fBRZ5

#DeltaVariant surging in U.S. New data show Delta much more contagious than previous versions of #COVID19. Unvaccinated people: get vaccinated & mask until you do. Everyone in areas of substantial/high transmission should wear a mask, even if vaccinated. https://t.co/tt49zOEC8N

JUST IN: @GovMurphy “Strongly recommends masking in indoor settings. Our metrics are trending in the wrong direction. New data suggests the Delta vatiant is more transmissible even among vaccinated individuals, which why we are making this strong recommendation.” @FOX29philly pic.twitter.com/ljezwE7i5w

This is not good. FL is now in uncharted territory with 21.7K new cases reported today (the largest single day number of new cases). 108 new deaths. This wave is now larger than all previous waves. 10,187 hospitalized (83% of its all-time pandemic high). Time to change gears: pic.twitter.com/4wJ3PpWaJL

What in the world is going on?

The FBI is investigating reports of “a possible jetpack man in sight” 15 miles east of LAX. https://t.co/m9Qyu8gW32

Slipknot founding member Joey Jordison has died at the age of 46. The musician was the band’s former drummer for nearly two decades beginning in 1995. https://t.co/zsXP9XEOQH

I guess bathing is overrated???

Ashton Kutcher and Mila Kunis say they don’t believe in bathing their kids or themselves too much.

“If you can see the dirt on them, clean them,” Kutcher said. “Otherwise there’s no point.” https://t.co/YxzjsEuzcC

WWE has come to terms on the release of Bray Wyatt. We wish him the best in all his future endeavors. https://t.co/XIsUbaMUZ7 pic.twitter.com/koRuC3w1yr

Reaction to the Wyatt release

Serious allegations have been leveled against Evander Kane

The League was made aware this evening of a post on social media alleging that San Jose Sharks Player Evander Kane bet on NHL games. The integrity of our game is paramount and the League takes these allegations very seriously. (1/2)