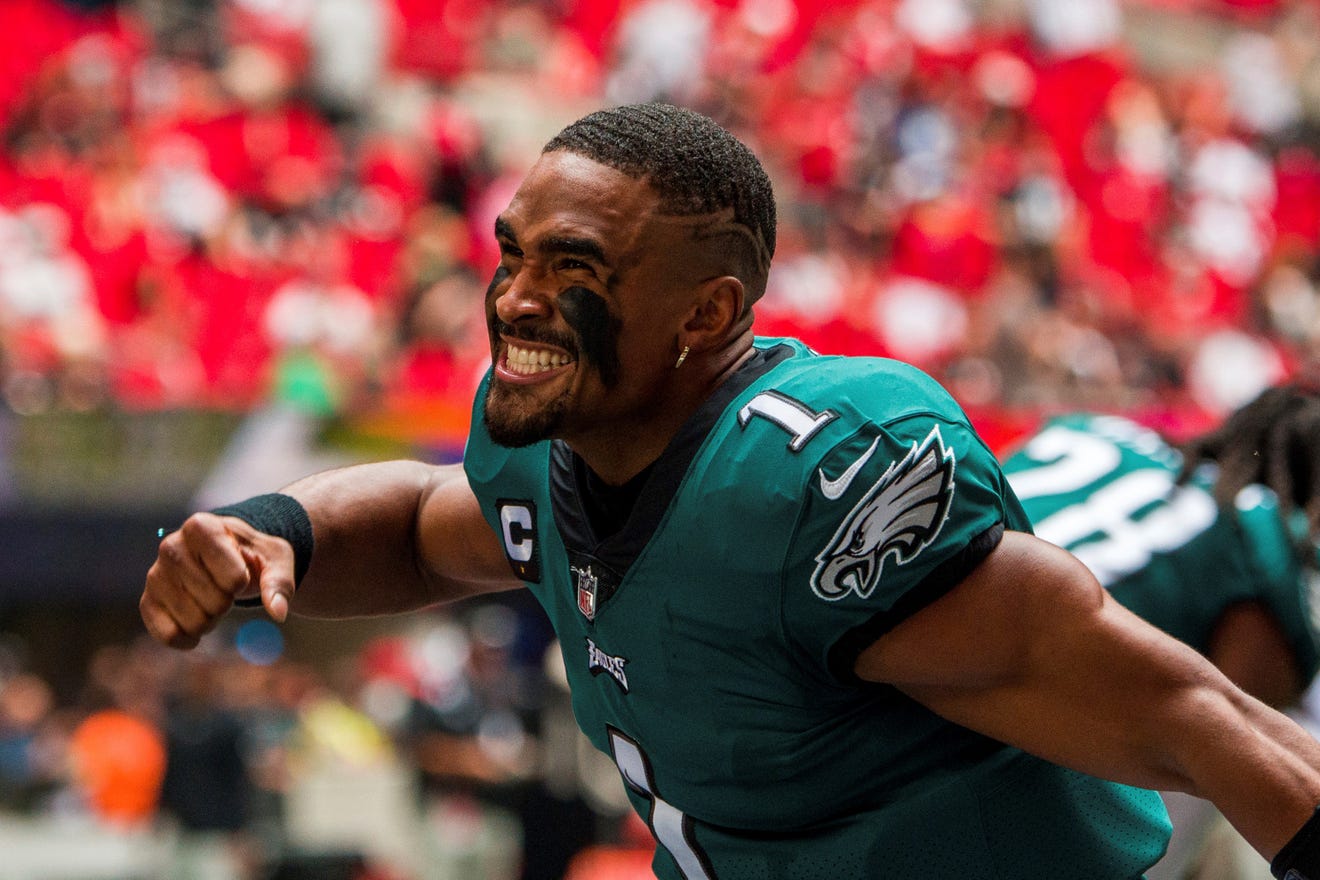 We’re back at it again with an all new Morning Brew and we’re not the only thing back. The NFL regular season has returned. The Eagles took down the Falcons in an impressive Week 1 victory where the defense and the young guns gave us a glimpse into the future with this team.  It was the anniversary of the 9/11 terror attacks that we will never forget. College football was wild this weekend. So let’s get right to it, it’s Brew time.

Victory for the good guys

WELCOME TO THE LEAGUE, DEVONTA SMITH! 🦅

Eagles strike first thanks to their 1st round pick! 🙌

Yes, the Falcons don’t look very good. But this has been a complete demolishing. Aside from some early issues vs. the run, and all the penalties, #Eagles have put forth a complete effort for Nick Sirianni’s first NFL win as head coach.

So how’d our staff and contributors do with week 1 predictions?

The site’s staff and contributors give their predictions and best bets for #PHIvsATL Week 1! #FlyEaglesFly | #DirtyBirds@CandisRMcLean@PhillyMike@TCutillo23@thepibrew@x_drumheller@TKO_Picks@BruceJVail@ChrisEbomb@lhenry019@piccone_@Sean_Bracehttps://t.co/UTkhj9ljwO

The Bucs took down the Cowboys in an epic NFL opener

Tom Brady and Dak Prescott had a showdown for the ages that came down to who had the ball last. That was the Bucs. https://t.co/TyDRegFOz8

Dak Prescott told Tom Brady after the game that the Cowboys will meet the Bucs again in the playoffs. https://t.co/7RgQGTHtt8

Chuck and Shaq keep it real

Septa wants to hear from you

After years of feedback – we’re redesigning the #wayfinding system for our rail transit network – meet SEPTA Metro and tell us what you think! See more at https://t.co/WLV2s74ywC. #ISEPTAPHILLY #waytogo pic.twitter.com/pNoaueCQXv

Not good news for Septa

SEPTA officials say they are down 83 operators for their busses and trolleys. The transportation authority is rushing to hire more drivers amid a significant shortage. https://t.co/BetYFV3Tp5

Memories from September 11, 2001, are still fresh two decades later. Here are some defining images from that day 👉 https://t.co/VOyPrB1R8B

Message from the President

We never forget the children who have grown up without parents. Parents who have suffered without children. Husbands and wives who had to find a way forward without their partners. Brothers, sisters, loved ones.

Jill and I hold you close in our hearts. pic.twitter.com/ydppFkpV4y

20 years ago, Donald Trump’s first comment to the media was to mention, after the towers came down, that a building he owned was now the tallest in lower Manhattan. pic.twitter.com/gpn1gYCJNa

The fake Patriot was busy on Saturday night

On the 20-year anniversary of the deadliest terrorist attack in American history, one of our nation’s former presidents “has signed a contract to provide commentary on a ‘gamecast’ of [a] boxing event.” https://t.co/Ar4I2ekudu

DARING 9/11 MISSION: Two fighter pilots for the Air National Guard took off on 9/11 to protect the Nation’s Capital, knowing it might be their last mission. pic.twitter.com/AAey9fOF77

Today, and every day, we remember the lives we lost and the heroes who stepped forward.

Reporter: Why force a rape or incest victim to carry a pregnancy to term?

Gov. Greg Abbott (R-TX): “It doesn’t require that at all, because obviously it provides at least 6 weeks for a person to be able to get an abortion.” pic.twitter.com/Mbx5JVHG1D

Right-Wing domestic terrorists plotting another attack on the Capitol?

An internal Capitol Police memo notes an uptick in online chatter and the potential for clashes and unrest during a September 18 right-wing rally https://t.co/3GZydFGyDO

These people are physically incapable of raising money without the culture war because they don’t have any policies that actually improve our quality of life pic.twitter.com/CjGGlEvAp1

Surely Republicans will be outraged here like they’re outraged by people on food stamps, right?

Good morning and Happy Thursday to everyone except those idiots who ignored Ivanka and Jared using their White House positions to clear $640 million, but are all “outraged” about Hunter Biden selling art.

The hypocrisy is astounding.

The Lunatics are coming to your school districts

“Every day it seems more likely that the kind of violence we saw at the national level on January 6 will be replicated in the states and cities and suburbs. Where they go one, they go all in on the bad apocalyptic conspiracy that will not die.” https://t.co/IF7IxcuyiR

Just get the damn vax already

BREAKING: President Joe Biden to mandate all employers with more than 100 workers require COVID vaccinations or weekly virus tests. The new requirements would affect as many as 100 million people. https://t.co/aouKyBx5aA

Microsoft is abandoning plans to fully reopen its headquarters and other U.S. sites early next month and won’t set a new date, for now, given uncertainty around Covid-19 https://t.co/bfUK4ERoPM

Howard Stern has a message for Anti-Vaxxers

“F*ck them, f*ck their freedom. I want my freedom to live.”

That’s how Howard Stern reacted to right-wing radio hosts who have died of Covid after preaching against vaccines. https://t.co/b3OhzW1jtX

A troubling trend for men

The number of men enrolled in college this year trails women by record highs, part of a nationwide education gap. Nobody wants to talk about it. https://t.co/RzPzSDIDPd

here is your very first look at iPhone 14https://t.co/KKEuupgB6c pic.twitter.com/8gs5LiVySC

So about that time Steve went off to college… #BluesClues25 pic.twitter.com/O8NOM2eRjy

My first for the @PhillyInquirer, An insider’s guide to 22 essential Philadelphia museums.

I talked to some curators and staff. There’s lots of history, culture, art, and of course—days you can get in for free.https://t.co/3RAyhod8XG

NEXT TUESDAY!! @JARULE vs @FATJOE live from @HuluTheaterMSG. Who you got!?

The Matrix is back

#TheMatrixResurrections trailer: Keanu Reeves is back as Neo and has amnesia https://t.co/htTFxQVbfW

“Paul Levesque, a.k.a. Triple H, underwent a successful procedure last week at Yale New Haven Hospital following a cardiac event. The episode was caused by a genetic heart issue and Paul is expected to make a full recovery.” https://t.co/daTT1SnBUz

The Beast returned to Smackdown

WHAT A REACTION FOR BROCK LESNAR! #SmackDown pic.twitter.com/XyK3rlEJf2

Trae Young pulled up to WWE show in MSG 😂😂 pic.twitter.com/FMbBFETcRs

The Miz will be on Dancing with the Stars

WWE’s The Miz confirmed for ‘Dancing with the Stars’ https://t.co/QAjdhXeJJ0 pic.twitter.com/vuG2T6jslR

Best wrestler in the world going to WWE?

Best wrestler in the world coming to the best wrestling company in the world!!! Love to see it! Gable Steveson is WWE! https://t.co/CDDttbwX8J

The Big 12 presidents and chancellors voted on Friday to accept BYU, Cincinnati, Houston and UCF into the conference.

In a statement, the Big 12 said the four schools were “approved unanimously by the eight continuing members.” https://t.co/Ti4bmewzTZ pic.twitter.com/QueGnscBf0

The most impressive part of that TD throw by Jack Coan was that he had a dislocated finger casually popped right back into place just before the play.

From holding back a laugh to the “louder” sign.