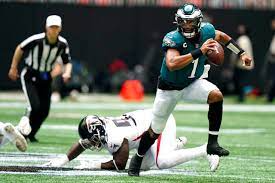 Jalen Hurts may only be in his second year as an NFL quarterback, but the former collegiate National Champion looked like a seasoned pro in Sunday’s opening day win in Atlanta.

Hurts led the Philadelphia Eagles to an impressive 32-6 win over the Atlanta Falcons, handing Nick Sirianni his first win as an NFL head coach. Sure it wasn’t against a top five defense, a super bowl contender, or even a division contender, but it was just the type of performance that many Eagles fans hoped to see out of the former Alabama and Oklahoma product.

After struggling for much consistency during the second-half of last season, Hurts looked confident and ready to go as the Eagles kicked off its 2021 season with a bang. The second-year QB only threw eight completions in the game, finishing with a 122.6 QB rating, and a perfect three touchdown passes to zero interceptions.

Hurts took what the defense gave him, over and over again. He didn’t force things, he didn’t take many long shots downfield, but he did secure the ball and that’s what helped the Eagles pick up an important win. His opening touchdown to 2021 first round draft pick DeVonta Smith, showed the trust Hurts has in his former collegiate teammate, and the youngster’s ability to make plays when the team needed it.

“It came down to seeing the coverage that we wanted,” Smith said. “We repped it a lot [in practice,] when I saw it was man, I knew that it was going to be that play.”

“I appreciate the confidence he has and shows to say that,” Hurts said about Smith. “That’s a testament to the hard work that we put in and all the effort we put into it. It’s something we worked on, we got the look we wanted, and we hit it. His first catch was a touchdown. … It’s like old times.”

Hurts did not play during the preseason, but it didn’t look like he needed reps anyway with how well he controlled the offense at Mercedes-Benz Stadium. The quarterback made smart decisions throwing the ball and also picked good times on when to run as well.

Even when the Eagles had a comfortable lead, Hurts still keep spirits high on the offensive front as the Eagles rolled to a 26-point win despite being 3.5 point underdogs before kickoff. It’s confident play from Hurts that not only helped the offense have fun, but also keep the defense playing at a high level for the full 60 minutes.

“He’s the leader,” Smith said about Hurts. “When things go wrong, he’s the guy that’s picking everybody up. When things go right, he’s the one that’s telling us to keep pushing.”

Execution is something that Hurts will continue to improve at as the Eagles aim to make it two wins out of two to start the new season. The San Francisco 49ers visit Lincoln Financial Field on Sunday, also coming off an opening day win of their own in Detroit.

San Francisco will be a tougher test than Atlanta, but another good challenge for Hurts and his young offensive weapons to gel as Tampa Bay, Dallas, Kansas City, and others await later this fall.