The Philadelphia Eagles started off Sunday’s game in Las Vegas destined to walk away with a winning result, however couldn’t sustain early momentum and eventually suffered a fifth defeat of the 2021 NFL season.

Nick Sirianni’s men lost 33-22 at Allegiant Stadium on Sunday afternoon, once again showing a glimmer of hope before seeing the wheels far off on both sides of the football. Raiders quarterback Derek Carr looked like an All-Pro, completing 31 of 34 passes for 323 yards and two touchdowns, and although he tossed one interception, it never truly hurt Las Vegas in the final score.

An eight-play, 67-yard touchdown drive by Jalen Hurts and Co helped the Eagles get on the board early, but Las Vegas eventually flexed its muscles and never trailed again after the opening drive.

Hurts finished with 236 passing yards on 18-of-34 attempts and a pair of touchdowns, but was only 5-for-10 for 62 yards in the first half. The Eagles also saw a promising drive lead to the one-yard line in the third quarter, but a fumbled snap that hit guard Jack Driscoll killed the momentum and saw Las Vegas continue to add to its lead.
Despite Lane Johnson returning to his traditional right tackle spot, the Eagles lost running back Miles Sanders to injury and only totaled 74 rushing yards between their three tailbacks as a whole. The Eagles will hope for better success next week against the winless Detroit Lions, but can’t expect the Lions to lay down for them at Ford Field. 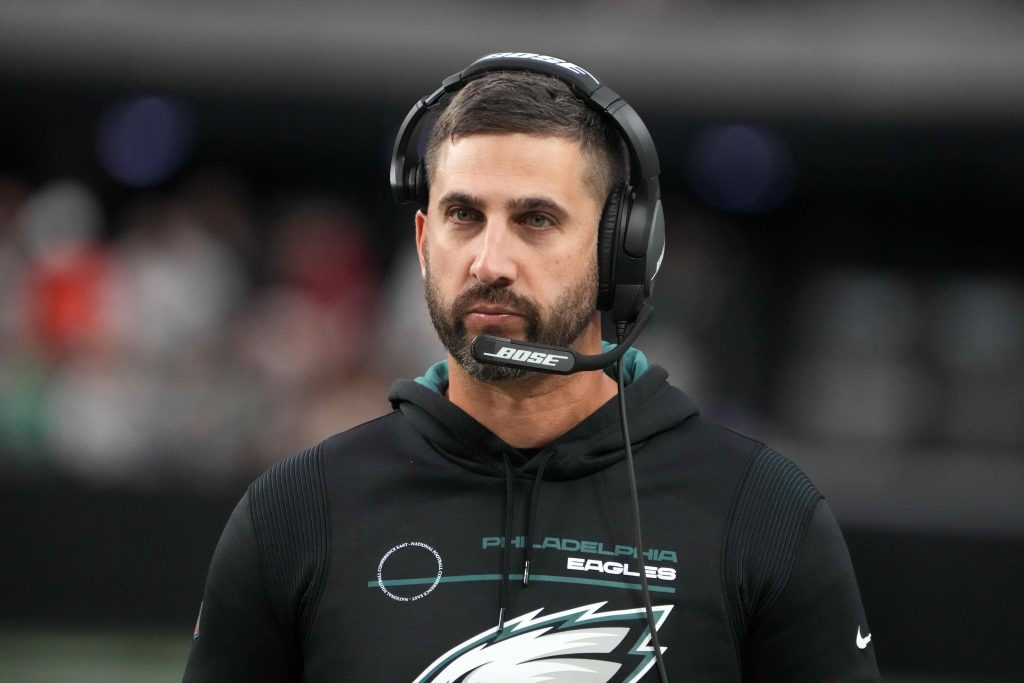 “Time is running out. We’re at a point in the season where we’re 2-5,” said safety Rodney McLeod. “Of course, we didn’t want to be in this position but honestly time is running out and we have to make a stand and we have to make a push. It was just in my heart to say that and I know that at the end of the day we’re going to come back and we’re going to respond the way we should.”

The Eagles will certainly be favorites on the road next week, but need to find some type of balance on the offensive side of the ball. Sanders’ availability remains unknown with six days until gameday, meaning rookie Kenny Gainwell could see increased playing time along with Boston Scott.

Jonathan Gannon’s defense will need to pressure Lions quarterback Jared Goff in some way to avoid a repeat performance on Sunday’s loss in Vegas. Goff almost led the Lions to a shocking road win on Sunday over his former team, the Los Angeles Rams, while second-year tailback DeAndre Swift also played a key role with over 100 all-purpose yards.

The Eagles have the talent to walk away with their third win of the season in Week 8, but need to show the same life that led to victories over Atlanta and Carolina. If not, it will be another disappointment with more than half of the season left to play.