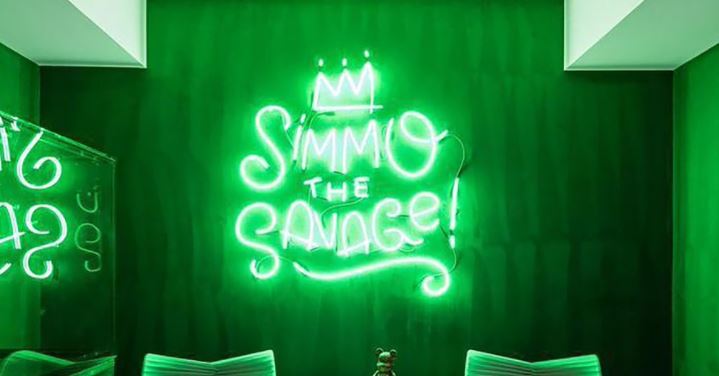 It’s that time again. We’re back with an all new Morning Brew. The annual WWE visit to Saudi Arabia for Crown Jewel took place on Thursday in what might’ve been the best WWE PPV this year to date. Brock Lesnar snapped on Smackdown. The Sixers vs Ben Simmons saga took another turn this week as  “Simmo the Savage” and Daryl Morey both drew lines in the sand. The enemy has made it to the World Series. Penn State proved just how bad the NCAA’s new overtime rule is. So let’s get right to it, it’s Brew time.

Ben Simmons is a Coward. Change my mind.

Rivers then told Simmons he should go home, and Simmons dropped the ball and left.

Jason Kelce gets it

This ain’t the babysitter’s club

“Our job is not to babysit somebody.”

Joel Embiid was honest about how he feels about the Ben Simmons situation.

All this instead of working hard

“Simmo the Savage” in green neon in Ben Simmons Moorestown home, just listed for sale this afternoon for $5M. Ben Simmons house just a yard over from next street where Terrell Owens lived when he was sent home from training camp&then worked out in front of media @FOX29philly pic.twitter.com/MTUaRfmqDP

Daryl Morey, in a Philadelphia radio interview, confirming what’s been widely believed: He will not be pressured into trading Ben Simmons. “People should buckle in,” Morey said. “This is going to go a long time.”

I’m top of the list that hopes Ben Simmons turns the corner and succeeds wherever he ends up, but I can’t help but be impressed with this scout from 2016 (via @jamie_staib) pic.twitter.com/R3tXrC5Q3W

“Thank you for supporting us and our teammate Ben because he’s still our brother.”

Without Simmons, the Sixers get the W in the home opener

And then we returned to reality…

Sixers fall 114-109 to the Brooklyn Nets after late collapse in their home opener https://t.co/K6IbJ8zUBs

Another big fat loss for the Eagles

A touchdown for the good guy

The Eagles really could’ve use a guy like Zach Ertz today pic.twitter.com/1HYSZkC1x3

This ones for you, Eagles pic.twitter.com/208ZHXQbPZ

How’d we do with our Eagles picks this week?

Someone is in a bad mood

When @BrockLesnar was leaving Saudi Arabia, Brock was quoted saying, “The moment I arrive at SmackDown, I will beat Roman Reigns senseless.”

Lesnar delivered on Smackdown as promised

And then was promptly suspended

.@BrockLesnar has been suspended indefinitely following a chaotic melee on #SmackDown. https://t.co/v6PfUKHGxS

Back to Crown Jewel, this entrance was so good

Goldberg damn near broke him in half

Goldberg spears Lashley off the stage and gets the pinfall win. #WWECrownJewel pic.twitter.com/VbikTHd1lI

Hell in a Cell

All hail the King and Queen

How it started. How it’s going. pic.twitter.com/VAXdxyCOsI

In this week’s episode of “what is Bryan Alvarez crying about now?”

The performers should have known there was no way for poor Vince McMahon to avoid a situation like this, perhaps they would have been more understanding. https://t.co/WBiDNZk70l

Former U.S. President Donald Trump will launch his own social media app, TRUTH Social, that he said would ‘stand up to Big Tech’ companies such as Twitter and Facebook that have barred him from their platforms https://t.co/U0QQlqRJZe pic.twitter.com/ZH33MTHsjT

Judging by history, I’m sure they’ll sue if you say anything bad about them

Don the Con’s sidekick has some problems on his plate

BREAKING: The House has adopted the bipartisan H.Res.730, finding Stephen K. Bannon in contempt of Congress for failure to comply with a Congressional subpoena. The Speaker of the House will send the report to the Department of Justice for prosecution.

Get this dirt ball

Listen to Steve Bannon talking about #January6th. The American people deserve to hear his testimony. pic.twitter.com/JDnotq5eDr

This isn’t suspicious at all

“Rep. Jim Banks abused his power as a sitting member of Congress to undermine the 1/6 investigation.

His behavior is not only corrupt. It should be criminal.”https://t.co/8xPn7dwt3G via @politicususa

“Anti-Cancel Culture” want to cancel your rights to vote

I bet your MeeMaw is familiar with all of these “wars”

Everything Fox News has said there’s been a war on pic.twitter.com/x6zU2hyNW2

Who is going to free us from morons like Candace Owens?

Former US Secretary of State Colin Powell died this morning from complications from covid, his family said on Facebook.

He was 84 years old. pic.twitter.com/8St2JfjBD0

So Brian Laundrie’s body shows up the day his parents start searching? pic.twitter.com/TaUw6CIHiL

What did the parents know?

SEPTA workers could go on strike, virtually shutting down public transportation in Philadelphia, if labor negotiators don’t reach an agreement by the end of the month. https://t.co/F8EEGkLlYU

The new Scream movie is coming out in January

Neve Campbell, Courteney Cox, and David Arquette return to their iconic roles alongside a host of newcomers in the brand new trailer for Scream, coming to theaters January 13, 2022. pic.twitter.com/pAcL3Ehme1

Alec Baldwin discharged a prop firearm on the set of “Rust,” a Western he was making in New Mexico, killing the film’s director of photography and wounding the movie’s director, the authorities said. https://t.co/iFRCvt6mUp

For the first time since 1999, the @Braves are in the World Series! pic.twitter.com/j1TZ5vl3VS

The World Series is set

The 2021 World Series is set 🏆 pic.twitter.com/j0C5gXIVPX

Thanks for being cheap, Phillies

The Phillies and Braves were in similar spots at the trade deadline. One was aggressive and creative and the other wanted to stay under the luxury tax.

And that’s why each team is where they are now

She was a sophomore when the game started. pic.twitter.com/AkVB8DcSMU

The first loss for Oklahoma State

Iowa State hands No. 8 Oklahoma State its first loss of the season.

The Cyclones now have four Top-10 wins with Matt Campbell as head coach.

Oregon DE and potential No. 1 pick Kayvon Thibodeaux casually dropped an f-bomb in his postgame interview.

Finished the game with 2 sacks, 9 tackles, 4.5 tackles for loss and a forced fumble. Beast. pic.twitter.com/EbGCaG1f9g

An absolute PISS MISSILE from Araiza.. this dude is a STALLION #ForTheBrand pic.twitter.com/isMSttOrix

On my way to Orlando for tonight’s @AEW Dynamite.

Feeling great and ready to attack.

Thanks for the support from so many. 🙏🤠 pic.twitter.com/51PRET5Mgo

I’m here for all of this

LeBron setting the defensive tone to start the second half pic.twitter.com/vsKbjIcj97

For a great cause

I was able to catch up with @Lisaertz4My from @ErtzFoundation. They are leading the charge on a huge renovation in North Philly, called the “House of hope.”

We need more places like this in #Philly ❤️
Please press play & hear how you can help: https://t.co/9GF0cH3VCX pic.twitter.com/iVVj8Mu4HY

I’ll leave you with this gem