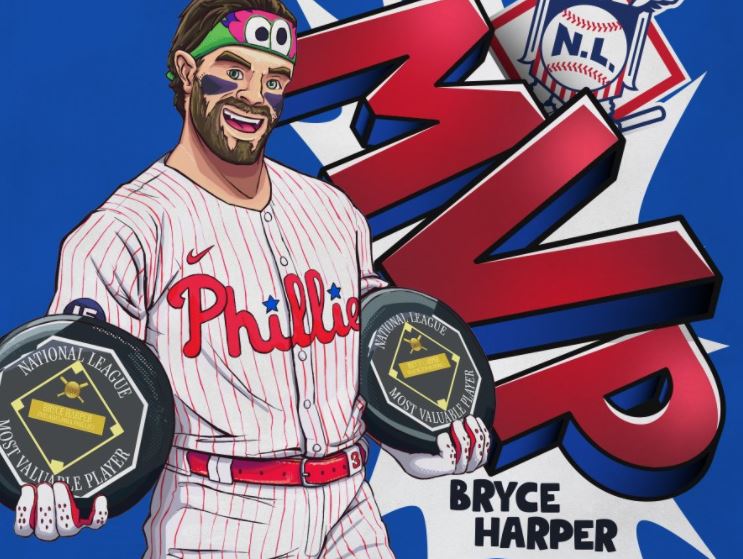 We’re back at it with an all new Morning Brew. Turkey day is rapidly approaching, but a lot has happened recently that we need to review. The Eagles won again on Sunday as they beat the Saints. Bryce Harper won the National league MVP. WWE Survivor Series took place last night. The Kyle Rittenhouse case once again proves the American justice system is broken. Let’s not keep you waiting any longer. It’s Brew time.

Eagles take down the Saints

THERE’S A REASON WHY THEY CALL HIM BIG PLAY#NOvsPHI | #FlyEaglesFly pic.twitter.com/GAEnuFSOoC

Jalen Hurts had another solid performance this week

Eagles 50 rushing attempts is their Most in 24 years

The Birds have had 39+ rushes in 4 straight games

It is amazing how they shifted and committed to the run in a big time way. They are completely dominating in the run game
pic.twitter.com/ZvyImqoGGv

Kelce laying down the law

.@KevinHart4real really stopped mid-promo to boo the Saints as they ran on the field 🤣 pic.twitter.com/JuQS1dDNG4

Jonathan Taylor had himself a monster day

“I’m just overwhelmed for sure”@bryceharper3 is excited to bring the NL MVP back to the City of Brotherly Love!@Phillies I #MV3 pic.twitter.com/PrPdn0whvb

It was a great season for Harper

Bryce Harper adds another MVP to his trophy case 🏆 @BRWalkoff

EXTRA EXTRA READ ALL ABOUT IT🗞

The return of the old Phanatic?

The old Phanatic is now the new Phanatic. https://t.co/TzAbFCIXjO

Schwarber to the Phillies?

Phillies were my pick for Schwarber, though Red Sox are seen as the favorite (Waltham’s Own! sort of), and many others in. Here’s a free that makes sense @AudacySports https://t.co/EH5Z142nI6

The Angels bolster their staff with the highest-upside arm on the market — and pay a heavy price, plus a second-rounder.

Verlander back in Houston

Justin Verlander is re-signing with the Houston Astros, per @BenVerlander 🚨 pic.twitter.com/BNjdFAfE04

Eduardo Rodriguez to the Tigers

Eduardo Rodriguez and the Detroit Tigers have agreed on 5-year contract worth $77-$80 million, per @JeffPassan pic.twitter.com/LIFalRNwka

The @BlueJays have signed José Berríos to a 7-year, $131M extension, per @bnicholsonsmith and @ShiDavidi. ✍️💰

We can’t go a week without hearing about Ben Simmons

.@sam_amick on Sixers holding out for an ~All-Star caliber player:

“There’s an internal belief that a fair amount of them — let’s say five to 10 — could become available in the next year or two.”

“This is like a multi-year thing,” a Sixers source said.https://t.co/aUV0ejCtvJ

Things got real between the Lakers and Pistons

FIGHT AT THE LAKERS GAME

In the City of Brotherly Love, Kevin Hayes lights the lamp in his 2021-22 home debut. #CGYvsPHI | #BringItToBroad pic.twitter.com/lPYKrir9kr

The Head of the Table takes out Big E

This is a real deal gift from @TheRock. 🤯

Seth Rollins was the sole survivor for team RAW

Big Time Becks with the W over Charlotte Flair

Becky Lynch crying backstage after her match with Charlotte.

Man this is real stuff. pic.twitter.com/eTxl28tlo9

RKO out of nowhere!

Pat McAfee is a national treasure

YOU SON OF A BITCH #SURVIVORSERIES pic.twitter.com/3OFOBYZXPW

Bianca Belair wins it for the Raw women’s team

Another week, another set of WWE releases

Missed opportunity to serve a grossly underserved audience (Black people). And when they wonder why they can’t engage the youth like they used to, remember moves like this as why. https://t.co/F9iv8e0kGC

The piece of trash vigilante gets away with murder

BREAKING: A jury acquitted Kyle Rittenhouse of all charges in the shooting deaths of two men and wounding of a third at a Wisconsin protest against racial injustice last year. The case intensified debate over vigilantism, policing and guns. https://t.co/QA8PQW23Cj

The judge banned MSNBC from the courthouse but allowed Tucker Carlson into a secure area to film a documentary about Kyle Rittenhouse. pic.twitter.com/DUXoDS9tOu

Guess who gets the first interview with Sh#ttenhouse?

Tucker Carlson made this documentary about Kyle Rittenhouse. It releases in December. pic.twitter.com/hqpH7rai93

Acosta: Now that 2021 is coming to an end, we decided to recognize you as our first ever bullshit factory employee of the year. That’s right Tucker, you’ve earned it pic.twitter.com/Mr2MtZ5NEe

As it relates to our justice system, it’s said that it’s better to be a guilty, rich person in America than a poor, innocent one. It’s also clear it’s better to be a white vigilante with an AR-15 than an innocent black citizen with a mobile phone or bag of skittles. Travesty.

The Republican party ladies and gentlemen

Acquitted on ALL COUNTS!

The fact we’re not surprised by the Kyle Rittenhouse decision shows how broken the system is.

Trayvon Martin: 17 years old. Killed no one. Murdered by a man hell bent on being a vigilante.

This whole thing is a joke

it’s lucky for Kyle Rittenhouse that he was just a bloodthirsty white teenager crossing state lines to literally commit murder, and not, for example, a black man selling loose cigarettes on a street corner, because there are serious consequences for that

Guaranteed…this is not the last we’ll be hearing about Kyle Rittenhouse. Nothing but trouble!pic.twitter.com/QZkqQZptWy

Alex Jones is a scumbag

JUST IN: Jacob Chansley, the self-proclaimed “QAnon Shaman,” was sentenced to more than three years in prison for his role in the Jan. 6 Capitol riot https://t.co/lxOmGgj7TW

The tree puncher Madison Cawthorn shows off his trashy habits

Dipping tobacco can cause cancers of the mouth, throat, and tongue, as well as pancreatic and esophageal cancer.

I wouldn’t wish cancer upon @CawthornforNC, but he’s doing this to himself in full view of the American public.pic.twitter.com/6DQOYlZdnl

When is this nonsense going to stop?

JUST IN: Five people, age 14 to 17, have been taken to a hospital after a shooting in Aurora, Colorado, police say. The suspect is at large. https://t.co/g6i0c1Uiws

‘Sesame Street’ is debuting its first Asian American muppet. Ji-Young is Korean American and likes rocking out on her electric guitar and skateboarding https://t.co/7AjJsuR7an

These people are truly beyond saving. pic.twitter.com/UdT4eDHxL6

True conservatism in America is dead

Over 100,000 drug overdose deaths were reported in the U.S. during a 12-month period ending April 2021, data from the CDC shows https://t.co/SpDxcF2ZbU

Two of the men convicted of assassinating Malcolm X at the Audubon Ballroom in Harlem in 1965 have now been exonerated after a 22-month investigation conducted by the Manhattan DA’s office and lawyers for the two men — Muhammad Aziz and Khalil Islam.https://t.co/yl9Ii8rGGr

BREAKING: Oklahoma governor commutes the death sentence of Julius Jones on the day of his scheduled execution to life without possibility of parole. Jones has proclaimed his innocence for more than two decades in a 1999 killing. https://t.co/Jj9dJ1Dyp0

Beef = squashed 🤝 So does this mean we’re getting a collab in the future? 👀 @Drake @kanyewest https://t.co/EBAPg3QyDc

PICTURES: Kim Kardashian and Pete Davidson’s romance is officially on!

Young Dolph was shot and killed in his hometown of Memphis, TN. https://t.co/amWez0GN7t

Cold weather can cause ‘winter vagina’ – and it’s bad news for your sex life https://t.co/JdqLLnzLGS

The rumors are true — Microsoft is releasing part of “Halo Infinite” on Monday, weeks earlier than scheduled as part of an Xbox 20th anniversary event.

My latest on how the new game could boost the Halo brand and MSFT’s game division: https://t.co/Boi9jcGOXM

We started getting visitors… from every universe. Watch the official trailer for #SpiderManNoWayHome, exclusively in movie theaters December 17.

This is absolutely disturbing

More on the incident

The attackers in the video can be seen punching, beating, knocking over, and kicking a teen girl. A SEPTA spokesperson called the incident “violent and disturbing” https://t.co/Ty8bRqhjml

TRIGGER WARNING: 🚨DISTURBING VIDEO🚨A viewer sent in horrifying video the moment a red SUV plowed through a crowd during the #Waukesha Holiday Parade. Its currently unclear how many people have been injured. Updates to come on @tmj4 pic.twitter.com/u6q10VgTJ1

Breaking News: The driver of an SUV plowed into a holiday parade in Waukesha, Wisconsin, on Sunday, leaving several people injured, according to an eyewitness. https://t.co/ZkxNYlfVCo

The Ducks go down hard

UTAH 78-YARD PUNT RETURN TO END THE HALF 🤯

The Bearcats are STILL undefeated 🔥 pic.twitter.com/6eiLwMGUUz

Man U manager is done