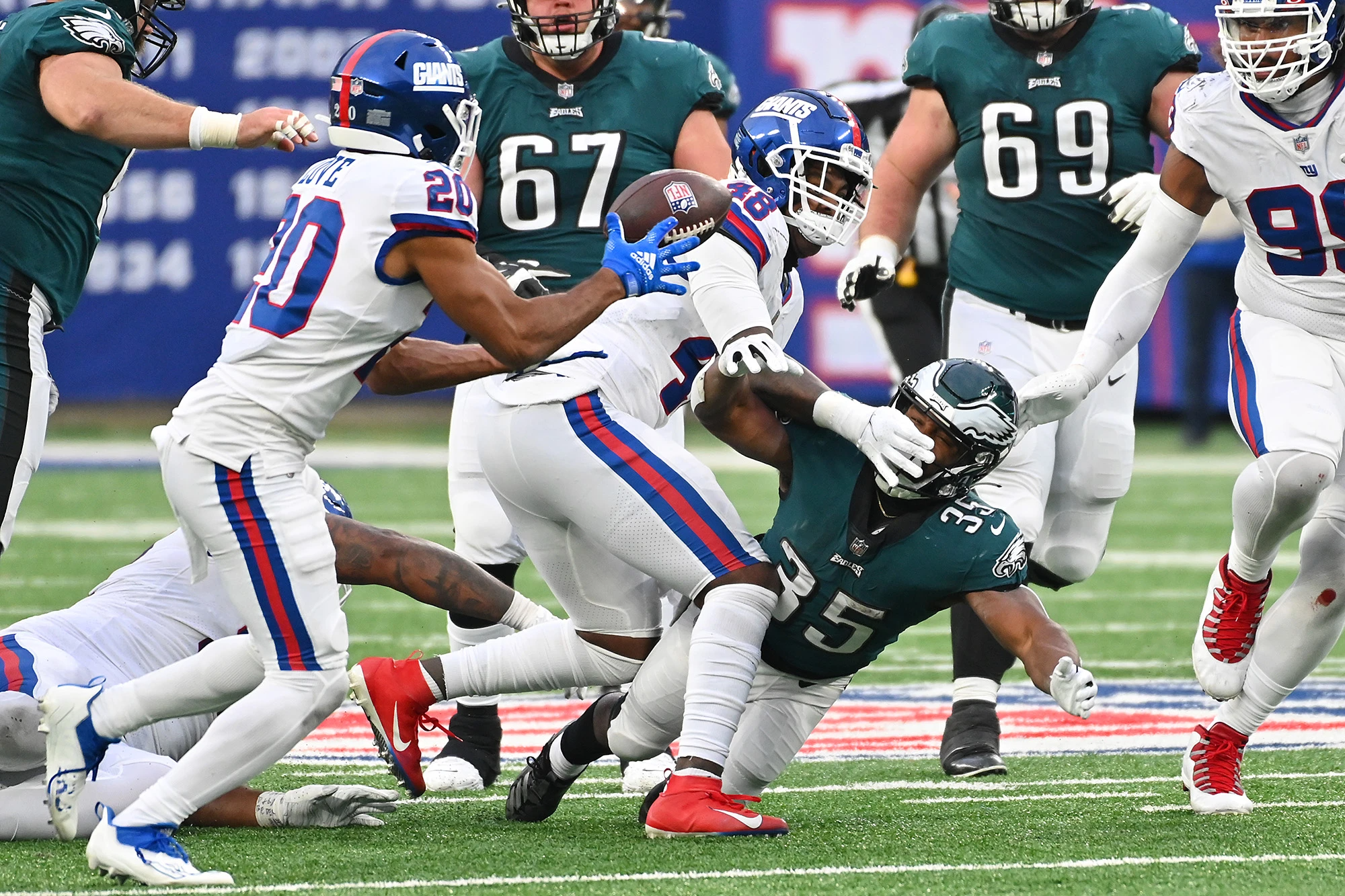 The Eagles took care of business on Tuesday night against the Washington Football Team. Can they keep their playoff push alive this week against the Giants?

The Eagles have extra motivation this week to beat the LOLGIANTS. Not only did they lose to them 3 weeks ago in a terrible game all around, they have a chance to contribute to the New Jersey A team taking over the B team for the worst record over the last 5 seasons (if the Jets beat the Jags).

The LOLGIANTS are a joke. I cannot imagine any players like Joe Judge (not a Philly guy). Gettleman is a dinosaur and doesn’t understand the concept of draft value. 5 consecutive seasons of at least 10 losses. The line keeps jumping up, from 8.5 to 10 now that Jake Fromm is starting.

The Eagles look to be without their Head Coach Nick Sirianni this week against the Giants. The last time these teams played Jalen Hurts had one of his worst performances of the year throwing the ball throwing for 129 passing yards and three interceptions. The Eagles didn’t do any favors for Hurts that game calling on him to throw a lot at the beginning of the game. I don’t see that happening here. It seems that this coaching staff learns from their mistakes and should establish the run attack early. A friendly reminder that the Giants run defense is horrible with the 28th defensive rush DVOA ranking in the NFL. This whole Giants team on offense is a hot mess with tons of key players on the IR list. This line is currently at -10 after losing as an outright favorite in East Rutherford. The Books made this line high for a reason. The Eagles are still in a spot to control their destiny getting into the playoffs and I don’t expect them to take their foot off the gas pedal. Getting 10 points in this spot with the Giants might seem enticing, but the books are telling me this game will not be close. I expect the Eagles to dominate on offense this game not just on the ground, but also with the passing game this go around. Hurts will have a great bounce-back game to remind the Eagles faithful that there is no QB controversy this year.

This is going to be a quick prediction. Eagles are rolling now and the Giants are a sinking ship. I’m glad to see reports of the Giants listening to the eagles fight song at practice because they’re gonna be hearing it a lot Sunday.

The Eagles will be full of confidence heading into Sunday’s showdown with the Giants, especially after coming back to defeat the Washington Football Team on Tuesday. I fully back the Eagles to come out swinging in Sunday’s home game, even on short rest. The Eagles will try to exact revenge against the Giants and stay alive in the Wild Card race, which I think they do with ease.

The Eagles are the better team with the better group of weapons. Jalen Hurts is back and making things happen while Miles Sanders and the rushing game continues to shine. The Eagles defense will likely go up against Jake Fromm as the backup fills in for Daniel Jones, another advantage on the home team’s favor. This shouldn’t be close at all, even if it is a division showdown. Roll with the Birds to score early and cover the spread of -10.

Coach Sirianni has come down with the Rona and will miss the game against the Giants. Regardless, the Eagles found a way to get things done against WFT the other day, despite a terrible start and the Birds will need another one of those gritty performances this week to get a W over the Giants. The Giants suck, but as they proved against the Eagles two weeks ago, these division matchups are dangerous. The Giants are playing to be spoilers. The Eagles are playing to fight for their playoff lives. Somehow I think the Birds pull out a W in a slugfest.

Eagles +10 on DraftKings Sportsbook? I dunno, man. They’ve struggled with the Giants in recent history, even in wins. However, since the schedule is favorable, it’s probably giving Nick Sirianni (get better soon) extra confidence in his offense. The offense never looks good the entire game, but they seem to come around when they have to, even making close games in losses.

It’ll be hard for me to pick against the Birds this week, but if they lose, it’s over.

This team is on a historical run, running the football! 7 straight games with 175+ rushing yards & on Sunday, that number needs to improve to 8 games. The Giants don’t have a QB & this one will be ugly.