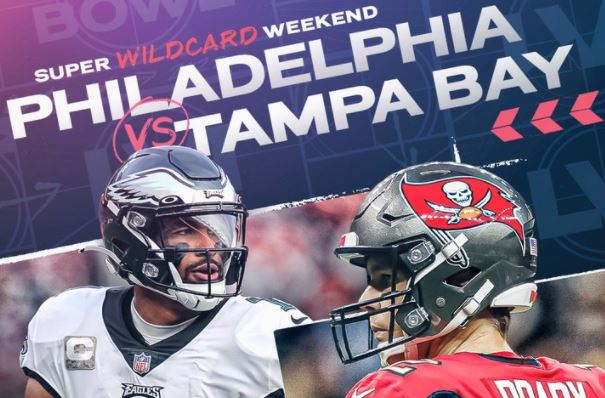 The Eagles go down to Tampa this week to try to take out Tom Brady and the Bucs in Super Wild Card Weekend. Can the Birds pull the upset or are we going to suffer another excruciating playoff loss?

All of these playoff predictions are probably stating the obvious..the Eagles are the best at running the ball, and the Bucs are very good at stopping the run. If the Birds can run the ball effectively and extend drives, keeping the ball out of Brady’s hands, they might have a chance in this game. They cannot turn the ball over and I’d go in again with the attitude of “Never punt.” The Buccaneer ship seems to be taking on water and the Eagles are much different team than when they faced each other in October, but is it enough?

I really can sell myself on either side of this story. On the one hand, the Eagles (excluding last week’s backup game) have been one of the hotter teams in football the second half of the season and are healthy, while Tampa Bay is very injury ridden. But the other side that the Eagles haven’t beaten a single team that made the playoffs this season (0-5) and that they are playing Tom Brady in the playoffs has me a little pessimistic. Regardless of what happens it’s been a great season.

We have arrived at the improbable. The Eagles are in the playoffs. Jalen Hurts leads our birds into rainy Tampa to square off against defending super bowl champs Tom Brady and the Bucs. The way I see this matchup is purely from a learning perspective. There’s a reason why the Eagles are the second biggest underdogs this weekend (Also remember – the Eagles are 0-6 against playoff teams this year).
I think Nick Sirianni’s coaching staff and the young core of players pick up some valuable playoff experience Sunday and that bodes well for this teams future.

We’ll have an ugly start to the game for both teams, especially with the pending weather forecast of wind and rain. I think our Birds can keep it close early so I think there’s real value for the Birds to cover +6 on the first half spread. Ultimately though, Tom Brady’s experience and the fact that Tampa just has a much better roster finally takes shape in the second half.

As much as I want to see the Eagles eliminate Tom Brady from the playoffs, I think the hosts will edge them to a spot in the next round. Tampa Bay is getting some key pieces back on its roster and I think will have the final say in what should be a competitive game. Jalen Hurts and the Eagles offense will be consistent in what they do on Sunday afternoon, but Tampa Bay will have a little too much to handle.

As much as people think Tampa Bay will steamroll the Eagles at home, I think it will be a lot closer in the final score. Jonathan Gannon has seen his defense improve over the second half of the season, even if you throw away the meaningless Week 18 loss to Dallas. The Eagles will stay close in this game, but again I think TB has more playmakers to work with than Jalen Hurts.

The Birds somehow figured things out and turned the ship around this season. This week they head down to Tampa in Super Wild Card Weekend to do battle with Tom Brady and the Bucs. This Bucs team is not the same as it was last year in their Super Bowl run, but any team with Tom Brady will be tough to beat. This week will be no different. The Birds need to do what got them here. They need to run the ball with a balanced attack on offense and they need Jalen Hurts to play poised.

I think the Birds D can cause some havoc. The Eagles are not the same team they were earlier this season when they lost to the Bucs at home. I’m battling head vs heart with this one because the Eagles have a chance, but they need to limit turnovers and not give Brady too many chances to beat them. This will come down to the wire. The weather could play a factor in this one with rain and wind. I’m going with the upset. Go Birds!

Whoever truly thinks the Birds will win this thinks they’re the Jeffrey Lurie of the room. They think they’re smarter than everyone else just so they can say either, “I told you so,” or, “Hey, they played the GOAT.” I don’t think the Eagles have a shot at winning this.

But I do get 2001 NFC Championship vs. the Rams vibes from this match-up. We weren’t sure of the Eagles’ ceiling back then, and we’re sure as hell not sure of it now, especially with a second-year quarterback and first-year head coach. But I do think the Eagles make this a competitive game, much like they did against the Rams in 2001 (and they had the lead at halftime), but I think those halftime adjustments that have aided Brady all so often during his career will be too much for Jonathan Gannon to handle. As far as Jalen Hurts goes, this could be the type of game where he looks great in defeat. Let’s see how that ankle is.

EAGLES & BUCS FOR A CHANCE TO GO TO GREEN BAY IN JANUARY! Of course we all want that! There are plenty of reasons why I think the Eagles will keep this close for the first 3 quarters, but the issue I’m struggling with is who is making the plays in the 4th quarter. DaVonte Smith is great, but young. Dallas Goedert is a decent option when he can catches the ball & the rest of the receivers are tough to get excited over. I think Tampa pulls away in the 4th & win by 10.