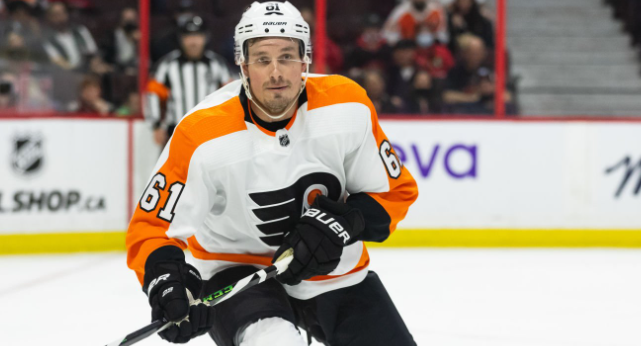 The Philadelphia Flyers traded a pair of veteran players away on Monday.

Justin Braun was traded to the New York Rangers on Monday, making the move to a second-consecutive Metropolitan Division team. In exchange, the Flyers received New York’s natural 2023 third-round draft pick. The Orange and Black now have nine selections in the 2023 NHL Draft, with three of those nine coming in the third-round.

“Justin gave us three great seasons and gave us everything he had every night,” Fletcher said in a press conference Monday. “A quality teammate, a quality veteran and a great pick up for the New York Rangers. None of us anticipated being where we are now. We thought we would be a competitive team. The vets were all excited going into this season. I don’t think any of us anticipated being here. Believe me, it hit home a lot earlier than today. When you trade a player like Justin Braun that has been such a great veteran, and again a really solid contribution for our team, it certainly puts it in perspective.”

This season, Braun has posted 16 points (five goals, 11 assists) and is a +3 while averaging over 20 minutes of ice time per-game at 20:02. Prior to being held out of Sunday’s game vs. the New York Islanders, Braun was one of four Flyers to have appeared in every game in 2021-22.

Brassard was traded to the Edmonton Oilers for a 2023 fourth-round draft pick. In addition, the Flyers will retain 50% of Brassard’s salary.

The 34-year-old departs the Flyers after playing part of one season with the team. He recorded 16 points (six goals, 10 assists) and a +6 rating in 31 games. Brassard also missed 31 games due to injury this season.

Braun and Brassard have both joined playoff-contending teams with both the Rangers and Oilers will in the hunt for postseason action.

The Flyers are 29 points out of a playoff spot.