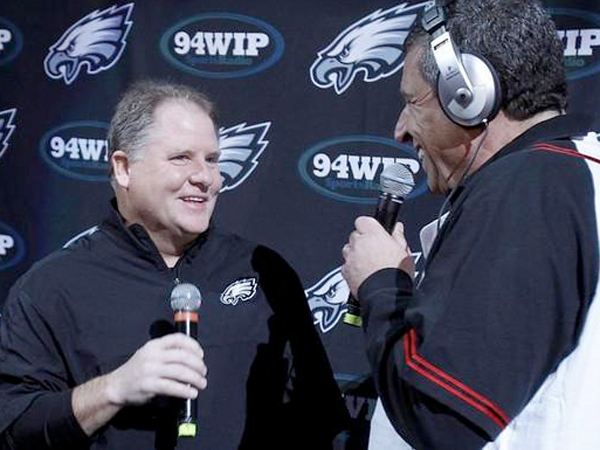 Every morning after the Eagles game, usually, Chip Kelly joins the Morning Show on 94WIP and is interviewed by Angelo Cataldi. For the most part, some softballs are lobbed Kelly’s way so he can make contact and get out of the batter’s box while he can. Today, though, Cataldi came in with some venom and he and the head coach for the Eagles had a pretty awkward exchange. Audio below via 94WIP, and transcription after, courtesy CBS Philly.

“Do you get emotionally angry after a game yesterday?” Cataldi asked Kelly. “Do you transmit that anger to your players?”

“I don’t think you have to yell at grown men,” Kelly responded. “I think every single play in that locker room is as disappointed, or more disappointed, than anybody in this city in terms of how we played and what the outcome of this game was. So for someone to have yell at them or raise their voice, they’re not two year olds. They’re grown men. They know exactly what’s going on. That’s Harry High School stuff. That doesn’t flow and that doesn’t work and that’s not what people talk about it. If that’s what people want, if people want a screamer and yeller, then let’s hire you ’cause you’re really good at it.”

“I think every thing you look at is a weekly thing,” he continued. “We had this conversation after the Dallas game—that you beat Dallas and all of the sudden it’s rainbows and candy canes and we’re gonna win the rest of our games because we beat Dallas, you know. It’s not like that. Every week is its own individual week, just like this game won’t reflect what goes on next week. We need to come back, go to work, we’re in today, we’ve got a game on Thursday, and we’re gonna go play.”

This is probably the most fiery we’ve heard Kelly sound since becoming coach, and after a loss, so we can hope that it translates to the team playing better on the field. I mean, this team was 9-3 after Thanksgiving last season. Then again, they were winning despite how poorly their offense played throughout that season. There’s really nothing to feel good about when watching this team. Have mercy.